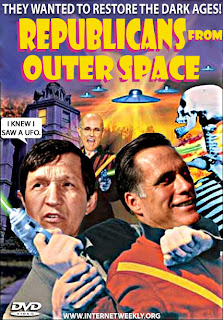 If you want to claim people are apathetic, you can always point to low turnout. But in this Spring's primary, a lot of Democrats and Republicans ran for committee slots. Lehigh County's GOP, for example, elected close to 200 committee people. That should make the selection of a party chair quite interesting.

In one corner, there's Wayne Woodman, a prodigious fundraiser who helped people like Glenn Eckhart in his race for County Commissioner last year. In the other corner, we've got Upper Milford's Grant Carter, who has no political experience or active involvement in any campaign.
Here's his pitch: "I have been a recent member of the Committee who has seen a lot of missed opportunities on the part of the current leadership, and from recent statements from my opponent, Mr. Wayne Woodman, I have every reason to believe that, should he win, the status quo would remain. After much consideration, I have come to believe that for the future of the Republican Party within Lehigh County , it is imperative that we become an active, involved Committee within the community, giving citizens a reason to believe in the GOP once again, and giving them solid, real-life examples of how we can have a positive impact on their lives."

If you don't speak Republican, let me translate for you. "Local Republicans are not conservative enough. Sure, I've got no experience, but I have a plan, man."

Lehigh County Comm'r Glenn Eckhart, arguably the most conservative member of the Board, nails Carter. "You as a committee person did nothing as Don Cunningham spent $43,000 against me. You were a committee person did not even work a poll for me in Upper Milford. I have never even met you officially. If you were concerned about conservatives and our party or our county you should have been there to help me. But you were not there for me. What makes you qualified to say what you are saying? I do not understand !!!!"

Wayne Woodman, on the other hand, helped Eckhart. "Wayne Woodman challenged me to raise $3,000.00 on my own and he matched it. He as the so called moderate status quo sought me out to help me and our party retain the majority on the Board of Commissioners. Where were you?"

Eckhart has never seen Grant Carter work a poll. "I have worked your poll at the post office many times over the years and have never seen you there."

Some conservatives within the committee are bucking what they see as the moderate establishment. There is a battle of ideas going on in the Republican Party. This is how it should be with the political process. Too bad too many Democrats seem only to fall in line behind their party. It will be their doom.

They're Republicans. They're all already on the crazy train.

I understand Eckhart's point - he's a politician and Woodman has bought Echhart's support.

Woodman - new to the Valley and himself a big donor - is tied into the likes of Charles Snelling. He is trying to buy the election, something that should be repugnant to all.

Bernie - From your blog post about the bi-county health bureau:

"No matter how interested they may be in public health, this unelected and secretive millionaires' club is decidedly unhealthy for democracy. Instead of making presentations to the elected officials who will actually be asked to spend your money, the LV Health Bureau will speak to the aristocracy first."

Woodman has a good head on his shoulders, leadership qualities, the ability to raise money and wishes to build the Lehigh County GOP up. Carter has no idea how to handle several hundred elected committeepeople who are basically volunteers.

In addition, Carter serves at the altar of Jope Hilliard, wo just femonstrated his political prowess with his Benol campaign.

Scott Armstrong, showing he knows as little about Democrats as he does about reality. Your endorsement of Carter assures Woodman is elected.

"In addition, Carter serves at the altar of Jope Hilliard, wo just femonstrated his political prowess with his Benol campaign."

Apparently Woodman is spreading the lie that Carter supporters are Benol supporters, which is not the case.

Given your allegience to Dent, you might want to consider that you are being used by those in the Woodman camp.

I've seen enough back channel emails from Hilliard to know very well that Carter serves at the altar of Joe Hilliard. I'm considering posting them.