The Junk Drawer on NPR's "All Things Considered"? 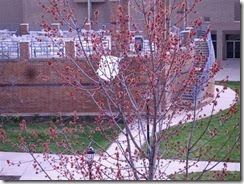 If you've never visited Kathy Frederick's popular Junk Drawer humor blog, do yourself a favor and get over there. She's living proof that you can have no interest in politics and still have a twisted mind.

As a matter of full disclosure, I should tell you that she's paid me off. I won a Major Award for leaving the 10,000th comment posted there. It's a refrigerator magnet, but I carry it with me everywhere. You never know when you might need a refrigerator magnet.
Kathy has an entire series of posts related to a frickin' plastic bag, called Windy, stuck for the last two years in some tree at Lehigh University's campus. She has shot videos, composed haikus and even baked cakes for Windy's birthday parties.

Now you might thingkshe's been committed by now, but something worse has happened. Today, NPR'S "All Things Considered" is interviewing both Kathy and Ian Frazer, who has apparently devoted his life to freeing plastic bags from trees.

Kathy is delighted. "I wanted to get the Windy story out there," she explains. She'll let me know when the program is expected to air, and I'll fill you in then.

Congratulations, Kathy, on making it to "The Show".

I thought maybe the guys would pay more attention if used baseball talk instead of saying something like "You go girl" !

Looking forward to hearing you.

I meant Windy, of course.

Bernie - Thanks for mentioning my interview. It went great. (At least I think it did. It sounded entertaining enough in my head, but time will tell).

The interview is supposed to air in about a week. I'll post about it on the blog that day, with a link to the interview on the NPR site.

I said "Windy" about 50 times in the interview. I'm certain everyone's going to think I'm a total nut job.

Im Great Britain, plastic bags stuck in trees are known as "witches' britches." But Ian Frazier probably told you that.