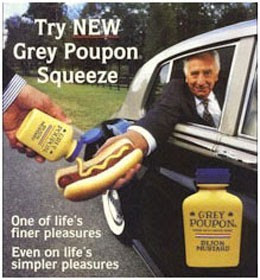 For the second year in a row, the Bethlehem Canes have won ECTB's Memorial Day Invitational, a three-day baseball tournament including ten teams from New York and Pennsylvania.

The 'Canes, a collection of 10 year-olds from Bethlehem's Northwest and Lehigh Little League, did what they always do in their opening game. Lose. Badly. The Bellport Braves, a collection of silk stockings from Long Island, pounded Bethlehem's Bombers, 13-5. Who could win against a team with all those monogrammed jerseys, matching sunshades and very own portable team banner? They even bring their own grey poupon for those ballyard franks.
Maybe they were still hung over from a wild night at Hooters, but Liberty High School's feeder team snapped out of their funk in their second game and shot for the Skippack Stars, beating them 15-3. They went home Saturday 1-1.

On Sunday morning, the 'Canes offensive machine went into high gear and drubbed the Chambersburg Americans, 13-2, setting the scene for a rematch against the silk stockings from Long Island. Bellport confidently paraded in with their banner and matching ball bags, expecting an easy win. What they got instead was a war.

Harry Faindl, our most consistent hitter this tournament, was at the plate, swinging his yellow bat. He was accidentally beaned right in the cheek, and went down in agony. In moments, his cheek was swollen to twice its normal size. He was ushered off the field as everyone ran for ice. In addition to being our hottest hitter this tournament, Harry is also our ace pitcher and catches when he's not on the mound. So losing Harry was a big loss for us. Upset coaches sent in a pinch runner for Harry, but may have sent in the wrong person because they were a little more concerned about getting Harry some first aid. After we won the game 7-5, Bellport filed a protest. Grown-ups argued an hour while bewildered kids from both teams sat in the sweltering heat.

Any of those kids could have told the grown-ups that the team with the most points wins, but it took the silk stockings about an hour to figure that out. They vowed never to return, setting a great example. 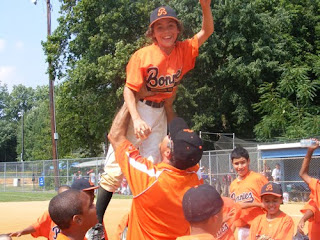 On Monday, their record now at three wins and one loss, the 'Canes faced the exact opposite of those silk stockings from Long Island. The orange and black Bonnie Braves, from Brooklyn, had no banner. Nothing, aside from their uniforms, matched. They carried older bats. Some of them shared bags. Yet they were the only undefeated team in the tournament. They were having a bonnie good time.

One giant, the father of one of the Brooklyn Bonnies, was porting a "Nazareth" T-shirt. He explained that, in Brooklyn, there's actually a high school football powerhouse by that very name.

It soon became very apparent that the scrappy little Bonnies play baseball very much like football. One of the 'Cane parents, a Bethlehem Steelers coach, was going nuts as kids collided play after play and the lead kept changing sides. Now he likes baseball.

Remember Harry Faindl, the boy injured on Sunday? He insisted on playing, despite his injury. And he was catching. How he got that mask over his bruised cheek is anybody's guess. Of course, Harry was involved in one of the collisions, trying to deny a Bonnie access to the home plate. As Harry caiught the ball and made the tag, both players went down in a cloud of dust. The ball rolled away, and this Brooklyn bomber scored to tie the game. Harry was uninjured this time. But the unprotected Bonnie had a nose bleed like an open faucet and had to be taken off the field.

As the sun beat down, Kyle Picht may have had a slight concussion during a collision while making a play at second. Kyle held on to the ball. An ump held up three fingers and asked, "How many fingers do you see?" "Tuesday," answered Kyle.

It was a rough game, especially for baseball. But the Brooklyn coaches had a much better attitude than their Long Island neighbors. Hurler David Bertolotti was leaving the mound, having pitched his heart out, when he was called out by one of their coaches. He gave David a high five.

When it was still anyone's ball game, Sammy "the slugger' Kraihanzel came to the plate. After taking a strike, he crushed one well over a 6' high fence located 225' feet from home plate. That ball is still rolling somewhere around in Amish country. That pretty much ended the game for the Bonnies, although it really was a much closer than the 10-6 final score.

After an exciting victory against Brooklyn, I expected the Canes to lose the championship to the Triple Threat Bearcats, a very good team from Bally. But the Canes weren't done, in spit of the heat. In a game played at high noon, the Bearcats were skinned 11-4. Harry Faindl pitched three strong innings.

With this victory, the 'Canes now have a paid admission to the ECTB National Championship Series. But they're taking a break until Little League All-Stars are over. These kids, who play so well together, will be playing against each other.
Posted by Bernie O'Hare at 6/01/2010 12:00:00 AM

my brother took a baseball to the cheek when he was younger. To this day he still flinches a bit when a ball comes at him. That little guy that took one to the cheek and was back the next day is a brave one.

Harrison is one tough kid. I saw his face on Sunday and figured there was no way he'd be back. But not only did he come back, but he caught one game and pitched another. And nobody hit the ball more consistently. He is hot right now.

In my book, he is the MVP this weekend. Sammy's HR and power hitting was awesomne, too.

The only thing that could have made the weekend better would have been a celebratory trip to Hooters!!!!