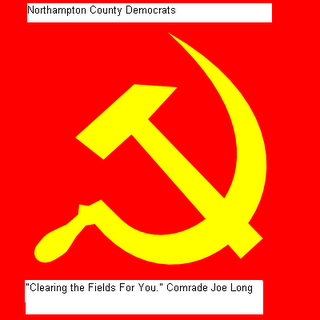 That's right, baby. Joe Long and Charles Dertinger must be ready to hurl.

If you want to know what's wrong with the Northampton County Democratic party, just look at Rodney Applegate. He's my committeeman, and has exalted partisanship over real democracy. When Northampton County Council decided to appoint a Democrat to a Republican vacancy, that was Applegate. When County Council candidate Will Power was ejected from a committee meeting, that was Applegate. When the local party decided to endorse a slate of candidates in contested primaries, Applegate was the puppet master pulling Long's strings.
I've had enough of that dude, so I wrote myself in during the primary. Unofficial results told me there was a six write-in votes, so I figured Applegate probably got the other five votes.

I figured wrong. There is actually a six-way tie for the 2d ward, Nazareth Borough. Applegate, and I each have one vote. But four other people have write-in votes, too. The fact that five different Democrats thought they would do better than Applegate is a stinging rebuke of his style of politics.

On Friday, one name will be pulled out of a hat. I don't really want it because I do support nearly as many Republicans as Democrats, and would be excommunicated pretty quickly. But I think it's important that Applegate's unhealthy partisanship, in which fellow Dems are cannibalized, be rejected.
Posted by Bernie O'Hare at 6/02/2010 12:01:00 AM

Wow! I thought this would have been a blog buster!

Hey Bernie I wrote myself in ip here in Coolbaugh Township, AND WON!!!

1 vote took the primary for me.

Just got the letter from Monroe County Board of Elections!

And that was also for Democratic Committeeman Coolbaugh 2.