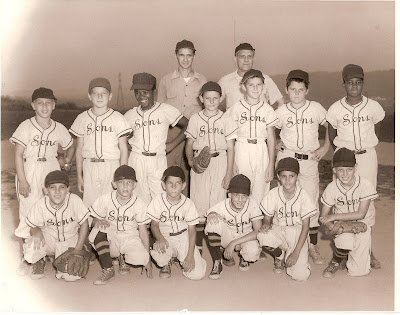 I've lost all my old baseball pictures, but was delighted to receive something from former Bethlehem City Council member Larry Kisslinger, who also served on the Bethlehem Housing Authority and as Northampton County's Republican chair.

Larry played in Tri-Village Little League, which included the tough kids from Northeast Bethlehem's low-income public housing neighborhoods. He's proud of those roots, and rightfully so.

This 1955 team picture of the Sons includes Larry Kisslinger, kneeling at the bottom left. His brother Jack is standing above Larry's left shoulder with a hat he borrowed from the Whiz Kids team. Jack was a catcher and led the league that year with 8 home runs.

Joe "Bossman" Long is not included in this pic, but his brother Mike (last kneeling opposite of Larry) played 1st base. Another Bethlehem legend, Bobby Stocklas, is kneeling second to Larry's left.

"I know and played with all Seyfried, Romig, Stocklas and other successful folks who grew up in Public Housing," says Larry Kisslinger.
Posted by Bernie O'Hare at 6/16/2010 12:01:00 AM

You have sniffed out even more athletic supporters. Good job Bernie.

Never tire of your local baseball stories. Thanks. And thanks too, Larry.

I loved the pic and should thank Larry, too, something I forgot to do when he sent it to me.