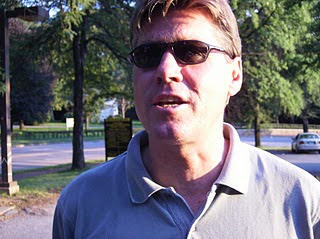 Late last week, state Democrats emailed this youtube video to local Dems, entitled "Meet Walt." It's ostensibly about something called "Demfest 2010," but its real purpose is obviously to promote Walt Garvin (pictured on the left) as Norco's next Dem chair.

Garvin's opponent, Michael Laws, is running precisely against this kind of insider politics, where a certain chosen few run things and everyone else is silenced. Last year, the county party elite actually endorsed Ann McHale for county exec against incumbent Democrat John Stoffa.

Stoffa's sin? Bipartisanship. A willingness to work with everyone. A desire to do the right thing, as opposed to what is best for one party.

Garvin was part of the LongDem machine working against Stoffa, and this video demonstrates that neither he nor his supporters understand that we are tired of being told what's best for us. We prefer to make our own mistakes.

Both candidates seem a little less than ideal. Laws seems a little flaky...I am always concerned about the dedication of people with the occupation of "business consultant" (which translates to he does not have a job or he is too flaky to hold one for more than a few months).

Garvin concerns me due to his allegiance to Long. I do think he has tried to distance himself from Long...the interview with the LV Independent was a weird though. Also, what does Garvin do for a day job?

Why bother commenting. Mr. Ohare is employing a feverish campaign of deleting comments he doesn't want you to read. He doesn't even post "deleted", he just makes it "go away".

This is what he has done with the Angle-Court blog. He is employing the method of one of Angle's hero's, Joe Stalin.

So if you want to attack Walt, go for it. this is officially a fluff blog.

The video was sent to all Dems on the Pa Dems Email List across to the state, not just local Dems.

But it was sent to local Dems, implying support for Garvin.

I heard from a friend that Ladd Siftar shook down the Bethlehem Dems for money to go to the State Committee meeting in Harrisburg. If you can't afford to go to the meeting, why get elected?

By "shook down", do you mean asked? That's probably what happened. There is no harm in asking.

"If you can't afford to go to the meeting, why get elected?"

The last thing Dems would want is people of limited means on the state committee.

What the hell has happened to the party of Andrew Jackson when someone would criticize Siftar (anonymously) bc of his financial circumstances?

I was at the Bethlehem City Democratic Committee Meeting, and there was not a shake down. Ladd stated that in the past the City Committee contributed to the expenses of the State Committee members from the City, and asked if we would be willing to do that again. They was some discussion, a few members thought that county committee should start a fundraising drive to assist all state committee members in the county with the expense. A motion was made and seconded, and the committee voted to give each member from the city $150.00 with no "nays" recorded. It should be noted that the motion was only to assist with expenses for the June meeting. Any future requests would need another approval.

I would not say he "shook" us down.

Anon 9:05, That sure does not sound like a shake down. That sounds like a party doing what it can to help people of limited means, which makes the party more small "d" democratic. The idea that someone would ctriticize Siftar over this is very sad.

I am Michael Recchiuti, the treaurer of the City Committee, and posted the message above at 9:05. I forget to put my name.