Is Angle Senile, Too? 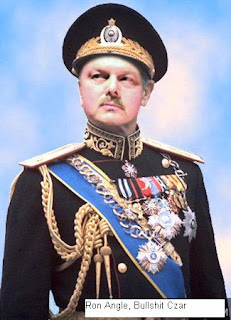 Two short weeks ago, Ron Angle was telling Express Times reporter Doug Brill that Senior Judge Franciosa, of all people, is senile. But I'm wondering whether the Northampton County Bulldog forgot to take his pills yesterday. Let me tell you what happened.

Angle called a 2 PM news conference to blast the Court. He and County Exec John Stoffa had just finished a two-hour conference with Court Administrator Jim Onembo and PJ Kim McFadden, in which they all pledged to work with each other. Almost immediately after that conference ended, Onembo fired off a letter that basically says, "We're judges and we'll do whatever the hell we want." McFadden even issued a Court Order demanding that two vacancies be filled ... now. But instead of sending the letter to Angle or Stoffa, it went to Council member Ann McHale, who just loves those black robes. That's just another snub to Angle and Stoffa. Stoffa noted the slight, but was more amused than upset. But Angle is furious and used the bully pulpit to cast a spotlight on the Court's disregard for County finances.
Now Ron did a pretty effective job of portraying Onembo as a backstabber who not only goes back on his word, but does it behind the backs of the very people to whom he pledged cooperation. (You can read Sarah Cassi's account here). But this story has nothing to do with any of that.

It's about poor Michael Duck.

Michael Duck must have drawn the short straw to cover this news conference for the Morning Call. Now Duck has that beard thing going just like Riley Yates, the Morning Call reporter whose "Dressed for Success" story made fun of an Angle Court appearance in stained T-shirt and baggy trousers with suspenders. That was below the belt (or suspenders).

Yates and Duck are physically similar. They both have some kind of beard (probably in honor of former Comments Editor Glenn Kranzley). They are also young and skinny, at least compared to most of us. But they are two different people. Really!

But Angle got them mixed up. Throughout the news conference, he repeatedly referred to Duck as Yates. "You wanna' make fun of the way I'm dressed today, Yates? Let me show you the inside of my shoes. See that? That's hay."

I've seen the two of them together so I believe him.

Embarrassed, Angle said something about having a senior moment, and later apologized to Duck.

While a funny post, unfortunately Angle is the wrong person to be the face of a budgetary battle with the Courts because of the perception of a grudge (and in politics, perception is reality, right or wrong). However, McFadden's comments jumped out at me when I read them in Thursday's paper. Much like in the Courts refusal to work with Lehigh Co on a treatment center (which you defered to the courts), I don't understand how Council -- who supposedly controls the money -- seems so impotent when it comes to dealing with the fiscal concerns of the Courts.

I do understand the need for judicial independence and how budgets could be used try to manipulate courts. Thus, the separation of powers. . . but at least some financial realism needs to enter the picture, and Council/taxpayers are the ones footing the bill.

It is truly sad that Stoffa is so impotent that he must have Angle run interference for him. Stoffa loves to be the man of peace while encouraging Angle to go on his usual crazy jag.

No wonder Northampton County has become the butt of jokes all over the commonwealth. Only two jokers like Stoffa nd Angle could actually have people feel bad for the Courts.

Could have been worse. They could have hired you like Reibman did.

The Council is afraid of the courts and Morganeeli. They dont want to be put on the black list and followed around by sheriffs waiting for them to break the law. A couple drinks after a meeting, and they get a DUI. A arguement with their spouse, a PFA. The courts are more vindictive than Angle, and they have several council members shakin in their shoes.

Ron's true colors come out. a better man wouldn't have made such a big deal out of the MCall story. I think the average reader saw it as petty. now, Ron sounds petty.

Ron didn't make a big deal out of it. I did. He was teasing the person he thought was Yates, and got screwed up.

I do think his remark about Franciosa was petty.

With this blog, you are doing the public a huge service Bernie. And most of the time you are giving us great laughs in the process. Thanks for helping the Lehigh Valley to laugh at itself.

p.s. I am someone you have said mean things about in the past.

Angle and Stoffa are both an embarrassment to the County and its residents. These two are indicative when no so bright people with little to their resume get put into positions that they are simply not qualified to handle. While I am not a supporter of the Court System, I can not fault McFadden or others on the bench for their stance. IMHO.

I bet Ron is now trying to rally the mind-less minions and have quick committee meetings to execute some revenge. Yee Haw!!!!

"With this blog, you are doing the public a huge service Bernie."

You are right, he is doing us a huge service in showing us just how inept our County Exec and Council Prez really are.

For Christs sake, its in the Bible.

Anon 12:05, If it's any consolation, I've said mean things about just about everyone. No, I am not impartial. I do try to get my facts right, although I admit I've screwed up at times. I do not consider this blog as anything more than a complement to the MSM, but I thank you for the nice words.