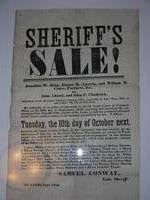 "There's no question that today's housing market is in significantly better shape than anyone predicted 18 months ago."

Obama'a Housing Secretary, Shaun Donovan, must hope that repeatedly claiming things are great will make them so. But the cold numbers tell a different tale. More than a third of the 1.24 million borrowers enrolled in the President's $75 billion mortgage modification program, have already dropped out. And in Northampton County, a record new 129 Sheriff Sales is scheduled for this July. If you add in the sales continued from previous months, the list includes 218 properties.

The previous County record was set in August 2009, when 106 properties were listed for sale.

A significant number of these sales are backlogged from the start of the foreclosure crisis. It is disingenuous as a title searcher to suggest that these are 218 new foreclosures for July.

"a record new 129 Sheriff Sales is scheduled for this July. If you add in the sales continued from previous months, the list includes 218 properties."

"Robin," You are very much mistaken. First, look at what Clem has written. Second, the biggest delay in a Sheriff Sale can only be 90 days before the sale must be re-advertised. So when you state that "[a] significant number of these sales are backlogged from the start of the foreclosure crisis," you are actually the person who is being disingenuous.

As for help from Obama, the nation reaps what it has sown.

Teh Won's current stance is that they will not even propose a budget. Orszag is leaving, Emanuel is leaving. Obama barters border security for amnesty (votes for democrats). McChrystal has been summoned home to explain potentially insubordinate comments to Rolling Stone, and Obama's first court pick voted with Ruth Buzzi Ginsberg and Clinton lefty in a weird minority that thinks it is OK to deliver aid and comfort to organizations designated as terrorist organizations as long as you say it is humanitarian. Even JP Stevens didn't buy that.

This guy is in way over his head, just like we all said he would be. But, it was hip, it was cool. Now the party's over and we are still puking our guts a year and a half later.

People who have lost their mortgages (yes, I am not saying "their" homes) because of poor planning and being in over their heads. No one to blame other than themselves.

Clem, are you taking Bernie's place as the number one Ron Angle pole dancer?

Can't claim the number one spot, but I will take the guy with all his warts as long as he keeps fighting the good fight. Bernie once called me a coward for criticizing Angle over his handling of the "Will" situation, when I said Angle should just let it go and quit getting in his own way.

So, I'll stay in the back of the bus. But I am on that bus, because that ornery old SOB doesn't give a shit what anyone thinks, he does what he thinks is right as far as his public service is concerned. Now, I hope that some of the newer conservative players have a good influence on him. Just as much, I know that all of them together don't have his will to get things done and so his leadership is needed.

Angle's only "leadership" is that while he was a member of any elected body, taxes went up. Don't believe it, check it out. When Angle serves on a body of any sort, taxes go up.

So I guess he is a leader in taxes. Otherwise, for all the smoke he blows he hasn't accomplished anything but get his name in the paper.

It is 3AM and stop giving credit to all these impostors you sick freak!

This is not Obama's fault. Blame people who took mortgages that they could not afford. Blame Alan Greenspan for telling people to take adjustable rate mortgages out when rates were at all time low levels. Blame Countrywide Financial for giving mortages to anyone who had a pulse (liar loans).