Did Villa's Lawyer Flip Off Donovan? 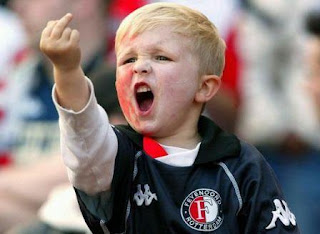 Bill Villa may have lost his ethics complaint against Allentown City Council VP Michael Donovan on Wednesday, but there's always me. He has sued me for a gazillion dollars, and a few weeks ago, I was summoned to a status conference before Judge Reibman in majestic Courtroom 1A of the old Lehigh County Courthouse. It is impossible to sit in a place like that without being impressed by the gravity of a judicial proceeding.
Unless you're Villa.

Allentown City Council VP Michael Donovan was kind enough to attend and give me some moral support. He sat quietly in the back of this venerable Courtroom, while I was closer to the well, pondering how many people had been sentenced to death there. Eventually, Judge Reibman called us forward, and I moved into the well with Villa's lawyer, rubbing my neck. As I did so, Villa turned around from where he was sitting and, in open Court, gave Donovan the finger. He later admitted this on his blog. I guess he must be proud.

I mention this because of something strange in one of the videos I shot of the Ethics meeting involving Donovan on Wednesday. When Villa attempted to monopolize the meeting and was told to sit down, his lawyer was sitting right by him. He lifts his middle finger along the side of his face and turns to face Donovan while he is doing it.

He could just be doing something with his hand, or could be giving Donovan the old highway salute.

I sent him this email: "One of my readers noticed that, towards the end of yesterday's meeting, you look right at Donovan and appear to both leer at him while briefly giving him the finger. Would you care to explain what you were doing?"

I got this response: "You really are nuts."

I agree with the real attorney!

Bill Villa is the head engineer on the REALLY CRAZY TRAIN.

Having been subjected to his incredibly nutso brand of verbal and written assault, I would wear him giving me the finger as a badge of honor.

I know it's probably hard to do, but at least try to ignore this person. It's pretty clear he may be deranged and that as such, he will not stop.

Maybe he will eventually just go away.

close look shows the index and middle finger near his face

Anon 8:03, I do ignore this person most of the time. This flurry of posts exists only because the MSM decided to cover the ethics complaint against Donovan.

I wouldn't touch your blog wars with a ten foot pole....however, just on the pic...contrary to 10:58, I have to comment that the 50 comment post a few days ago about taking 10 year olds to Hooters doesn't quite jive with then showing a 5(?) year old flipping the finger. Which is worse?

Quite obviously, the picture of a 5year-old flipping the bird is so outrageous and unexpected that it is funny. That's humor. But it would never be condoned.

As far as taking 10 year-olds to Hooters, I am against that. I understand many, maybe mst, have a different view on that point, but that's me.