Not Another Death Threat! 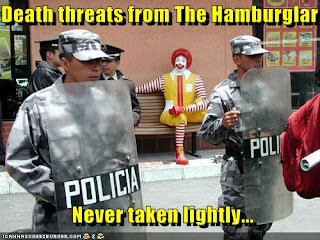 I haven't had one of these for awhile. Apparently, I've now been targeted by the The Posse Comitatus.

Three years ago, I tagged one-man fringe group and former gubernatorial candidate Sam Rohrer, a Bob Jones University grad who thankfully is a soon-to-be-former state representative. Rohrer has this bizarre notion that the state Vehicle Code has no application to individuals who exercise their God-given right to drive their gas guzzlers, drunk or sober. That's precisely the same argument used by the wingnuts in The Posse Comitatus and sovereign citizen movement. It must be somewhere in the Constitution or Bible or something.
It apparently took someone three years to read my blog and post this witty retort.

you know, when there is a revolution, these kind of forums will let us "wingnuts" know who are the best people to use as target practice and human shields. Stupid people like the author of this article deserve to be put out of their misery!

"If ye love wealth better than liberty, the tranquility of servitude than the animated contest of freedom — go home from us in peace. We ask not your counsels or arms. Crouch down and lick the hands which feed you. May your chains sit lightly upon you, and may posterity forget that you were our countrymen!" ~SAMUEL ADAMS

With support from true Amerikans like that, I just don't know how Rohrer lost his bid for the governor's mansion.

I might report this to DA John Morganelli, but he's awful busy right now pursuing a political lawsuit against Council Prez Ron Angle.
Posted by Bernie O'Hare at 6/23/2010 12:00:00 AM

don't worry bern. i'll vouch that you have no love of wealth.

The posse is a bunch of pussys. All 3 of them