Do We Really Need Tipstaffs? 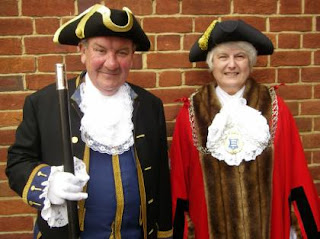 They may be relics of a time long gone, but they're still here. I'm speaking of tipstaffs (also called tipstaves), who have evolved into something like glorified butlers for judges. Just a few years ago, they were still driving jurists to work every day. They are appointed individually, it's usually a political plum or someone related to the judge or his secretary.

In both counties, full benefits are paid.

During Bloody Mary's reign, a tipstaff was shoved into the mouth of a religious dissident to prevent him from speaking before he was burned at the stake. Now I could see why Henry VIII needed them, but now that we've stopped throwing people in the Tower, aren't they a bit anachronistic?

True, a tipstaff can hunt down a lawyer while a judge is busy, but can't a deputy sheriff do that just as effectively or better? Frankly, I've long felt these are unnecessary appendages, and these court officers often detract from judicial decorum. I've seen them shove lawyers and, a few years ago, they regularly stole newspapers from the law library.

If Northampton County were to eliminate these patronage jobs, it is conservatively estimated that the savings would be $600,000 per year. Lehigh County could save slightly more.

Now it may very well be that these are indispensable court officers and the world as we know it might come to an end if we did away with them. But I also believe it is time to ask judges to justify what certainly seems like a perk. For too long, people have been afraid to question judges. That's how you end up with the cronyism and corruption recently discovered in Luzerne County.
Update (10:20 AM): Both The Morning Call and Express Times have stories about this, along with the claim by court officials that this is just revenge for Senior Judge Franciosa's decision against Angle. Perhaps this is why the Courts should have listened when Angle asked them, twice, to recuse themselves from consideration of Morganelli's politically motivated quo warranto action. And to be honest, I am the person responsible for this cost-saving idea. I first proposed doing away with tipstaffs in 2001 and renewed that argument last week. No one should be above scrutiny, not even judges, especially when it comes to patronage jobs.
Posted by Bernie O'Hare at 6/16/2010 12:02:00 AM

So the reign of revenge begins. Innocent people will be deprived of jobs and livelihoods so Mr. Angle and his County Council Clone Army can get back at the Courts.

Will Mr. Stoffa stand up to this abuse of power or will he again submit to his benefactor Mr. Angle.

It is sad we in Northampton County have to deal with our very own "reign of terror", at the hands of a megalomaniac Council President who wants to hurt people like a school yard bully.

Is there no "good man", who will stand up to this tyranny of hate and ignorance?

The problem is that Angle is right on this one. These personal servants for the judges are one of those perks we taxpayers need to stop. Drive yourself to work. This belief that the county has to provide you with a full time chauffeur is idiotic. And, guess what happens when you move on to Superior or Supreme Court, you need to get that drivers license renewed, There ain't no drivers for judges. Bring back the old times when the judges use to get free meals from the prison kitchen.

Tim would sound less whiny if he'd given a single reason to keep tipstaffs. That Angle wants them gone falls a bit short. The hyperbole is akin to an upset school girl.

the federal courts don't have them, and they seem to operate just fine.

I think the tip staff serve a good and valuable service. They are not "personal servants" of the judges. They are court officers that assist the judge with the orderly operation of the courtroom. The judges and law clerks focus on the law, the sheriff focuses on courtroom security and prisoner transfer, the tip staff focuses on the logistics of courtroom operations. They handle the jurors, coordinate motions court and act as a buffer between the lawyers/public and the judge. To move that task to the sheriff's office would result in a potential distraction from courtroom security.

That said, I agree there is a lot of down time and better uses for their services could be found during such times.

You make some good points. I'd be interested in hearing what they say, what judges say, what sheriffs say, whta lawyers say, and what spectators say. My own experience leads me to believe there is nothing they do that cannot be handled by a deputy. Part of their function has been to provide security, and that is laughable. But will sheriffs be distracted from providing security if they are doing the minimal tasks done by tipstaffs? That's a legitimate question.

A little off topic maybe, but this reminds me of the county paid constable position that is part of each Board of Elections during the voting season. About the only time they are needed is during a presidential election when lines get long; they can help keep a little order - and mark the end of the line come quitting time. Oh, and they can get us coffee too if need be ;-)

Don't get me wrong, I love these folks and they contribute to the camaraderie of discussions that take place during a slow primary election. But are most of them capable of handling any kind of altercation at the polls? I think not. They are unarmed - except for maybe a sewing needle.

No big savings here, but it is evidence of the silent little cancers on our wallets that go unnoticed at the county level.

Timmah's case is the easy one to make. Bad, bad Angle.

Fact is, everyone is finally looking under every rock for savings, and this is a very good opportunity to save significant dollars. If Angle wasn't out in front on this, Gilbert and the others would have been.

Even if the tipstaff does have some value, the position is a luxury that can no longer be afforded. Just like in the private sector, where good people who do decent work were once affordable and now are not.

Time for everyone to live within our means, including the elitists in the robes.

I was called for jury duty and was very imppressed with the tipstaffs and how they handled the jury pool, got them into the courtroom and assisted in managing them. We were in and out in less than two hours. Jurors who were selected, of course, stayed longer. The personal services are a bit anachronistic. I know that similar fed employees were dumped forty-fifty years ago. Even congress eliminated their patronage system and stopped the personal services. They are now illegal.

I am not sure 2 per judge is needed to say the least.

But while we are looking at saving the taxpayers and county some money how about are beloved Council Prez drops all of his lawsuits and appeals that are wasting resources and money?

I am sure that will match the some $600,000 in savings that removing the tipstaffs will save.

Do the judges tip them for service in the rest rooms. Like a towel boy?

The only one with restroom experience is Ohare. He is still angry that he was caught in the men's room wearing a dress by the court Administrator.

I bet this is the most discriminatory job in the court house. How many women tipstaffs are there?

There are several women and there has been ethnic diversity. Most are old white guys, but that has changed in recent years.

I agree with the comment of disagreeing with having two tipstaffs assigned to one judge. One tipstaff would be enough, except if a jury needs to be sequestered, in that case a part-time tipstaff could step in. The rest of the duties can be handled by one tipstaff. Save 50%.

That's similar to what Seyfried proposed when he was county exec. He was told to go to hell.

Every Executive has tried to cut back on court spending including tipstaffs. Every County Executive was told to go to hell.

The county Executives know full well that if they piss off the judges the jail will be bursting more than it is now.

The only difference is that all the other County Executives tried. Stoffa just whines. Christ, that is all this guy does. Piss and moan. Someone give him some cheese to go with his whine.

From a jurist's point of view, the Norco courts are a fantastic example of inefficiency. I suspect this isn't Norco specific, but haven't been called in another county.

How much time of the good people of the county is wasting "just in case" a judge needs a pool? How much time do judge's waste while lawyers deal at the last minute?

Seems to me if you actually had judges doing work from the bench for most of the day, you'd need less.

And if a case isn't settled 48 hours before it goes to trial, it is either heard or withdrawn. More the deadline back, and the plea bargains and settlements will come earlier.

In order, the courts operate for the convenience of the judge, DA, defense, citizens, and lastly the accused. Seems to me citizens should come first. That would require the judges to realize who pays their salary and benefits.

Regarding the comment of using the election day constables. We are there for 2 reasons...

It is our primary job duty and responsibility and..

It is STATE LAW we are Mandated to be there or be arrested.

Change the law and we can pick and choose where we are needed and for which election...until then we are required to be there for sometimes 16hrs for $95.00!

Fred, my polling place has been without a dedicated constable for a few elections now (after the previous one passed away). So I'm not sure how mandated or required it is. The tone of your response appears to indicate that you are OK with the status quo.

All I know is that I don't think the absence of a constable (in most elections) is all that earth-shaking. I'm not sure if anyone would really miss them.

I was merely suggesting that it's an expense that could be examined in these days of cost savings.

(Sorry Bernie, this is really OT. Sure would appreciate you doing a post on how PA conducts its elections; covering everything from OPEN/CLOSED primaries, moving election day to multiple weekends - instead of ONE TUESDAY, and moving our Presidential Primary date up earlier before it's a foregone national conclusion).

Thanks for your input, actually I'm not really that gung-ho about doing it but it is my elected duty and is mandated by law.