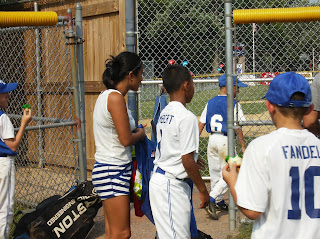 Although yesterday's hot sun slowed everyone down, Northwest Little League's ten-year olds quickly came to life when some lifesaver offered them baseball cupcakes after yesterday's game.

It's that time of year. All Star Tournaments for District 20's fifteen teams have been underway since Thursday. Here's the way it works. You play until you've lost twice. At my grandson's 10 year-old level, it is possible to advance from the district all the way to the state championship. For older groups, it's the world. They might play teams from Latin America or Japan.

Locally, Lehigh Little League has dominated the 10 year-old division over the past ten years with two district, 5 regional and one state championship. But to do that this year, Lehigh's bombers - which include power hitters like Sammy "the slugger' Kraihanzel and golden gloves like Kyle Picht - are going to have to get past Northwest. Harry "the Heater" Faindl has been hurling sparrow missiles in his last few outings. Forget MLB, the Pentagon wants him. And slugger Tyler "T-Man" Anthony knocked a weather satellite out of the sky in his last at-bat.

Of course, these kids know all this. They go to school together, live near each other and even play with each other on the Bethlehem Canes, a travelling tournament team that just won ECTB's Memorial Day Invitational. They are friends who will likely be playing together at Liberty High School in a few short years.

So it's no surprise that in yesterday's sweltering heat, Lehigh's kids were among the fans rooting for their friends at Northwest. Sammy and Kyle were signing autographs, along with another Lehigh slugger, young David Bertolotti. Everyone calls him "The Mayor" because he's so damn friendly. Even the umps love him.

Northwest's hitting was too much for North Central, and after 5 1/2 very long innings, the final score was 14-5. A barrage of singles and doubles won the game. That was Northwest's second win. In their first outing on Thursday night, they pounded Southside Bethlehem, 12-6.

But Lehigh has two victories under its belt, too. Despite being behind Hellertown 9-3 on Thursday night, they came out on top of that game, 17-12. Then they just demolished a combined Northeast Bethlehem and Freemansburg team on Saturday, 22-0. 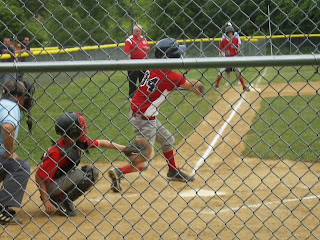 So this Wednesday night, at 6 PM, Northwest will face Lehigh. Next year's bragging rights are on the line. Losing team lives to fight again, so it's very possible these teams will face each other twice. Once all the dust has settled and only one team advances, I am certain that the other will root their friends on and mean it. Both organizations have produced some classy ballplayers.

Of course, Lehigh and Northwest need to keep an eye on Nazareth, which also has two wins.

Here's how things look so far.

"And slugger Tyler "T-Man" Anthony knocked a weather satellite out of the sky in his last at-bat."

Bernie, These stories about kids and sports are always your best work.