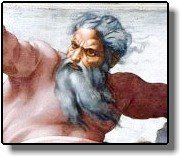 "My concern is not whether God is on our side; my great concern is to be on God's side."
Abraham Lincoln

I live in Nazareth, Pa. You can call me Bernie of Nazareth. It's a quiet little town, mostly white, and was originally settled by Moravians, our nation's first communists. They had "love feasts" and promoted tolerance by requiring gender segregation, although that didn't last long. Over the years, Nazareth has morphed into a town very much like any other Northeastern town, where neighbors don't know or speak to each other, and we awake each morning to a fresh layer of cement dust. There could be more black people than I think, but it's hard to tell with all that cement dust.
On my way home from work on election night, I saw something you never see in sleepy Nazareth - a spontaneous demonstration. A group of people at Broad & Belvidere proudly displayed Bush signs that read, "Vote God's way, not man's way." On the opposite side of the street, a lone couple countered with one Kerry sign. An active Kerry supporter, I stopped my Jeep and joined in the fun. Numbers on both sides grew as the evening progressed until demonstrators occupied all 4 corners of the intersection.
The original Kerry supporters, it develops, were carpetbaggers who had come down from Manhattan for the day to tell us how to vote, but they soon left for Starbucks and were replaced by lots of local residents, mostly high school kids and young and slightly inebriated adults. (We were outside of a bar). The Bush group manning one of the corners with the God signs were part of some youth prayer group. They condescendingly told us we needed to read Scripture when we told them Jesus was a liberal. They also called Kerry a murderer although he hasn't killed 100,000 Iraqi woman and children. One of the anointed, a big burly guy, crossed the street, called me a "faggot," and then hopped in his car to speed off without leaving his phone number. And a male member of God's club told a female Kerry supporter to suck his dick. Haven't seen that expression in Scripture, although I've read a phrase or two about faggots. Yikes! I have to stop wearing those flashy socks.
My conclusion was that this group of nuts is marginal, borderline insane, and could actually damage Bush's candidacy. What sane person is going to listen seriously to homophobic rants about gay marriage, or as Margartet Cho says, al Gayda? Turns out that 51% of us listened. Bush even won in love feast Nazareth by 9 votes. His appeal to "family values" and that kind of stuff are supposed to be what did the trick. The only groups who roundly rejected him were al Gayda, young white males, who could get their heads blown off by an IED in Iraq, and blacks of any age or sex, who could get their heads blown off by an IED in Iraq or anywhere in the deep south.
Some of these religious wingnuts have gone public, telling us "the liberal Democrats oppose God's will" and that "Jesus speaks through the Republicans. The Democrats will not be able to win elections until they renounce their sinful ways and stop encouraging abortions, gayness, and trying to take away our guns." Gayness? What the hell is gayness?
In Alabama, the "Christian" coalition and Ten Commandments Judge Roy Moore successfully killed amendments to the state constitution that would ban segregation and poll taxes. So in addition to homophobia, bigotry is another of the family values being promoted in the name of God.
What the hell could God be thinking?

Guys like O'Reilly, the phone sex addict, and Newt Gingrich, who dumped his second wife for a much younger model, say liberals have no family values and mainstream American is fed up with our bullshit. I'm pretty liberal. I respect a woman's right to choose and don't mind if two gay gals or guys want to call themselves "married." Knock yourselves out, I say! I don't like it when we start a war to grab what's left of our fossil fuels, and I don't go to church. The last time I went was Palm Sunday so that I could give my 4 yr. old grandson some exposure to religion. I had forgotten Palm Sunday is the longest mass for the entire year and almost died of old age. On my way out, I noticed all kinds of brochures in the back. They were checklists telling people how God wants them to vote in the primaries.

People who go to church all the time claim to know God pretty well. I do go to a diner every Sunday in Nazareth where churchgoers eat after worshiping. I bask in their auras and hope some of their goodness rubs off on me. I was there with my grandson on the Sunday after the election, and we were treating ourselves to pancakes. The very next table was occupied by four of the Chosen Ones. (They didn't have an aura, but wore their finest clothing). I could overhear bits and pieces of their conversation as my grandson and I gave each other goofy looks. Didn't hear God mentioned too much, but I heard a hell of a lot about Falluja. A nicely dressed old lady opened her mouth, and as toast crumbs fell to the floor and all over her, she angrily insisted Bush had waited long enough and we need to go in and level that city now. Her three breakfast companions gave a few "Amens" and pieces of bacon and scrambled eggs fell from their mouths. "Turn it into a parking lot!" I don't hear anything about the innocents who would be killed, but these folks didn't seem too concerned about "collateral" damage. I wanted to say, "Wake up!" "Don't you know you're promoting the loss of innocent life?" Something pompous like that. But heh, it's Sunday, and I guess these folks are entitled to be left in peace.

Later that day, I checked the news on the "Internets." Holy shit! Those religious people at the diner had it right! First, I read an account from AP that US troops had gone into Falluja and "secured" the main hospital, but would not allow doctors inside because they will tell reporters about the civilian casualties. Better to let them die. Then I read another account from BBC reporting that US forces had completely razed another hospital, run by an Islamic charity, with "precision" weapons like WWII era howitzers. And before they started Operation Whatever, a bunch of evangelical Marines actually dressed up like Gladiators, anointed themselves with oil (there goes some more fossil fuel), and actually compared themselves to David facing Goliath. I'm not seeing that analogy. To make matters worse, I heard Pat Robertson on Fox telling everyone that it's so wonderful we've finally attacked Falluja, and he didn't express any concerns about the loss of innocent life or the Geneva conventions that prohibit attacks on hospitals. No one seems to care that soldiers refused to allow males to leave the city in advance. How is this different from what the Wehrmact did to Warsaw or what Romans did regularly to Jews?

I think they have the wrong God.

The born-again Pharisees who reelected Bush are not so different from another group that promotes murder and intolerance in the name of their God. No good God would ever sanction suicide bombing, blatant discrimination against race, or wholesale murder of innocents, whether it is the Twin Towers or 100,000 civilians in Iraq. I am not a religious person but seem to remember that.

Once, a man lived on this strange orb who told us to love one another, even our enemies. He was not a rich man, had no education, and had a soft spot for children and the weak. He resented those who perverted religion to promote intolerance or nonsensical adherence to religious principle. Some say he was crucified for his troubles, but some people listened to him. Where are they now?

Not too long ago, another man inhabited this country. He was not a rich man, had no education, and also had a soft spot for children and the weak. When the US unilaterally attacked Mexico in a blatant land grab, he spoke out against it. Of our enemies, he warned we must have malice toward none and charity for all. He was also murdered for his efforts. Some people listened to him, even Republicans. Where are they now? Those are the people with values.