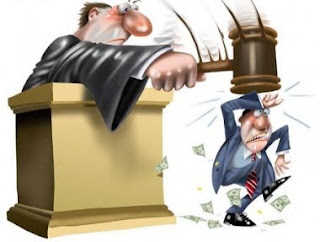 Below is Senior Judge Michael V. Franciosa's bizarre five-page Order, filed late Thursday afternoon. You can read it yourself and reach your own conclusions. I'll make the following observations:
1) Franciosa sure pats himself on the back. He uses words like "painstaking," "comprehensive," and "searching" to describe a decision that ejects someone from office without even a passing reference to something called the people's will, except for the 1977 vote to enact the Charter.

2) Franciosa does incredibly argue that the people's will would be thwarted if he were to allow Ron Angle to continue participating on Council because they voted for the Home Rule Charter. Of course, that argument is a fallacy, relying on the assumption that everyone interprets the Charter exactly like him.

3) Franciosa again concedes it is a "ambiguous statutory provision," but refuses to give the benefit of the doubt to the person against whom the Charter is being enforced.

4) Franciosa's reference to a "cumbersome reinstatement process" for Angle, in the event of a reversal, is nonsense. If the State Supremes reversed Franciosa, there is no mechanism providing for Angle's subsequent reinstatement.

5) Franciosa's refusal to allow Council to fill an Angle vacancy is a violation of the Home Rule Charter, the very instrument he pretends to be enforcing. Section 105 requires Council to appoint a person to fill a vacancy created by an elected official's removal from office. After noting that the voters approved the Home Rule Charter by referendum and stressing the danger of frustrating the will of the voters, he completely negates a provision, failing to provide Council itself with notice or opportunity to be heard.

6) By insisting that Angle's office - a district seat - remain in limbo during the appeal, Franciosa thumbs his nose at the right of Slate Belt voters to elect their own representatives. That's not just a basic right of the Home Rule Charter, but the right to vote is embodied in five different amendments to the US. Constitution. Are Slate Belt residents now second class citizens? Isn't this just as arrogant and prejudicial as the poll taxes once imposed in the deep South to suppress the black vote?

7) Francisoa takes "judicial notice", without a request from either party, that "County Council has in the past operated for a considerable period with an unfilled vacancy." That is simply untrue. At no time since the inception of Home Rule has a Council vacancy gone unfilled for more than thirty days. Although a judge is permitted to take "judicial notice" of facts susceptible to "accurate and ready determination," Franciosa took judicial notice of a lie.

Under the Pennsylvania Code, "A party is entitled upon timely request to an opportunity to be heard as to the propriety of taking judicial notice and the tenor of the matter noticed. In the absence of prior notification, the request may be made after judicial notice has been taken."

Since Franciosa's Order has essentially interfered with the workings of Council and the people they represent, and since he has done so on the basis of a falsehood, I suspect Council may intervene in this matter and ask Franciosa to reconsider an Order that appears to be tainted by bias.
Franciosa Stay Denial
Update (9:30 AM): I must have forgotten to spellcheck this post and have just corrected a number of typos. My apologies.
Posted by Bernie O'Hare at 6/14/2010 12:00:00 AM