MoveOn to Cry Over BP Oil Spill Outside Dent's Office 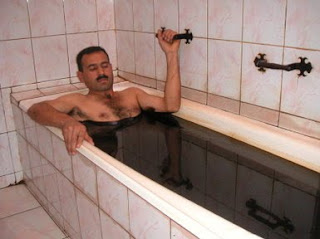 Did you know that LV Congressman Charlie Dent's grandfather spent 40 years delivering natural gas to people? MoveOn.org must have found out.

On Wednesday, at 4PM, they'll cry over BP's spilt oil outside of Congressman Charlie Dent's Bethlehem office. It's all his fault. They apparently also have secret evidence that he's cooking up a "Big Oil Bailout." They want him to order BP to pay for all damages without regard to any cap on liability, even though BP has already pledged to do just that.

MoveOn Regional Coordinator Steve Nathan and his minions will drive their SUVs and other gas hogs from around this area to claim Dent needs to support some Bill, but never bother to identify it. I guess it's the thought that counts.

MoveOn also reports that Dent gets all his campaign money from Big Oil, just a few months after saying it was Big Insurance.

No word on whether John Callahan is driving over to cry about spilt oil while simultaneously claiming he has no position of his own and people should stop asking him rhetorical questions.
Posted by Bernie O'Hare at 6/07/2010 12:40:00 AM

you tone deminishes the travesty of this episode. a few weeks ago you bashed obama for poor managment on this front and now you are trying to cover dents butt.

Obama is the single, largest recipient of BP political cash. And MoveOn supported the guy. They're oilier than Dent.

Anon 8:59 is a clear demonstration at how the GOP routinely fails at governing.

You're doin' a heck of a job, Brownie.

Because Obama can just part the Gulf and lead the disaster workers to the promised pipe. Turning this on Obama is laughable but it to be expected.

I bet not one person is here is doing anything to reduce their oil consumption.

It's much easier to just point fingers.

Spills happen all the time around the world and as the oil is becoming more difficult to extract, they will continue.

The oil compaines make no attempt to clean up the massive spills they cause in Africa extracting oil for the USA. This is just all for show. This leak is small compared to what they do around the world.

Who is willing to try to conserve? Anyone?

If there's anything this spill should show us is that there's plenty of oil available. We're now approaching Day 50 and that hole is still spewing strong. And that's just ONE of the many wells in the Gulf.

Imagine if we allowed oil companies to drill on land - we'd have an abundance of oil and minimize the environmental risk.

By the way, when will Obama be opening a new nuclear power plant?

That better be coffee in the tub, cause that guy committed a crime if its oil allowed to go down the drain.

BP will not permit their favorite politician Obama to bomb the well because they're investment is too great in both Obama and the oil - and the oil is theirs, after all. Heck of a job, Brownie.

Where do you get your pictures? They are often the best part of your blog.

BTW, many people are doing much to conserve.

Everything our communities do to make them more pedestrian, bicycle and transit-friendly gives us transportation choice.

Every time someone opts to live in a borough or city, a community with a network of sidewalks, and then chooses to walk to the corner store or neighborhood restaurant is literally taking a step in the right direction.

People are also starting to wake up to the insanity of owning an SUV, which not only guzzle gas but pollute the air at double the rate of a regular car.