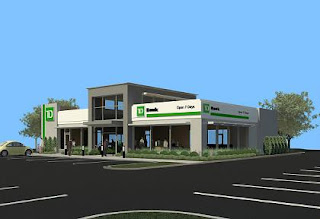 What is a LEED (Leadership in Energy & Environmental Design) building? It's a green building certified by the US Green Building Council. On Thursday, Bethlehem planners unanimously approved a "Leed Platinum" TD Bank at Five Points. Chairman Larry Krauter stated, "This might be the first time we've had a LEED Platinum , at least during my time on the Commission." Platinum is the highest certification possible. This carbon neutral design is also a first for TD Bank in the Lehigh Valley.
TD Bank plans to build between five and ten "green stores" this year, which will reduce energy consumption by 50 percent compared to previous designs. Nearly 20 percent of the bank's energy will come from onsite solar panels, including a solar drive-thru canopy.

Plans for this proposed carbon friendly bank, located at the site of an existing gas station and convenience store, ironically call for fewer trees along Broadway and Wyandotte Street than provided for by City Ordinance. Environmentally sensitive or not, a bank is still a bank, and needs to be visible. Bethlehem resident Bob Pfenning proposed a trade off, recommending that planners allow TD Bank to plant trees acceptable to the City at some other location.

Speaking of trees, Freedom Lawn Care's plan for a landscaping business at the southeast corner of Cherry Hill and Ringhoffer Roads, was also unanimously approved. Owner John Inglis told planners he will store stone, mulch and other landscaping supplies at this 3.34 acre site, which his truck fleet will then deliver to various customers. There will be no retail sales.
Posted by Bernie O'Hare at 6/11/2010 12:01:00 AM

Meh. With all that pavement, the benefits of the "green" building are a wash.

Why do banks continue to construct buildings they don't want customers to actually visit?

And why do they leave the vault doors swung wide open, but chain 19-cent pens to the counters?

was callahan present? he sure ian't in city hall. rummor has it that kelly is running the city

Interesting...this site is currently owned in part by a Bethlehem planning commission member.