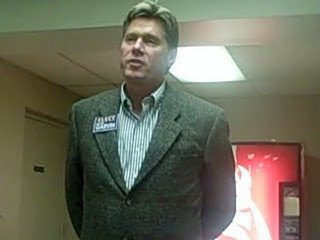 Thanks to three disallowed proxy votes, Walt Garvin is the new bossman for Northampton County Dems. This party insider eked out a narrow 42-40 victory over reformer Michael Laws in majestic Courtroom #1. Although I supported Laws, Garvin won in a fair fight. Even I understood why those three crucial proxy votes, which would have changed the results, were disallowed. Let me tell you the story.
This afternoon, I was tipped off that party bosses, who knew I was supporting Laws, would attempt to get rid of me and not allow me to vote. I do support Republicans like Charlie Dent and Ron Angle, and that may be a violation of some rules somewhere. I was ready to argue that since Joe Long himself was illegally elected four years ago, they were in no position to enforce rules against me at a reorganization meeting.

Instead of trying to eject me, these local honchos were much worse. They were actually polite to me, allowed me to sign in, and even gave me my official Dem committeeman certificate. At the beginning of the meeting, Bossman Joe Long announced their "only" purpose that night they were meeting was to pick a new party chair and vice chair. So I was in.

It met some people for the first time, like Sestak campaign director Bar Johnston. She could easily be a model. I used to bug Ladd Siftar all hours of the day and night when he served on County Council, and when I saw him last night, I couldn't help going over and talking to him and his friend, Olga. I also had a pleasant chat with Maria Dertinger, who I like to call the "nice" Dertinger.

Mike Fleck went out of his way to be nice, pointing out that Ron Angle and he are tight. And when 18' County Exec Stoffa dropped in, Fleck pointed to him and said, "Even John Stoffa likes me."

"Angle and Stoffa aren't always right about everything," was my snotty answer, but Fleck was still nice. He has to be. He's a pol.

Easton native Darcel Gibson, who works in the Civil Division and was just elected to the Dem committee for the first time, was sitting in one of the pews, soaking it all in.

Almost as soon as the meeting started, somebody objected that Joe Long needed to step down as party chair and appoint a temporary chair to conduct the election, pursuant to the bylaws. Instead of throwing a hissy fit, he stepped down gracefully. He appointed Charles Dertinger interim chair.

Garvin and Laws were nominated and allowed to give brief speeches about themselves, and then elected committee persons were allowed to cast secret ballots.

I told you about three proxies. I had one of them, given to me by a committee person unable to attend last night's meeting, and allowing me to cast her vote. Michael Laws had two.

But we were prevented from casting them. Aware that the bylaws permit proxies, I objected. But Joe Long himself showed me the actual language, which provides that a committee person's proxy must be given to another person in that district. Laws had the same problem with the two proxies given to him. So though they would have changed the results, I agree they were illegal.

Mindful that this was no mandate, Garvin pledged to end the divisiveness and rancor within the local Democratic party, and was immediately asked what he intends to do about the BP oil leak. Actually, he might have an easier time with that.

Long pointed out that there are 137 elected committee persons, but there could be a maximum of 298.

actually her name is Kiki Schock.
btw i was really undecided between mr Garvin and mr Laws. then i decided for the first. i would have liked to know what happened if i voted for mr Laws and there was a tie...

Thanks for getting me the correct spelling. I've updated my post to reflect that.

I guess a tie would require a new ballot. I think they lock the doors and leave you in there until you come up with someone.

I saw you at last night's meeting and finally decided to check you out. I am pleasantly surprised. Your story is entertaining and factually accurate.

137 elected members and only 82 showed up to vote, wow. I hope notice was sent out.

I think the NorCo Dems need to update their bylaws. Allow absentee ballots, first and foremost.

Also, they need to do away with the fact each voting precinct can only elect 1 male and 1 female committee person. Lehigh County does not have that requirement and has much more participation. I am sure that some precincts have 2 females or 2 males who are willing to serve, but not one of each.

Did anyone notice that proper identification was not required of anyone last night? People simply walked up with proxy letters and it was assumed they were said stand-in. How did they know that those folks resided in the same precinct as the committeeperson they were standing in for if no I.D. was required? When confronted by the fact that three sealed envelopes with proxy letters in them were put into the ballot box(or bowl, as it were) by Joe Long, Charles Dertinger first pretended ignorance that the bylaws require a proxy to actually attend the meeting in place of the committeeperson, then he opened the three sealed envelopes containing three proxies and said "this person is here" about all three proxies. Where votes cast for those proxies? Why didn't they bring forth their proxies and get a ballot themselves, like everyone else. Where they actually present? Doesn't it seem like they threw out proxy votes arbitrarily when you consider the fact that no procedure was in place to properly identify any proxy as eligible in the first place? Why would Joe Long even put those envelopes in the bowl?
At least two State Committee members voted in the election last night. According to the County bylaws only the two elected committeepersons from each precint county-wide are eligible to vote for the Chair and Vice-Chair. Read the bylaws please and correct me if I am mistaken, but it looks pretty clear to me. That would be two more votes that were improperly cast last night. I'm glad everyone was nice to you last night, Bernie, but that doesn't mean everything was above board.

This is like Raul Castro taking over for Fidel.

I had no time to read the previous comments so I apologize if this was discussed already, but I am one of the new Dem. ward reps (West Ward of Easton, 8 West) and I sent a proxy vote with a certified resident of my voting district and a witnessed signature. Are you telling me that my vote was rejected or were there more than two other proxy votes that were counted. I may have to rip someone a new one if it's the former.

Upon re-reading the original post, it seems the three proxies in question were those other than mine. Hard to believe someone running for the office (and whom I voted for as well) didn't know the rule for voting. I managed to find out how to do it and I just started this gig. I hope this isn't a sign of what we have to look forward to.