Will Callahan Close Gitmo From the Git' Go? 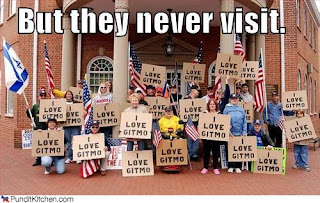 Congressional candidate John Callahan recently met with a group that advocates closing Gitmo and holding trials for dangerous terrorists in America, possibly even in Pennsylvania. I don't know whether Callahan actually agrees with a group calling itself Human Rights First, but The Hill reports he is meeting with them.

LV Congressman Charlie Dent, as a member of the Homeland Security Committee, has demanded common-sense use of military tribunals for foreign terror suspects at Gitmo’s facilities, which were designed for that very purpose. In anews release on this subject, Dent poses the following questions:
1. Does John Callahan support closing Gitmo? If so, how?

2. Does John Callahan believe American soldiers should be reading Miranda rights to terrorists they capture on the battlefield?

3. Does Callahan believe American soldiers should face criminal charges for violating the civil rights of terrorists?

4. Is Callahan willing to require our military soldiers to gather forensic evidence on the battlefield for a prosecution in a civilian American court?

5. Does John Callahan honestly believe that foreign terrorists should be imprisoned and tried on American soil?

“These are not academic questions,” Dent said. “Consider that a location in Western Pennsylvania was put forward as alternative site to New York City for the Khalid Mohammed trial. This is an important issue that hits home.

“Instead of listening to a plan that even the Obama Administration is quietly abandoning, here’s who John Callahan should listen to – the families of these terrorists’ victims, some of whom live right in our own community. He should get the thoughts of the men and women in uniform who captured these individuals and who right now are fighting for our national security in Afghanistan, Iraq, Pakistan and elsewhere. And he should heed the opinions of leaders from both parties who know the cost and security risk of terrorist trials in our own backyard.”
Posted by Bernie O'Hare at 6/10/2010 12:03:00 AM

First, let me state that this is in no way endorsing candidate Callahan. Far from it.

That said, my question for Democrats and Republicans alike: before we hide behind "dangerous terrorists", and thus shut down any discussion as taboo, just what does Dent or Callahan, or Obama, or anyone plan to do with those we hold in Cuba?

I recall this past Memorial Day, reading an article in the Express about a former U.S. POW who was held in a satellite camp of Buchenwald. I have an old Army documentary on the Nazi concentration camps, and in one scene a U.S. soldier is interviewed about US servicemen kept in the camps and their treatment (actually, I might be hitting close to home with the Slaughter House Five). A few summers ago I read a book on American POWs in Southeast Asia 1961-1973 (actually I think that was the title). U.S. servicemen have been grossly mistreated, and even killed.

I guess before candidates get all sanctimonious about "protecting us"...candidates who have never served in war time...why have we held prisoners for several years while I believe only three ever being convicted? We certainly have believed it wrong when U.S. soldiers were mistreated as the "enemy combatants". If we can try our own terrorists like Timothy McVeigh with Constitutional due process rights, why can't we convict those at "Gitmo", whether in the US or at Gitmo...whether civilian or military...but with some resemblance of due process?

I have a plan to move Gitmo to Bethlehem Township.

Apparently the brain trust that worked all the angles on this issue during the campaign has reevaluated the situation and put a hold on closing GITMO. That should give all those who still clamor for civilian trials in the US courts good reason to pause and reconsider their position on this issue. One would think that there must be very good reasons for the administration’s about-face on this.

I thought all the Gitmos closed already. They were part of Circuit City right?

It is interesting to note that this issue is no longer Left versus Right but Left versus Left.

the boy mayor can't even commit himself to bethlum - how can u expect him to commit to national or worldly issues?

"Does John Callahan honestly believe that foreign terrorists should be imprisoned and tried on American soil?"

I honestly believe that the terrorists should be tried by a military tribunal. That being said, I am embarrassed that we don't have the terrorist tried and imprisoned on American soil. If we can't do that, then why are we at war? If we can't show the world that we're not afraid to put these terrorists away, then what are we doing? It's time we stood up and take responsibility for those in captivity. They must go before the military tribunal, now, or the world looks at us as if we're running concentration camps.

"Does John Callahan believe American soldiers should be reading Miranda rights to terrorists they capture on the battlefield?"

I don't even think that terrorists fall under the Geneva Convention, never mind Miranda rights.

John Callahan will think what Nancy Pelosi and Barack Obama want him to think.

Mr. Armstrong,
it is not often that it is implied that I am liberal. I may not view myself as a neo con, but conservative none-the-less.

Also, I do not advocate closing GITMO as you also imply. If you re-read my statements I also do not say it must be civilian nor do I say it must be on US soil necessarily.

At what point do we have some sort of tribunal (military or civilian) to render justice, whether it be continued imprisonment, or yes, even the death penalty? or, we might even find not all are guilty and deport them. However, at what point do we say we are not afraid of our own values? God will judge their souls. But as a Republic, the spirit of the rule of law should ultimately prevail.

I still remember the disgust of seeing a video of a US soldier, whose charred body was dragged behind a truck and hung from a bridge in Iraq. No rule of law, no justice. The fact that some of our enemies are beasts, should not mean that we stoop to their level and abandon our AMERICAN values.

gee whiz, I thought this election was about being mayor of bethlehem. What's gitmo have to do with running bethlehem?

"The fact that some of our enemies are beasts, should not mean that we stoop to their level and abandon our AMERICAN values."

That is EXACTLY what they are counting on.

"gee whiz, I thought this election was about being mayor of bethlehem. What's gitmo have to do with running bethlehem?"

"gee whiz, I thought this election was about being mayor of bethlehem. What's gitmo have to do with running bethlehem?"

It was Callahan who decided to run for two offices at once and assured us he could be both Congressional candidate and full-time mayor with a full-time salary. Here's his chance to prove he can do two things at once.

Callahan should rethink this avenue. I know that he has to appeal to the left wing of his party -- but these generals are off base and Callahan is going to lose a great deal of support from the middle if he pushes for civilian trials for terrorist suspects caught on the field of battle.

At what point do they(our self professed enemies)decide we are not the Great Satan and end their war on us? Until then, what choice do we have?

hear callahan was running all over town looking for a toy called gitmo. can you spell L O S T and IN OVER HIS HEAD?