Who's the Mad Dog? 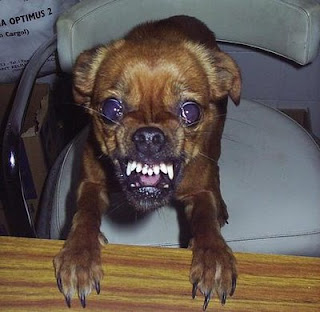 Northampton County DA John Morganelli, a spin master of media manipulation who conducts about three times as many news conferences as Ron Angle, has already called Michael Ballard's quadruple homicide the slaughter of a "mad dog." When telling newsies about Ballard's car accident not far from the murder scene, Morganelli adds, "He'll be alright, unfortunately." Already, there are stories about Ballards KKK ties and child molestation claims that the DA says were too weak to prosecute, although he made sure they appeared in the newspaper.

All of this - from the statements to prejudicial information fed to reporters by Morganelli - is prosecutorial misconduct, and from a long-time DA who knows better. It's the kind of behavior that could be labeled "harmless error" in light of the overwhelming evidence against Ballard, but could also result in expensive sanctions like a change of venue.

Now don't get me wrong. I know how everyone feels about this guy, and I'm no quadruple murder fan. But in addition to being unfair to the accused, Morganelli's conduct has already cost taxpayers thousands. Any defense lawyer who fails to seek sanctions for this prosecutorial misconduct will himself be later accused of ineffective assistance. Disposing of that motion is going to waste judicial and prosecutorial resources, costing all of us money.

i believe mr. morganelli is human , while i understand his position ,i completely agree with what he said about mr. ballard i think many other folks think and have said much worse including me ,i'm glad to know the district attorney is a human being with true feelings and emotions in what must have surely been a very sad gruesome scene ... give him break !

I know you're itching for a chance to bash Morganelli, but I think you're really reaching here. He made similar statements about the triple homicide suspects and they were all successfully prosecuted. I can't see these comments resulting in any kind of sanctions. And a change of venue motion probably would have been inevitable anyway just given that fact that it was a heinous crime covered by the newspapers...

I don't know if any of Morganelli's comments are sanction-able, but this should not surprise you at all. The local rags get most of their "local news" from local pols and police, and just basically write what they are told or is on an affidavit. Morganelli is doing what he has always done, while you, apparently, are just taking notice.

For example, as I wrote before on this blog on June 21, 2010, The Morning Call ran a story on June 10 entitled "Police: Woman's infant suffered from 'extreme malnutrition'" on page B4 with a 5x8 picture of the accused mother.

Don't think Morganelli didn't know that this was being published. And even if he denies knowing, you know that someone at the papers called him or one of his minions looking for comment. It was irresponsible on the part of The Morning Call for publishing the story in the manner that they did, but it happens time and time again. They didn't publish the pictures of accused rapists or child molesters, but they did a big story on the attractive mother who is accused of child neglect (but not convicted).

A quadruple homicide, on the other hand, certainly deems the space and coverage it has received. Morganelli knew what he was saying and knew that it would get reported. They did not have to report it, but he knew they would.

Both the press and Morganelli are responsible here, but this has been going on for a long time and will continue to happen. The news can be very biased and we all tend to get mad when it is a bias we do not agree with.

Wow Bernie, I am certain we all no you of all people should not be talking about the alleged wrong doings of an attorney.

Morganelli has been found guilty of nothing, you on the other hand are a different story.

I think it is best you leave your comments about lawyers to yourself, as you should be the last person to be speaking of it.

Morganelli is what happens when a local punk works hard, punches the clock in friendly environs and steadily moves ahead. He's still a bitter little local guy, and the rest of the state has this figured out, however.

In that his wet dreams of statewide office are as worthless as his schlep to Pittsburgh for a briefcase full of Onorato campaign cash, he'll likely stay right here and demonstrate his increasing bitterness and worsening political small man syndrome, having accepted his lot in life as a very small fish in a very stagnant, small pond.

how much did ronnie pay you for this stupid blog?

BO, if u ever had any crediability u have certainly lost it over the last few days with your silly bashing of the da and boy mayor. if angle or dent turn quickly u will get your nose broken. crawl back into your hole - u are the laughing stock of northampton county

Now that is a more accurate depiction of the Northampton County Bullshiter, err, I mean Bulldog. He is all bark. A little man that thinks his bark scares people.

It's no surprise to me that anonymous cowards who engage in personal attacks would prosecutorial misconduct. Instead opf being a prosecutor, Morganelli sounded more like a vigilante, hoping that plays well with newspaper readers. While I agreee this grnadstanding is unliekly to affect the ultimate outcome in this matter, there is also no doubt in my mind that prosecutoral and judicial resources will now have to be wasted to dispose of the motions that Morganelli's remarks will cause. If it were up to me, he'd be assessed a few thousand dollars to cover the cost. That might inspire him to act more responsibly.

until DA's are appointed and elected, we should expect this kind of grandstanding.