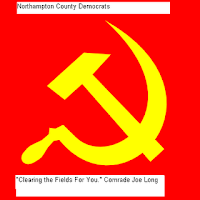 This is the kind of stuff that only happens here in the People's Republic of Northampton County.

By two votes, Walt Garvin was elected Northampton County's Democratic party chair on June 17. His opponent, Michael Laws, had three proxies from other committeemen, but those votes were never cast. State by-laws provide that only other Democrats from that district can cast a proxy.
Although it certainly appeared to me that an effort was made to be fair, the state committee has still refused to certify Garvin. Like his predecessor Joe Long, Garvin's election was illegal because secret ballots were used. State bosses prohibit that because they're afraid we'll just do what we do in other elections, and vote several times.

So this election will be repeated on Wednesday, July 7, 7:30 PM, at the Northampton County Courthouse, Courtroom #1. Here's how Michael Laws explains it.

"But we discovered something late that night and then verified it on June 18th that was a another technicality . We discovered a directive specifically directed to county reorganization meetings, that simply stated, that the secret ballot process was unacceptable on all levels in the Democratic Party according to a memo from TJ Rooney dated April 29. So Anne (State Committee member) and Larry Lauritzen contacted State Committee and proactively brought it to the attention of Walt Garvin and Fadia Halma at the State Committee on Sat 19th. When Fadia bought it to Joe Long's attention and it was further backed up by the State Committee’s Parliamentarian, Joe decided to re launch a new reorganization meeting. I did all that to say this. There will be a new election next week on Wed at 6:30 at the court house. Please come and vote again. There is a rumor that they even sent out the proxies, so we have a new opportunity to win this election and continue to focus on the goal of reelecting, rebuilding and making Northampton County Democratic Party the premier Party in the State.

"This is our passport to the future."

A letter from the local party confirms that there will be a do over on July 7. The letter does include a proxy.

Joe Long and Walt Garvin sycophant Charles "don't call be Charlie" Dertinger presided over the last election. I've been told that state Rep. Bob Freeman, a person acceptable both to Laws and Garvin, will have the honors on July 7.
Posted by Bernie O'Hare at 7/01/2010 12:00:00 AM

Like you, somebody wrote my name in and I am now a D committeeman in Lehigh county (at least that's what the letter I got in the mail said). I couldn't attend the reorganization meeting b/c of a work conflict so I had to take my absentee ballot to get notarized (45 min wait at the Yurkonic agency) and drop it off. I guess that isn't a secret ballot, but I was under the impression that the county party would be using secret ballots otherwise.

Secret ballots are the only way to ensure a fair election so I don't understand the prohibition.

Arise, wretched of the earth
Arise, convicts of hunger
Reason thunders in its crater
This is the eruption of the end
Of the past let us wipe the slate clean
Enslaved masses, arise, arise
The world is about to change its foundation
We are nothing, let us be all
|: This is the final struggle
Let us group together, and tomorrow
The Internationale
Will be the human race :|

I'm confused , I just saw Walt at an EADC meeting and they introduced him as the Chair..If this election is in dispute,why is he acting like he's Chair?

Yeah, I heard about that. He was introduced as the chair, but he's not.

Like you, I am confused about the prohibition on secret ballots.

Did some of Walt's support come from committeepersons who thought they were voting for this guy?

Clem Stoofa/Angle operative. You are doing a good job, really!