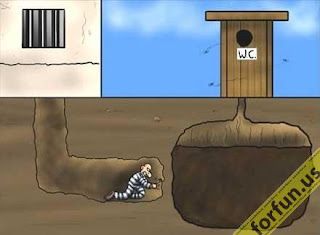 Last week, a 5'2", 160-pound, female resident at Chez Northampton was somehow able to escape police custody when taken to a magistrate's office in Wilson Borough for arraignment on felony theft. Despite her fashionable blue prison wear and shackles, she still managed to slip right out the back door. So it's a hell of a lot easier to escape than I thought.

Maybe she wanted to try the table games.
As easy as it may be to get out, it's a lot harder to get in. When I tried breaking in last week, I was caught red-handed. Let me tell you what happened.

One of my best friends, a fellow title searcher, is spending the dog days of Summer in the slammer. He's seventy-five years old, gets dizzy spells, has a bad heart and is cooking away over there with no air conditioning. It's probably my fault. I spoke up for him at his sentencing. Instead of probation, he's doing six months in the hoosegow.

He's allowed 8 visitors, and I'm one of them. So I called over there to make arrangements to see him.

"You're not approved," I was told.

I was given someone's name to call the next day, between 9 AM and noon only, so I did. "She's not here today," I was told.

And so on. This bureaucratic bullshit for about two weeks until I finally said enough is enough.

Time to break in.

Here's our break-in plan. I have a lawyer friend, and we both went over there. The jail has to allow inmates to see their lawyers, right? Sixth Amendment and all that. I was playing the role of paralegal and even had a legal pad.

We walked over to the pokey, and the guard (a very nice fellow, by the way) asked the lawyer for his ID. No problem. He produced his bar card and even had a driver's license.

"Who's your friend? the guard asked.

"He's my paralegal," the lawyer deadpanned.

I tried to look intelligent.

"Sign in," the guard ordered, and the heavy metal gates screeched wide open. We were in. I made sure to scribble my name so nobody could possibly know who I was.

We were then asked to take seats in an adjoining room while the guard called for this or that person. All of them were loaded with what was either tobacco juice or skidmarks. No Brazilian wood here, baby. Unable to find an unstained chair on which to plop our asses, we remained standing. The attorney read the sports section of a three-day old Express Times while I pretended to be taking notes.

After about ten minutes, another guard came down to see us. But he was plainclothes. We were being denied access after all. You see, the inmate's attorney of record must sign off on all visits by other lawyers. Job security.

After explaining everything, this jailer turned to me.

"Mr. O'Hare, under no circumstances are you coming in. And don't bother checking with the Warden because I already did."

Holy shit! How the hell did they know I was staging a break-in?

So our break-in failed.

On a bright note, I've finally been approved as a visitor. But it's for Friday nights at 7 PM. What the hell do they think I am, his girlfriend?

Email ThisBlogThis!Share to TwitterShare to FacebookShare to Pinterest
Labels: jails

Don't even think about it. I used to work there and some other related offices of the county. I am a ringer. It won't work. Good luck in your quest...

You never were good about obeying the law Ohare. Even your friends are criminals.

Why weren't you allowed in? Why?
Were you earlier caught smuggling in a copy of the Excess Times.

Without revealing too much, what did you 75-year-old friend do that landed him in jail?

Bernie
When you have three entries in a row
does that mean all were written today?

Am I supposed to stop being someone's friend bc he ends up in the slammer? What kind of friend is that? That sounds more like the actions of someone who has no real friends at all.

There is no way I can answer you do that without making it possible for others to ID him. I'd rather not do that. I have no quarrel with the fairness of the sentence imposed on him.

Somebody posted a link that identifies my friend. Since he is a private citizen and has no interest in politics, I have deleted that link. I'll allow it to remain if the person who wants to post it is willing to identify himself.

So the point of this post is that you were unable to lie your way past the gaurds at the prison....good for them? Also, did your lawyer friend misrepresent that he was counsel for the inmate when that's not true? At its least that's shady, at its worst that unethical. Although I should reserve judgment not knowing what representations were actually made.

I have deleted two more references to my friend. Those who wish to identify him must be willing to identify themselves.

Like I said, if you want to blast a 75 year-old man who's already in jail, you're going to have to identify yourself. You are apparently too much of a coward to do that.

ConcernedInNorCo said...
This comment has been removed by a blog administrator.
July 19, 2010 at 5:57 PM