Did Callahan Just Throw Cunningham Under the Bus? 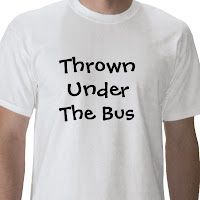 They've been called, both disparagingly and with admiration, the young Turks. Bethlehem's former and current Mayor, Don Cunningham and John Callahan, are political allies and friends.

Morning Call columnist Bill White ranks Cunningham #1 among the last three mayors for each of the LV's cities. "He has demonstrated himself to be a prudent manager of public money, a very good ceremonial mayor and a tough adversary when confronted with opposition. He's a forward thinker who knows how to sell what he wants. Most significantly, he began the process of bringing Bethlehem back from the hole it faced with Bethlehem Steel's collapse."
But in a June 17 fundraising letter, Callahan is now telling everyone that Bethlehem was a mess when he took over. “When I became mayor our city was faced with a lot of challenges. Bethlehem Steel had shut down, leaving a huge hole in our economy and our tax base. Jobs were lost, crime and debt were up and our spirit was bent (but not broken).”

Cunningham’s biography, on the Lehigh County Website, tells us this about his stewardship as Bethlehem City Mayor between 1998 and 2003:

“Don is best known as the former mayor of Bethlehem, Pennsylvania, where he led the economic renaissance of Bethlehem from a city that lost nearly 25 percent of its tax base with the closing of Bethlehem Steel Corp. to the city today with two flourishing downtown retail districts and $2 billion in new investment.”

He's claiming now that debt was up when he took over as Bethlehem's Mayor, but in 2005, Callahan himself told the Morning Call that Cunningham had reduced Bethlehem's debt by $67 million, from $339 million to $272 million. (1)

“John Callahan will say anything to get elected, and now he’s even contradicting himself at the expense of his political ally to beef up his resume,” said Shawn Millan, campaign manager, Charlie Dent for Congress.

Bernie, be careful, you're beginning to look like the old time media who's job it was to create controversy rather than reporting the news as it is. Don't start adding things between the lines...

Since when did this blog become a "newspaper"? Its a political blog showcasing the thoughts and ramblings of its author. I, for one, find his ramblings usually on target. However, I do not read this blog as a source of so called journalistic news reporting.

Both these guys use people then throw them under the buss when it suits their purposes. Thats always been the rap on both these guys.

You can say anything you want about either of these gentlemen. And I could throw Panto into the mix as well. They all have improved their cities with sound fiscal policies that have saved tax dollars. They all have brought great developments to their cities (county) and they all are personable and approachable. Like the other two, Callahan has learned how to make government work for the PEOPLE -- say what you want - he is just what we need in Washington! Nothing else matters. Ther are problems in all urban areas. Fortunately for us in Bethlehem and in Easton, we are better off than most cities because of strong local leadership.

Anon 8:27: I'd like one specific "throwing uinder the bus" incident involving Cunningham. A blanketed statement like that is just an attempt at smearing unless backed up by facts.