A Few Words About Charlie Roberts 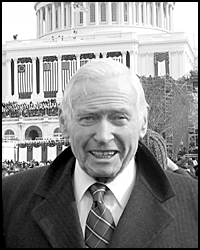 I've known Charlie Roberts since I was a kid. He lived across the street from our brood in Hellertown's Mountainview. My Dad was a diehard Democrat, and Charlie was just as devoted to the GOP banner. They were both heavily involved in local politics. You might think this would make them mortal enemies. But they had alcohol in common, so naturally, they became fast friends.

Back in those days, his little daughter Kathy and my sister Ellen looked alike - both dizzy blondes, and around the same age. According to one story, a pickled Charlie once drove my sister home from school before realizing he had the wrong daughter. In another version of this story, my Dad is the villian.

I may have known Charlie Roberts, but never really got to know him until I protested Northampton County's $111 million megabond in 2000. By that time, he was living the healthy life. He even quit smoking.

Despite our deep ideological differences, he always encouraged me to fight for my beliefs, and he was always a happy warrior for his own beliefs. He had come to believe in transparent and accountable government, even if it meant supporting a Democrat like John Stoffa. No silk stocking Republican, he was most comfortable with guys like Angle. He was one of the first to speak publicly against the mudslinging tactics being used by Scissorhands Severson.

His obituary lists some of his achievements: Lehigh grad, B-29 pilot, State department, Toll Bridge Commission and GOP party chair. But I'm sure Charlie himself would agree that his two masterpieces are his daughters, Kathy and Nancy. Kathy has an encyclopedic knowledge of local politics, more detailed than any person I know. Her sister Nancy is a mom and has a career of her own, but is enough like her old man that she was one of my co-plaintiffs in the bond litigation.

Last Winter, daughters Kathy and Nancy invited me to Charlie's home for a good dinner. Decorating the walls of his home were all kinds of pictures of Charlie with prominent national and state leaders. Nobody looking for votes came to Northampton County without seeing Charlie Roberts.
Photo: Legacy.com
Posted by Bernie O'Hare at 7/14/2010 12:01:00 AM

He has enriched our community and our lives. He was a good man who lived his life by his principles.He will be remembered with great fondness.

Charlie was an American hero.

Warm words for a warm man. Thank you. And may Charlie rest in peace.

Charlie was a real class act. He taught me a lot.

The obituary left out that he was the Republican nominee for Congress against Fred Rooney in 1970. He ran as a sacrificial lamb, and was proud to do so to help the Republican ticket.

Thank you for this Bernie. You are a good man, too.

Charlie could easily be called the greatest Republican in the history
of the Democratic bastion, Northampton County. He stood for
principle, integrity and good government. Despite the overwheming odds, he was there for the GOP year after year. He will
be sorely missed and is there anyone left to pick-up his mantle?

With so many accolades, there isn't much that hasn't been said, so I will add my voice to the others; Charlie was a real gentleman, a class act who stood by his principles no matter what.

Charlie's legacy is a GOP that stood for something and remained competitive in an increasingly blue area. The last time I checked, NorCo Rs controlled council and our congressman is an R who's expected to be re-elected again. All in all, not bad at all. RIP, good and faithful servant.

I believe that the Rooney and Roberts families were close, and Charlie's choice to run against Rooney was met with opposition from Charlie's brother and parents. Rooney always entertained Charlie in Washington. There was mutual respect. Of course, Charlie was the kind of guy that everyone liked.