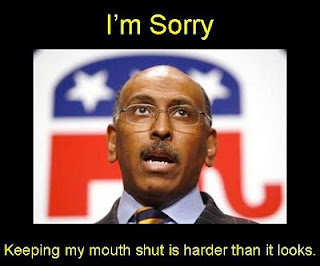 What national leaders are unwilling to say publicly is that, if we leave, we make it that much easier for the Taliban and Al Qaeda to destabilize Pakistan and grab the nukes there. Then we'll have problems that will make 9/11 seem like a church picnic.

RNC Chair Michael Steele, unable to open his mouth without inserting a foot in it, has chosen to politicize this admittedly unpopular conflict, calling it "a war of Obama's choosing". He adds, "[T]he one thing you don't do is engage in a land war in Afghanistan."
LV Congrssman Charlie Dent has just issued a statement siding with President Obama over his own party chair.

“First, the United States was attacked by Al Qaeda on September 11, 2001, with aid and sanctuary provided by the Afghan Taliban, the governing coalition of Afghanistan at the time. These facts are irrefutable and led to America's military involvement in Afghanistan. Any suggestion that America's role in the region was motivated by some other purpose must be corrected immediately.

"Second, this war is America's war, not President Obama's war. To suggest otherwise is simply unfair and incorrect.

"American and allied troops are engaged in an ongoing struggle to ensure that radical, Islamist extremists may never launch future attacks on our homeland or find aid, comfort and sanctuary in Afghanistan.

"During this critical transition of military command, it is essential and imperative that Congress demonstrate resolve and show solidarity with the troops, their new Commander, General David Petraeus, and their mission.”
Posted by Bernie O'Hare at 7/06/2010 10:11:00 AM

It is America's war.

Obama is the Commander-In-Chief of America.

Thus, it is Obama's war.

Obama campaigned for this job, let us remember --- long and hard, too.

Without even bothering to finish his freshman term as a US Senator, as well.

(it would be no different is the same as it would be if a Rethughlican, Repukelican, what have you, was in the White House --- just alot less Kool-Aid)

Steele is right. Too bad, he does not have the nerve to hold his ground. We can put a million troops in Afghanistan, suffer 50,000 dead, and what will we have at the end:
a corrupt and unstable government,
no Osama, greater fears of nuclear annihilation, and more time than the British and Soviet occupation. Much less to show for it. I don't buy the argument that we have to be there to save the Pakistani nukes. If they were that vulnerable, they would have been taken years ago. In fact, maybe they have been taken already.
It is Obama's war. When we voted for Obama and his rhetoric, we thought the troops would be home by now. He only expanded and prolonged the engagement.

I'm just glad our Commander-In-Chief is so experienced.

It's so refreshing, sniff...

Yes, with a Nobel Peace Prize winner leading and with the US military now handing out medals for "Courageous Restraint"...

...America is finally a place Michelle Obama can be proud of.

When is the next date night at US taxpayer expense?

I hope the Obamas get to do something fun...

Does anyone even remember George Bush anymore? Remember him? Two wars, a rececssion, and record deficit? Practically destroyed the country?

You will end up like the old composer in the Mozart movie in the insane asylum.

if you are really concerned about someone sneaking a nuke in this country, you better start worrying about the US/Mexico border where a million illegals cross without interference annually. That's the job of Homeland Security. You tell em Charlie, since you sit on that congressional committee.

Speaking of record deficits, I believe Obama has spent FOUR TIMES as much as Bush.

Bush had eight years. Obama set a new record in one.

Are you really THAT unaware of the facts?

I'd love to hear your Kool-Aid inspired SPIN on the housing crisis, you know, lending money to people who had absolutely NO HOPE of repaying...

Are you really that STUPID to bring up deficit spending?

I heard Obama pushing for a NEW Porkulus at the G-20 Summit...

November is coming. You might want to take another toke on the crack pipe!

Obama said the border was secure.

Geeting's head is going to explode; Dent agreeing with Obama

That's part of my evil plan, but he's on vacation.

I'm sure Geeting is working on his spin now, and that it'll involve fearing Callahan.

Hell of a plan! I'd repost this when he gets back so it isn't missed.

... and that's why Charlie Dent needs to go!

Mike Steele is the kind of asshole you get when your party's been knocked completely flat with no prospect of getting off the deck (e.g. GOP, November '08). Now, his party is poised to charge back into power despite his retarded leadership and almost Biden-like gaffe making. We'll soon be trying to figure out how Obama was ever elected.

Yes AND Immigration and Border is not Arizona’s cause it is AMERICAS CAUSE. SO GET BACK TO WORK and pass Immigration Reform NOW and stop Playing politics. There are a number of Republicans on Record supporting such a bill but will not touch it because it is an election year.

We have never invested more in border control than we are today. No matter how much money we throw at Arizona’s Governor it will not be enough. AZ Governor was complaining that more money was going to fight illegal crossings over in Mexico than was going to the State of AZ and Republicans echoed her chant. What ever happened to fighting the cause before it reached American soil?

when asked to comment on this situation callahan said "what's an Afghanistan?"

And 10:49 is worried about procedural posturing in Congress?

As a fellow commenter said on another site: Don't be distracted by idiots like Steele. Stay focused on November 2010, and then get Obama the hell out of office.

The advice Clem is giving is for Republicans to drag their feet on every issue so there is no progress in the Country and the recession drags on. If you make enough negative noise, Wall Street will react accordingly playing into the Republican Strategy of no progress is good for mid term elections.

AN OPEN LETTER OF RECONCILIATION & RESPONSIBILITY TO THE IRAQI PEOPLE

Peace be with you.

To all of those who were injured or lost loved ones during the July 2007 Baghdad shootings depicted in the "Collateral Murder" Wikileaks video:

We write to you, your family, and your community with awareness that our words and actions can never restore your losses.

We are both soldiers who occupied your neighborhood for 14 months. Ethan McCord pulled your daughter and son from the van, and when doing so, saw the faces of his own children back home. Josh Stieber was in the same company but was not there that day, though he contributed to the your pain, and the pain of your community on many other occasions.

There is no bringing back all that was lost. What we seek is to learn from our mistakes and do everything we can to tell others of our experiences and how the people of the United States need to realize we have done and are doing to you and the people of your country. We humbly ask you what we can do to begin to repair the damage we caused.

We have been speaking to whoever will listen, telling them that what was shown in the Wikileaks video only begins to depict the suffering we have created. From our own experiences, and the experiences of other veterans we have talked to, we know that the acts depicted in this video are everyday occurrences of this war: this is the nature of how U.S.-led wars are carried out in this region.

We acknowledge our part in the deaths and injuries of your loved ones as we tell Americans what we were trained to do and what we carried out in the name of "god and country". The soldier in the video said that your husband shouldn't have brought your children to battle, but we are acknowledging our responsibility for bringing the battle to your neighborhood, and to your family. We did unto you what we would not want done to us.

More and more Americans are taking responsibility for what was done in our name. Though we have acted with cold hearts far too many times, we have not forgotten our actions towards you. Our heavy hearts still hold hope that we can restore inside our country the acknowledgment of your humanity, that we were taught to deny.

Our government may ignore you, concerned more with its public image. It has also ignored many veterans who have returned physically injured or mentally troubled by what they saw and did in your country. But the time is long overdue that we say that the value of our nation's leaders no longer represent us. Our secretary of defense may say the U.S. won't lose its reputation over this, but we stand and say that our reputation's importance pales in comparison to our common humanity.

We have asked our fellow veterans and service-members, as well as civilians both in the United States and abroad, to sign in support of this letter, and to offer their names as a testimony to our common humanity, to distance ourselves from the destructive policies of our nation's leaders, and to extend our hands to you.

With such pain, friendship might be too much to ask. Please accept our apology, our sorrow, our care, and our dedication to change from the inside out. We are doing what we can to speak out against the wars and military policies responsible for what happened to you and your loved ones. Our hearts are open to hearing how we can take any steps to support you through the pain that we have caused.

If you describe what Congress has done to combat the recession over the last year and a half as "progress," then I will definitely take my chances with Republicans dragging their feet on everything. What the Congress has actually been doing hasnt been "progress", it has been "regress".

I think Afghanistan is Steele's War. Why not? Apparently we're just pulling things out of our $%#es now.

Thanks for explaining why we are in Afghanistan. I've been wondering. No one, Democrat or Republican, has ever given a reason that makes sense. Thanks!