Hanover Township Says "No Thanks" To County-Wide Gov't 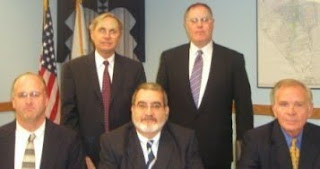 Berks County State Rep. Thomas Caltagirone wants a constitutional amendment to establish each of Pennsylvania’s 67 counties as the basic level of government. The state's 2,562 Townships, cities, and boroughs would be eliminated. Counties would take over everything, from filling pot holes to police protection.

But is bigger better? According to Pennsylvania State Association of Township Supervisors Executive Director David M. Sanko, the answer is No. "No one has ever proven that bigger government is better – or even more cost-effective – government."

On July 27, Hanover Township Supervisors unanimously approved a resolution opposing any forced local government mergers or consolidations, declaring that "townships are excellent fiscal stewards that have been doing more with less ever since the days of William Penn." It also notes that consolidated, county-based governments generally have higher tax burdens than smaller governments.

Township Manager John (Jay) Finningan derided Caltagirone's legislation as "Harrisburg's attempt to make government bigger. I'd hate to have anyone call Easton because their road is not plowed."

Later that evening, the Solicitor told Supervisors about a state legislative miscue concerning permit extensions, in which state legislators goofed and required every municipality to advertise in The Pennsylvania Bulletin. Supervisor Steve Salveson grimly noted, "This is brought to you by the same people who want all municipalities to merge."

The Resolution supports voluntary mergers started at the local level, provided it has the support of a majority of all affected municipalities.

None of the Lehigh Valley's state representatives have agreed to cosponsor Caltagrione's legislation, which appears to be dying a slow death in State Rep. Bob Freeman's Local Government Committee.
Posted by Bernie O'Hare at 7/28/2010 03:30:00 AM

Local government is a strong check and balance against the corruption and the consolidation of power that would occur if they did not exist.

Budget-cutting? Check out Lehigh County's government offices as an
example. Maybe you could find out how much it annually costs to run this opulent facility.

the state association of township supervisors are going to oppose anything that lowers their membership base and eliminates the conflict of interest laden supervisors/employee system. that said, this isn't the best idea but it does raise an interesting notion: why do we have 2500+ municipalities? we already have scale of gov't that seems to be more appropriate: school districts. why not merge into a school district based system? granted, teh state association of township supervisors would oppose that too, but it has nothing to do with bigger government. they just want more government and to protect their own jobs (and the jobs of their harrisburg lobbyists).

If a township doesn't provide police protection, it shouldn't exist. the only reason for it to exist is to protect somebody's precious territory and for patronage jobs.

Ha! Ha! I wonder if Ed Pawlowski gets his instant Building Permit under a county government. Maybe a county government would cite him and his contractor for construction work done without a Building Permit. BTW, has anyone figured out which contractor "donated" the Mancave perk to Pawlowski for "$500". I'm interested too, a $500 basement fit-out sounds like a great deal, or is it only for his royal majesty and the first lady?

There is a direct correlation between the overall level of taxation and health of older communities in states with regionalized local governments and states with fragmented ones.

It's ultimately not useful to ask the head of the State Association of Township Supervisors if getting rid of township governance is a good idea. It's like asking the oil industry if America should wean itself off fossil fuels. The fact is that the fractured system of local government prevents any kind of comprehensive planning at the regional level, and it's directly responsible for the cycle of unsustainable land use patterns. I think it's a real injustice that, for instance, rich people are allowed to self-segregate so that the tax base in Lower Macungie is unavailable to Center City Allentown even though they're part of the same regional economy. Those are the most important things that fractured government prevents - county-level tax bases, county-level land use planning, and county-level school districts. The individual townships are not going to vote away their own power. It has to happen in Harrisburg.

Anon 6:25, Never thought of it quite that way, but your point is excellent.

"If a township doesn't provide police protection, it shouldn't exist."

I'd agree with that. Unless it has a contract w/ the PSP, it is failing in its mission.

"BTW, has anyone figured out which contractor "donated" the Mancave perk to Pawlowski for "$500""

My Right-to-Know request must be answered by Thursday.

Jonathan, I think Pa government is too fragmented. But I know people who live in places like tiny Chapman, nt just some rich township, who want things that way. his consolidation, when it comes, has to be voluntary.

I'm not sure county government could handle it, to be honest. I'm thinking more in lines like Easton, West Eastom, Glendon and Wilson consolidating.

Don't stop at the government level, our school districts are crippling most seniors and many struggling young families.

Does Wilson or Salisbury need to be their own districts? You have to drive thru Allentown & Easton to get to them.

Bangor & Pen Argyl, same thing, administrators sucking the taxpayer dollar when it should be going into the classroom...

Way to change the subject from your scurrilous attacks. Hanover Twp? Who gives a fuck?

Bernie
Permission to post:
What was the final result of your mayor/bro-in-law investigation? What did you uncover? What did the mayor say about the story? It seems like
we never hear the end result of these
stories. You need a special blogger link titled: "In Case You Missed the First Chapter."

"BTW, has anyone figured out which contractor "donated" the Mancave perk to Pawlowski for "$500""

My Right-to-Know request must be answered by Thursday.

Anon 9:53, I have a story on the latest developments (ET's involvement), along with links to my previous posts.

Mr. Finningan maybe you should call Easton for you snow plowing. I live in Easton and our streets were plowed really well and I work on the otherside of your township and your roads were horrible. As a twsp mgr. you shouldn't be calling out other local municipalities. Many of you in the suburbs need to understand that it is the three cities that are the reason we are here and enriches our lives.

I'm sure there are people who want it that way in less populated areas. But my point is, they don't have the capacity to provide quality services because their tax bases are too small. Local government is pro-cyclical, so when the recession comes, tax revenues go down at exactly the moment they're most needed. Having a larger tax base doesn't fix the cyclical problem, but it gives you more of a cushion.

The problem with making it voluntary was described to me by school board members at the Building One PA event last week. In the case of school district consolidation, three districts in NE PA consolidated in order to access a bigger tax base, but the wealthy residents just moved out of the district.

I think the same would happen if, say, Lehigh County consolidated all its municipal governments. David Jaindl would just build a new sprawling development on farmland in NorCo offering lower taxes and people would move across the border. A voluntary piecemeal process just isn't going to work. You're going to keep getting the flight problem unless everybody does it at once.

That said, aside from coordinating education, tax bases, and land-use, I don't see any reason to actually disband the hyper-local structures, but I think they should have more of an advisory role that's more appropriate to the capacity they actually have.

If you look on the NorCo Assessment Division, the City of Easton has a millage rate of 24.95 vs. three twps with a millage rate of 2. If you also compare the highest and lowest "total mills", a house assessed at $90k would pay $8,124.57 in Walnutport vs $5,146.20 in Plainfield Twp. Same house, $3,000 dollar difference. Why shouldn't you have the right to choose what is worth to live in Plainfield vs Easton or Walnutport?

With regionalization, what would happen? Easton, and others would see a temporary decline in taxes, while the smaller communities would see an increase....but over time, ALL would see higher tax rates.

I DO support voluntary regionalism, such as COGs, etc, who can work collectively in areas of mutual concern in an efficient way.

Here are some fun facts about Mr. John (Jay) Finnigian:

2. Number of other people interviewed for the job? Zero.

3. Years of experience in similar job or even in government? Zero.

4. Number of months "training" under the previous manager at full salary while current township manager was still being paid full time? 8 1/2

5. It was John (Jay) Finnigian who decided Hanover Township should purchase a building to house the Colonial Regional Police department without consulting with Bath or Lower Nazareth.

6. It was John (Jay)Finnigian who "cut" taxes by having homeowners pay for trash removal separate from their tax bill. The result is that the $290 trash bill + tax bill that was marketed as a "tax cut" was an actual increase of 50-100% depending on your original tax bill. The older houses occupied mainly by senior citizens on fixed incomes saw a larger increase than guys like Finnigian who live in the bigger, newer homes.

7. JP Mascaro does a horrible job on the trash collection and snow removal can be, at best, called horrible and late.

8. It takes forever to get a permit.

9. It was John (Jay) Finnigian who led the charge against David Jandal's land development plan in the 1990s. As a result f Finnigian's actions,the township was forced to agree to worse terms on a land development deal or have a 360 acre turkey farm.

A former resident of Hanover Township.

I would rather have Pennsylvania be a State rather than a Commonwealth. That may clear up some of the issues presented.

Of course they do not want to have their little pocket of power taken away from them. Jay Finnigan would be giving up a $95k job w/ $20k in benefits and a pension. And Steve Salverson has made a career in the public sector because he couldn't make it in the real world if his life depended on it.

If they cared about the people and services they would, along w/ Freemansburg and Beth. Township, roll into the City of Bethlehem with seats on city council given to the three areas. But that makes sense so it will never happen.

Why is Bethlehem in two different counties?

Mr. Finnegan was anti-semite Ron Angles campaign manager in 2001. Angle made Stoffa Executive and he made Finnegan a twp. manager.

The dude has some power in the Republican Party.

Thank you Hanover Township!!! We have too much big government. If I have a problem in my community, I can easily reach out to a locally elected ward Commissioner. Every County form of Goverment has State Legislatoresque untouchable elected officials leaving one to deal with career government workers. Keep the Township's and Boro's!!!


My blοg: Resistance Of a Resistor