A Home Run Derby of Sorts 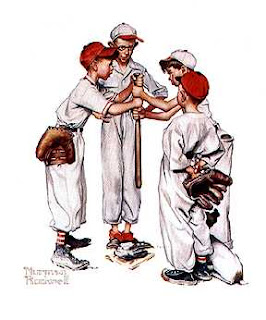 Last night, I finally made it to the Iron Pigs for their All-Star home run derby. It's my first trip this year. Ironically, I've missed most of their season because my 10 year-old grandson has kept me pretty busy going to his own baseball games. As exciting as it is to watch professional baseball, I'll take the magic of a kids' game any day of the week. A boy who has struggled all season can suddenly have a clutch hit. A slow runner could suddenly explode and steal home. A little catcher might just make that throw to second, shocking everyone, including himself. With runners poised on first and third, there could be a trick play. Some outfielder might make an impossible dive for the ball, and triumphantly pick up his glove, holding that ball. First and third basemen might run into fences and dugouts, going after, ad sometimes catching, foul balls. I've seen all of that this season, and more. But there's one thing more mystical than all of that.
Dugouts have become much more lively, with teams cheering on whoever is at the plate. Ten year-old boys have picked up a new type of fan they did not have last year. Ten year-old girls. One cute little girl cheered my grandson every time he was at the plate. "I just love Dat," she'd sigh, to no one in particular. I told him about this after one of his games. I was waiting for him to tell me he hated girls, but he instead asked me to point her out. As amazing as that is, there's something more mystical than that.

The bomb. Sending a text. The long ball. The bleacher burner. Going yard.

Especially when it matters. I've seen a few of those this season, too. But nothing like last Friday, when Lehigh Little League was playing Hellertown for the District 20 championship. These teams had both beaten and eliminated Northwest Bethlehem, where my grandson Dat plays. Naturally, I had to see this clash between Hellertown's Hellions and Bethlehem's Bombers. Besides, half of Lehigh's kids play with Dat on the Bethlehem Canes, a tournament team.

Things started poorly for Lehigh. They had home field advantage, but gave up five runs in the first inning. Now hurler David Bertolotti, who is only 9 years-old and actually gets stronger the longer he pitches, was throwing well. No reason to yank him. But the boys were making fielding errors and overthrows, something you can't do against Hellertown.

Instead of yelling at these boys in front of everyone, or picking a useless fight with the ump, manager Burcin kept his cool, not letting the kids get down on themselves. They are, after all, ten year-olds. In two more innings, thanks to consistent hitting from Kyle Picht and Jared Burcin, Lehigh had picked up eight runs and was suddenly ahead. But Hellertown, like Lehigh, was not prepared to go gently into that good nigh. They fought and clawed back with solid hitting and wicked change-ups. The lead went back and forth until the score was tied at twelve.

That's when Sam Kraihanzel came to the plate. Sammy is that rarest of creatures, a long ball hitter. What's more, he's a clutch long ball hitter. I've seen him hit a few in tournament play. But nothing like Friday night. He sent the very first pitch tossed at him into deep left field. It sailed over the fence marking the end of the field. It then continued to soar, nailing one or two sea gulls, until it collided about 12' high with another fence serving as a buffer with another field. But for that fence, Mr. Spalding would have screamed for at least 300'.

"I just love Sammy," sighed the very same girl who just a few weeks earlier was in love with Dat.

After his four bagger, Sammy came out of the dugout to warm up a pitcher. His smile was worth a million bucks.

Lehigh would go on to add four more runs before finally tiring out. But really, it was Sammy's long bomb that took the wind out of Hellertown's sails.

So when the clouds opened up and rain cascaded into Coca Cola Park last night, I did not mind the delay. Everyone huddled together, soaked, under hot dog and ice cream stands and even in rest rooms. People joked with each other. I would have liked to have seen Nazareth High's DJ King, who was invited to hit a few with the big dogs. But I left after about forty minutes.

So you scored some pay to play free tickets because of your political love posts. Nice job Bernie. Did you take your "grandson" with you? Does he know he is your "grandson"

You're a disgusting person.

great story. baseball is a kids game. I still remember the games from when I was a kid and can remember every pitch, whether it was a ball, a strike or if I put it in play. hitting my first homer was the stuff of legends. friends still joke about it, along with the time I tripped over second, tore my pants and forgot to wear my cup while catching.

I agree. it is a kids' game, often ruined by adults.

Did you use your pay to play tickets from this blog to see the All-Star game?

Unfortunately, the IP is a proxy server, but this is an AOL customer.

Christ Ohare the guy asked you a question and you go all J Edgar Hoover on him. maybe if you just answered his question without the histrionics you wouldn't have a problem. You do encourage discussion and you do invite people to "rip into you". Although the question was hardly a "rip". Cheez, lighten up.

I totally agree, youth sports are great for kids and always ruined by the adults. There should be no score kept in midgets, it should be about teamwork, learning skills, exercise and the positive things that sports gives an individual. But parents and coaches make it about winning and that's a shame. Ever wonder why there are thousands of kids out for midgets and hardly any for high school sports?

Anon 3:08, You're the disgusting piece of shit who posted that slimy remark about my grandson and then again. But you're too cowardly to identify yourself.