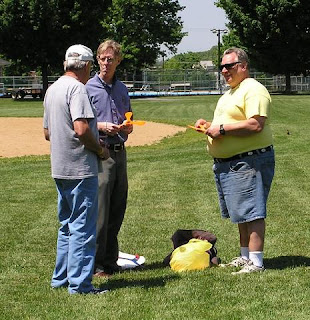 As newspaper reporters become more scarce, we can be thankful that citizen activists like Dennis Pearson pick up the slack, "sounding forth the trumpet that never sounded retreat." President of the East Allentown - Rittersville Neighborhood Association, he can be counted on for regular newsletters about developments in the Queen City's 14th & 15th wards. Here's the latest.

"Who took the flag off the flagpole at Irving Pole ... I trust no city employee took it down on orders of their superiors ... This is America. The flag ought to be flied on a municipal flag pole, especially on the weekend we celebrabrate our independence... I trust the flag wasn't removed by a neighbor offended that the American flag was flying."

"The neighborhood association provided the flag, and not the city .... It is actually a flag donated to us by a neighbor .. A flag that was on the casket of her deceased U.S. Military veteran husband."

(Since he was in a casket, I sure hope her husband was deceased.)

Personally, I suspect those Lehigh Valley Woodchuckers, a local gang that gets all hopped up on scrapple and then tosses boomerangs all over Irving Park.

"And why was the Irving street Swimming Pool closed for The July 4 weekend? ... Is there a problem with the pool? ... Or is it another sign of a bankrupt city trying to save money? .... We won't accept any close down like occurred many years at Roosevelt Park ...That time ... employees at Mack Pool got out of line ... And were let go ... But that pool did not close ... Roosevelt did --- The employees from there were transferred to Mack.

"Remember there are no other swimming pools in East Allentown, and Jordan is on 6th Street, not even in Dieruff High School attendance area."

Dennis tells me the pool opened late yesterday. He also reports being hassled last week at the U.S. border because he was a lone individual traveling with an east coast license plate. Wait 'till he tries to fly somewhere.
Posted by Bernie O'Hare at 7/06/2010 12:01:00 AM

Which US border? What's that about?

Obama took it down to make the illegal aliens he is about to grant amnesty to feel more welcome.

The Canadian -U.S. border between Manitoba and Minnesota --- Worrad to be exact ...Passed the Canadian Custom post and wanted to return to U.S. --- The Female Agents took my passport, car and possessions to be searched away from my sight .. They did not state any cause ... The only thing dangerous to some in the car was a Bible I carried with me ... The car and possessions were returned over an hour later ... Not to long after I started complaining about my welcome back to the States ... Senator Casey said under a Homeland Security decree of July 2008 they could have took sensitive property such as lap tops, cell phones, etc. to gather information ... But without cause that does not allow for due process to individual who has lost tangible and intellectual property due to seizure and that is unconstitutional..... DLP ...

Ah, anon 10:56. You should address your appreciation of those actions to the authors. Former President bush and The 'Dick' Cheney.

They have done more than any Administration to shred the Constitution and trample on American citizens rights. But you do feel safe, don't you...DON'T YOU!!!!

The Overlords, if such a thing ever took place, don't you think Obama would have reversed it all by now?