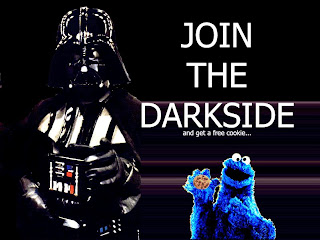 A few weeks ago, I caught all kinds of hell when I wrote about a Norco GOP picnic. In a moment of weakness, the Northampton County Bulldog had invited me, a duly elected Democratic committeeman, to watch Republicans eat pork. Naturally, I made fun of everyone. It's what I do.

What really got me in trouble was a comment about Ron Shegda, who is trying to set a record for most number of races run without actually winning anything. I wrote this: "Ron Shegda (running against Bob Freeman) spoke about gas while his sister kept filling plates with cookies and cupcakes and taking them out to their car. I'll bet they had one hell of a bake sale."
People were outraged. How dare I take such a "cheap shot against an obviously disabled woman. You're a real class act, OHare."

My response? "I try. Her brother is obviously disabled, too."

This little exchange was plastered on bulletin boards all over Courthouse. Perhaps that would chasten and embarrass me. Right?

Wrong! I'm here to tell you that the cookie monster has struck again.

Yesterday, Shegda's sister was at Charlie Roberts' viewing. There was one hell of a spread at the luncheon. I was gone by then, but Ron Angle tells me there were mountains of the most delicious-looking cookies he's ever seen. And there was Shegda's sister, scarfing them all up, loading them into her purse, pockets and napkins, then running out to the car. At one point, Angle told her the kitchen probably had aluminum foil, and she ran in for some of that, too.

Shegda actually had to pop open his trunk so they could load up all the goodies. And off they went.

We had plenty of food and invited Ron's sister to please take desserts home. Charlie had a terrific appetite for all things, especially food. He loved anyone who appreciated food as much as he did (particularly someone with a sweet tooth). I am sure he would not have wanted any food to go to waste.

I think it is more fitting to mention the young people at the service. They were all very well mannered and well spoken, capable of conversing with adults, they were dressed appropriately and all had hair colors you might find in nature, none had facial tatoos or piercings

It was a tribute to Charlie's effect on young people nad to the role models they have met amongst us.

Very reassuring about the future of our country.

Not so casual, sounds like a nazi bund meeting.

Bernie, your cruel comments about Ron Shegda's sister show you to be classless. You should be ashamed of yourself making fun of people with disabilities. May God have mercy on you for your viciousness.

Shegda has not worked for 3 years and is really a hypocrite. Look at bankruptcy filing in Federal court.