Wednesday night, I got a first hand view from the inside of a Northampton County Democratic committee reorganization meeting. An election engineered by former Bossman Joe Long in June was declared illegal by the state committee, and had to be repeated.

Instead of doing that, Longoons wasted nearly an hour trying to get rid of me, even though I am an elected committee member with a mandate of one (count it) write-in vote. They relied on state by-laws consistently ignored when it has suited their purposes. They even ignored a specific provision that grants me a hearing before the state committee.

I brought my trusty flipcam, and despite Long's efforts to silence me, was able to film some of the highlights. Now, you, too, can see what happens inside the dysfunctional world of the Longoons. 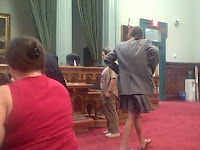 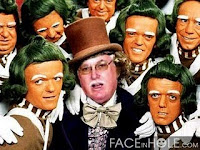 * Joe Long tells the Committee to dump me because I support Charlie Dent for Congress. (Video here). Gee, so do a number of other Dem Committee persons. In fact, Joe Long regularly supported Arlen Specter when Specter was still a Republican. 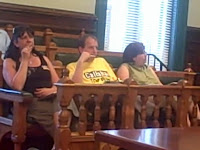 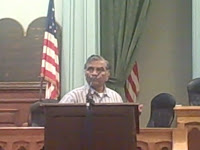 * Sudantha Vidanage, a committee person who apparently is on loan from the Taliban, claims I'm a spy. (Video here). He later asks me to swear my loyalty on the Qur'an, and picks up a few stones. 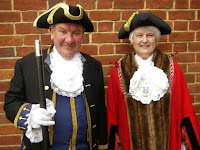 * Tipstaffs drag me from Courtroom One and begin burying me up to my shoulders for the public stoning, until I tell them that Court Administrator Jim Onembo needs his ass wiped. They drop me like a hot potato and dive through a just-replaced window to escape a fate worse than death. 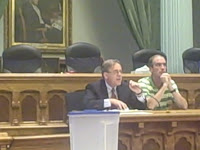 * Bob Freeman and Joe Brennan, running the show, decide to let me vote despite my general unpopularity among the Longoons. Says Freeman, "I think there's probably no one in this room who hasn't supported, from time to time, someone of the opposite party. ... I think we go down a dangerous path when we start to cherry pick who we want to accuse of not being loyal to the party." (Video here.) 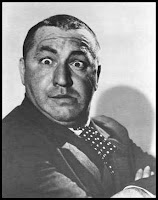 * Curly Fleck: "We're going to be beating the hell out of the Republicans. Rrrowf! Rrrowf! Yes, I lost that Easton Mayoral race. I’m a victim of soicumstance!" (Video here). Former Congressional candidate Sam Bennett bursts into the room to do her own Curly impression.

* In case anybody missed him the first time, Bethlehem Committeeman Rolf Treisner gets up and does a little jig in his utilikilt (Video here). "Are you going to put that on your blog?" someone asks. Hey, far be it from me to make fun of another person.

* While votes are being counted, Bethlehem Committeeman Sudantha Vidanage demonstrates a Taliban missile, explaining why we need to pull out of Afghanistan.

The camera does not lie. But I do. 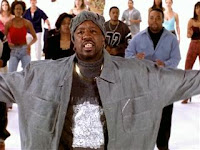 You're going to Hell.

Why do you only attack the Committeemen you don't like? Interesting how this committee is so evil yet some of your pals are in leadership positions, very interesting???

Vidanage is a Sri Lankan surname. Sri Lanka is in South Asia and has nothing to do with the Taliban. You are conflating brown people you don't like in order to summarily dismiss Sudantha because of his race. That is an ignorant and racist statement.

It's called humor. Even people from Brooklyn know that.

You get called out and now you look for every opportunity to bring everyone down to your level.

Jonathan, This is called humor. The statements concerning stoning or the Taliban missle are so idiotic they can only be taken as humor. Same thing with the utilikilt or the cha cha slide. Zealots, whether they are on the right or the ledt, tend to lack humor. Pity. Hope you lighten up some day.

Incidentally, I have a "brown" grandson. I don't really think of him that way, and wonder about people who do.

i think the taliban comments are a little over he top.

The video of the person in the kilt.
Is that a man or a woman?

Sorry for that double click. Please, would you mind deleting the second.

I had some confusion myslef. But it's Rolf Treisner, and he is a male.

Why not just call the guy a "towel head" or "camel jockey." Humor, right?

Not the first time racist or sexist remarks didn't emanate from this blog.

Leave the racist jokes for the experts...

Again, don't do this yourself! Only highly skilled politicians on the proper side of the aisle can get away with this. Not the sort of stuff for amateurs... please be more careful!!!!

I know it is old news but what were you rimpression of the LeBron James spectacle last week? It was a very smart marketing ploy by ESPN but the show itself was a sham. What bothered me the most was that it took place at a Boys & Girls Club with the proceeds supposedly going to that very worthwhile organization. But it was a disgrace to have those kids serve as wallpaper while LeBron stroked his ego for an hour. No one even gave some props to the B&G Club. They could have asked the King why he supported the organization, how it helped him as a young boy growing up in Akron, etc. But the kids just sat there with bewhildered looks on their faces as inane question after question was raised with King James. What a missed oppotunity to do some real good to promote a great program that help kids in need.

My comment was also intended to be so outlandish and ridiculous as to make it humorous and to point out that ALL of us, more or less, are assholes. It goes along with other comments about the Cha Cha slide, a Taliban missile, being stoned, Jum Onembo, Curly Fleck, utilikilts, etc.

I pretty much offended everyone, as I do on a near daily basis.

Anon 10:09 just has an axe to grind, but is too pussilanimous to identify himself.

It is very unfair to compare Michael Fleck to Curly, one of the three stooges.

If he were alive, Curly would be very upset.

Not that you care about accuracy, but that's not Schall in your picture. No wonder you never get answers you don't even know who the people are.

See you in hell Bernie. great post; good fun. Does the skirt guy shave his legs?

" but that's not Schall in your picture."

Then several Dem committe people are incorrect. What's this world coming to when I can't rely on the Dem committee?

That was the real motive here. See ya' there.

You can see my name next to what I write. Once you identify yourself, and not with some sock puppet but your real identity, I will allow your personal attacks against Stoffa and Angle. But you won't do that because you are a coward.

Like I said, you need to identify yourself, and until you di, all your infantile comments will e deleted.

The man pictured with the caption where it says Sudantha Vidanage isn't even him!!!! Get your facts and your pictures correct!! Mr. Getting is correct in saying that Vidanage is a Sri Lankan surname. If you look on the map, you'll see that Sri Lankan is SOUTH of India...no where close to where the Taliban is...an no connections! Those in Sri Lanka have been more concerned about the 20+ year civil war that devastated their country than the Taliban, etc.
Just because someone is BROWN doesn't mean they are a terrorist. Hitler was white and 1,000X a worse terrorist than Osama Bin Laden.

Puhlease, learn to laugh. That dude identified himself, and the name that sounds closest to it is what I put down.

obviously you need a hearing aid because that man tagged as "Sudantha Vidanage" is Anath not Sudantha...guess hearing goes with age old man....as well as looks...