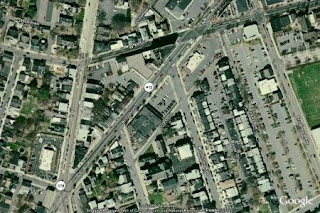 When introduced in May, Bethlehem Planning Bureau Director Darlene Heller claimed that at long last, the City would have an innovative and "user friendly" zoning ordinance. Friendly or not, the draft ordinance has undergone a barrage of criticism. On July 8, Heller presented the Planning Commission with a detailed, three-page, summary of complaints received at three recent public input meetings. A meeting with only two items on the agenda lasted two hours as residents continued to voice concerns.
Dennis Connell, a Bethlehem architect (for real), told planners he stands to lose several hundred thousand dollars at several properties he owns on North New Street, between North and Garrison Streets. Currently located in a Central Business District (CB), the new Zoning Ordinance will change this to a more restrictive Limited Commercial District (CL).

According to Connell, that will have a "heavy impact on the investment I've made in the downtown area." He explained that the value of his property will drop from $40 to $25 per square foot. "It's time to stand up and put my voice in the mix," he concluded.

Bethlehem resident Robert Pfenning questioned the real motivation for rezoning the southeast corner of Linden Street and Butztown Road from RS to the less restrictive RG, where some commercial uses are permitted as a special exception. "What's driving this?" he asked, pointing out the only property in that new district that is not fully developed is 2854 Linden St, which has been owned by Dino P. Cantelmi for the past nine years.

"It smacks of spot zoning to me," Pfenning suggested. Cantelmi is Mayor Callahan's brother-in-law.

Twice, in 2000 and 2009, Cantelmi tried, and failed, to obtain a use variance for a funeral home in this residential area. His latest proposal is Cantelmi Condominiums, which would entail demolishing Jiralanio's home and replacing it with 21 townhouses, complete with individual driveways and 51 parking spaces.

If rezoned, Cantelmi will be able to apply for a funeral home as a special exception.

Unswayed by the suggestion of favoritism, Heller had told planners earlier that "we're proposing that [a funeral home] continue to be a special exception in the RG district."

Feisty Sue Fang, currently embroiled in litigation with the ZHB over their decision to allow an expansion at Elias Farmers Market, told planners there are "too many loopholes" for nonconforming uses in zoning. But Planning Chair Lawrence Krauter gently suggested that the whole idea of the new zoning ordinance is to reduce those loopholes.

Heller told Krauter that "where appropriate, we will make changes." She also stated she'd like to cut off public comment at the end of July. Krauter suggested that when the ordinance is revised for those changes, he'd like to see another period of public comment.

Having attended the public input meetings himself, Krauter reported that "the flavor is that we don't want more commercial intrusion into residential areas." But he also agreed with Heller's assertion that "property should be zoned in keeping with the uses that are there."

Before it goes to City Council for review, the Zoning Ordinance must first be endorsed by the Planning Commission. But the timing is open. "We really have no schedule," explained Heller.
Posted by Bernie O'Hare at 7/09/2010 01:10:00 AM

Darlene Heller has been very gracious at these public meetings despite repeated attacks. A zoning code change is always volatile and the planners get knocked around no matter what they do.

I'll agree that Ms. Heller has been verry professional. To the extend that she sounds like a dictator, that is likely more due to my shortcomings as a writer tahn her ability as Director of the Planning Bureau.

But I'll also add that the perceived "attacks" are really the very thing she is seeking - public input.

It does not hurt him as an architect, it hurts him as a landowner. Any zoning ordinance change hurts some land owner.