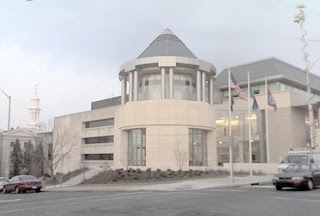 While I understand Northampton and Lehigh County are both bleeding money, is a 5% pay cut the answer? For those who are making $50,000 plus, it might mean some minor belt-tightening. But what about those making between $8 and $13 per hour? Some of them are working second jobs, if they can find them. One of them commented here this weekend. No ideological rant. Just nuts and bolts observations, which I'll share it with you.
"Clerical employees earn $8.00 to $13.00 an hour. I would rather have Mr. Angle and Mr. Stoffa layoff personnel in the Sheriff's Department. They have way too many employees. Also, they have too many people for security at all the entrances. When you figure the cost for wages and benefits, its enormous. When the County constructed a new courtroom for Judge McFadden the tab was over $800,000.00. Now that courtroom houses the cafeteria, a total rehab at a cost of $200,000-$300,000.00. Soup and salad please. Why should the County reduce salaries on the backs of people who earn very little to begin with, when they have lavishly and foolishly spent tax dollars. The public should see the bills for the courthouse expansion, especially for the Brazilian wood and the lunch table for the judges. I find it appalling to reduce the salaries of hard working people, when the court, current and past administrations have squandered money over the years. Another example of waste is the current domestic relations building on Union Street, cost about 5 million to build, there's a total of 58 parking spaces, but there's 53 employees for the department. I think the County should rethink how they continue to waste taxpayer dollars and not take it out on the employees, after all we didn't beg you to spend 45 million on the courthouse expansion."
Posted by Bernie O'Hare at 7/19/2010 12:01:00 AM

Wow, that is a shock Bernie. You highlight the one opinion that slams the courthouse building. That was the very project you have screamed about and cost the County thousands of wasted lawyer dollars to finally get a judge to toss your silly suit out.

Problem is nostalgia is sweet but doesn't begin to solve the problems of today. Into his second term Mr. Stoffa was start owning his actions and mistakes.

Much of what this employee says makes sense (bigger cuts can be implemented at the top, wasteful positions eliminated to lessen the amount needed from cuts at the bottom). The problem is that we can't unspend the money that has been wasted to this point and beyond.

In good times - check that - in non-meltdown times, no one pays attention. Lavish building projects are undertaken and put on the credit card, positions are created, contracts are agreed to and pension-increasing raises are handed out in the spirit of "civil negotiations, compromise and good government". Those of us who dared discuss the potential pitfalls of that type of "good government" were labeled alarmist and wing-nuts.

So now, reactionary government must react where it can.

Pick your euphemism: Grasshopper and the Ants, chickens coming home to roost, time to pay the piper. Each fits.

Several months ago Bernie had a post on the looming pension obligation, and yet I don't think we've seen any real effort to deal with that. Locking new people out doesn't get it done, btw.

How did Dent vote on cutting off everyone's unemployment benefits? Did he vote with the Republicans?

Anon 8:43, You are OT, but Dent voted to extend unemployment benefits.

Anon 2:17 = 3 AM troll = cheerleader for everything that went wrong under Reibman.

Yes, I sued over the expansion, and signed my name to the suit, too. And guess what? I won. The County had to do the bond over. And the delay caused by my litigation resulted in lower interest rates that have probably saved the County $20 MM.

I love this whole debate..It is occuring because the county is afraid to tax taxpayers about $1. a week to pay for services..These are the same taxpayers blowing hundreds or thousands at the sands and crying that they can't afford a dollar a week increase..Give me a break..Instead people like Angle are talking about cutting wages..This is after they gave away table game money to easton at the tune of 450,00 a year and millions of slot money to Lehigh County and Allentown that should have never went there. This has all happened over 2 administrations but Council last year could've considered a small tax increase to avoid this mess ( which Stoffa would have supported) but they chose not to..So tell me why the employees should take a pay cut after all this...I have an idea..Why not just abloish county government and then no one would be taxed, right?

If the county makes cuts at the top IE administrators, they will save the same if not more than cutting 3 "bottom level" employees.

let me tell you how the county works..I went into Domestic relations with a client..Went past three sheriffs chitchatting with each other, obviously not overworked. Then we went into Domestic relations and were told that we would have to sit for an hour and a half or come back the next day because they were short staffed. There in a nutshell is the issue.. In some areas they are understaffed and others , overstaffed..Fix it already and stop the across the board pay cut crap and the talk about cutting all divisions equally. That is a pathetically easy and cowardly way to cut..All divisions are not equal. Not even close. human Services are funded almost entirely with State and Federal money..If you lay off those workers or cut their pays you save the county little but make the State and feds happy..They'll just take that money and put it in their legislative slush fund or give it to lehigh County..

2:15 is a perfect example of the contempt in which taxpayers are held by many publicly paid sloths. The assumption is that taxpayers work to support gold bricks like this. Welcome back to planet Earth, you lazy coveting underachiever. The gravy train is over. Read carefully: there's no more money.

3 deputies at DRS? There was a day recently where there was only 1 deputy in the building. What happens if a defendant is taken into custody? Is the deputy at the front door supposed to leave his post to search and cuff him waiting for someone from NCP to arrive?

What happens when there is a scuffle in a conference room with a crazed def rampaging about? Alarm buttons are pushed... who comes running when there is only one person watching the front door? Is he supposed to lock up and tell everyone to remain seated while he runs downstairs?

To be safe you NEED at least 3 people at all times.

What happens if a gunman starts shooting through the doors at the main courthouse and the building is understaffed? Are they supposed to leave the judges behind?

What happens when there is a medical emergency?

You may think they are overstaffed but wait until someone passes out in a courtroom or a fight breaks out. Without the added personnel the courthouse would be a very dangerous/unsecure place.

These guys a crack shots and pass tests every 6 months to make sure they are qualified. I wouldn't want to be on the business end of their weapons.