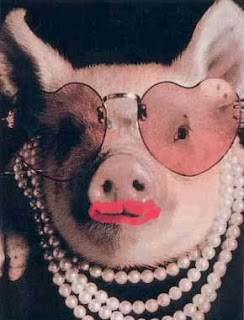 On Saturday, I was Ron Angle's guest at a Northampton County GOP picnic. He told me he'd pick me up. At noon, some Blackwater dudes broke into my apartment, threw a black bag over my head, and off we went. Though unable to see, I could still smell pretty well, so I was pretty sure we were in farm country. After about ten minutes, they threw me out of the flatbed, and sure enough, I was in Bushkill Township, where there still are a few of these exotic animals called cows. Yes, this is Angle country.

What goes on at a Republican picnic? Oh, the usual. Some were reading passages of the Constitution to each other. Others were reciting the Bible or just pledging allegiance. There's always some target shooting. But I never expected to see so much food.
"Eat up, Bernie, eat!"

They had actually roasted a pig for the occasion. They gave her a name, too, although I've been sworn to secrecy about that.

Now you may think Republicans are just a bunch of jerks, but they were really nice. After showing me the secret Republican handshake, they made sure my plate was always full. But I was wary. I know what happened to Nicholas Cage in Wicker Man, so I was ready to bolt.

Most of the candidates were there, including State Senator Bob Mensch. Having never heard him before, I expected a dud. I was wrong. In a matter-of-fact style, he explained that growing the size of government is no way to create jobs, and neatly ticked off these facts in support of his argument.

* Pennsylvania has the second highest number of unemployment claims in the nation.

* Pennsylvania is ranked #45 in job creation. Four years ago, we were ranked #44, so we're going in the wrong direction.

* Our 9.9% corporate net income tax puts us in a tie with Iowa for the highest corporate income tax in the nation.

* Rendell has increased the budget by 40% over his years in office.

* The feds will no longer fund about $800 million in Medicare and Medicaid claims, leaving that expense to the state.

"We can't keep going in that direction," he quietly said, noting that our bad business tax policies must change. Asked about the jobs created by the new casino industry, Mensch noted the gambling industry "does not pay much more than McDonald's or Burger King."

Mensch's message would resonate anywhere, which may explain why he is one of the rare Republicans able to garner union support.

Mensch was a tough act to follow, and none of the other candidates came close.

Ron Shegda (running against Bob Freeman) spoke about gas while his sister kept filling plates with cookies and cupcakes and taking them out to their car. I'll bet they had one hell of a bake sale. Shegda, in a blinding tie-die shirt, droned on while his sister scooped up the goodies. Eventually, someone from the exec committee signalled him to wrap it up.

Matt Connolly (running against Lisa Boscola) brought his cute daughter, who wowed everyone with her singing. He didn't need to speak after introducing her.

Dave Molony (running against Joe Brennan) asked how many people there were from South Bethlehem. Not one person raised a hand. "That's what I'm up against," he lamented, referring to Joe's heavily Democratic district. Dave brought his good-looking kids, too, who must take after their mother. Dave said he wants to get Harrisburg's "taxaholics" into a 12-step program.

Joe Emrick (running against Charles "don't call me Chuck" Dertinger) had just finished working out. "Just remember the 3 Bs. Be awesome. Be like me. Creatine." Emrick also bragged that in Upper Nazareth, were he is a Supervisor, taxes have actually gone down 7%, which does buck the trend. I think he called Dertinger a girlie boy.

Justin Simmons (running against Mike Horton). "I knocked on 10,000 doors." How many answered? Justin had to be home by 5 PM. They were having macaroni.

Ron Angle (running against everyone). "Did I tell you about my run-in with the judges?" No sooner had he said that than sirens began to wail from a distance. "Morganelli's coming for you!" someone shouted.

"Ron Shegda (running against Bob Freeman) spoke about gas while his sister kept filling plates with cookies and cupcakes and taking them out to their car. I'll bet they had one hell of a bake sale."

A cheap shot against an obviously disabled woman. You're a real class act, OHare.

I try. Her brother is obviously disabled, too.

I bet their pulled pork sandwiches were awesome! Now I have to get back to worl on my literary disaster.

Tell the truth, they named the pig,"Annie".

I hear Stoffa was in attendance. True?

Any buzz about possible Republican candidates next year for various offices?

Was Pat Tommey there?

He was not, but sent some of his door knockers. What knockers!

Republicans that can read?

Oh yes, they are products of our public school system, too. You wouldn't mean to suggest they weren't taught propwerly, would you?

Your comments about Ron Shegda and Justin Simmons, at very least, are good reasons why it was a mistake for Ron to bring you there. Shame on him. Shame on the leadership for allowing you to stay.

I've been thrown out of better places, but that would have been one helluva' story.

Any Republican who takes Shegda seriously needs help, probably more than I can provide here, and that's no joke.

As for Simmons, he is young and presumably has something called a sense of humor.

That's a trait I find among most Rs, who are willing to laugh at themselves. Shegda and his crowd are exceptions.

I can't beleive that that the Lehigh Valley "Independent" allowed Bob Mensch's comments to pass without some knid of retort.

We need to raise taxes and make government bigger!

Actually, the GOP does love pork just as much as those the villify.

Check out the tentative budget deal. Schools getting $250 million more. Human services aid to counties got cut over twenty percent without any changes in mandated services. And, a borrowing authorization for $600 million more for community redevelopment (Rendell's cardboard check program) so politicians can buy more votes with borrowed money.

Patting themselves on the back for fixing NOTHING.

All you can do is hope these newbies will get elected and not follow the same path. Unlikely, but what else have we got?

The tallest man made structure in the Slate Belt is a landfill.

That's because they tore down the Flory Milling silos in Bangor Borough. The most well-built structures in the County. It took them all summer to knock them down.