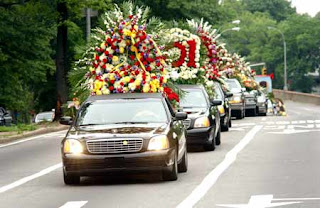 It's the home formerly owned by legendary criminal defense lawyer and the last real Democratic party boss in Northampton County, Justin Jiralanio. Located on a large 2.74 acre tract at the southeast corner of Linden Street and Butztown Road, 2854 Linden St has been owned by Dino P. Cantelmi for the past nine years.
Twice, in 2000 and 2009, Cantelmi tried, and failed, to obtain a use variance for a funeral home in this residential area. His latest proposal is Cantelmi Condominiums, which would entail demolishing Jiralanio's home and replacing it with 21 townhouses, complete with individual driveways and 51 parking spaces.

If Bethlehem's proposed, "user friendly" zoning ordinance is adopted, Cantelmi will no longer need that condo or a use variance. He'll finally be able to operate that funeral home because Bethlehem's Planning Bureau has recommended changing the zoning in that area from residential to light commercial. I'm sure the funeral processions along Rte. 191 will be no inconvenience at all.

Incidentally, Cantelmi is Bethlehem Mayor John Callahan's brother-in-law. That proposed zoning ordinance sure is friendly to him.

"I can see this is a sticking point," conceded Planning Bureau Director Darlene Heller, who made the presentation. "I get it. We noted it."

Another sticking point is a change in zoning along Easton Avenue from residential to commercial. When Bethlehem's Planning Bureau first tried that in 2005, thirteen nearby residents complained to City Council that this rezoning would just make "the Stefko-ization" (a reference to the commercial development along Stefko Boulevard) inevitable along Easton Avenue. Every member of City Council echoed those reservations, and the rezoning idea died.

Despite a clear indication from City Council, Heller was adamant. "Our office still believes CL [light commercial] is the appropriate zoning there," she declaimed.

"Unless you're a residential owner out there," grumbled Bethlehem resident Dana Grub. "What you need to do is put yourself in the shoes of the people who live in these neighborhoods."

"We're going to make a note of that and look at it," answered Heller.

Hotel Bethlehem owner Bruce Haines complained about plans to rezone a block at Market and New from residential to commercial. "About five years ago, thirty neighbors got together and spent $50 thousand to keep a bar out of a historic area," he noted, opposed to the idea of rezoning residential districts as commercial.

One unidentified resident complained that the new zoning ordinance is designed "to take care of our preferred property owners," adding that in a light commercial district, business owners can erect five-story buildings next to one-story residences. Heller downplayed that possibility, stating it would require a very large tract and ample provisions for parking.

Bethlehem resident Al Bernotas, currently involved in litigation against Bethlehem's Zoning Hearing Board, complained that the new ordinance eliminates restrictions on 2-ton commercial vehicles parked in residential neighborhoods. "I don't want any tractor trailer parked next to my property."

Although the proposed zoning ordinance was treated skeptically, many provisions were complimented, including parking lot lighting provisions and shared parking.

Believe it or not, Heller thanked everyone for coming and explained there is no specific timetable for enactment of the zoning ordinance. After receiving input and making changes, the ordinance will be reviewed by neighboring municipalities, school districts and the LV Planning Commission. After that review, the ordinance will go to City Council only if there is a recommendation by the Planning Commission.
Posted by Bernie O'Hare at 6/29/2010 12:25:00 AM

Allentown has a new proposed zoning ordinance posted on its website. What comments do you have on that?

Oh Bernie, you hit the nail on the head. Whenever a community decides to "rezone", that is when the real deals are struck in a very subtle way.

Great photo! Whose funeral procession is that, the popes?

it sounds like the public hearing process is doing what it is supposed to do: act as a check on proposals and allow council to evaluate. There is going to be some contention in this process. that's good. it should lead to a better product.

For Bethlehem, it was very contentious, but I agree that it will lead to a better final result. The one message being delivered most clearly is that too much residential to commerical light rezoning has been proposed.

As a required courtesy when running for public office, I visited then County Chairman Justin in that house to advise him I was running for Bethlehem City Council in 1973. He was less than pleased and I had to advise him that I was not seeking his permission but only advising him that I was running. He wanted me to kiss his ring, unfortunately, he always kept it his back pocket.

More on topic. Cantelmi family in Bethlehem Area is one of the very best from Dino Sr. on down the line. They should have been approved for funeral parlor when first proposed at the location is my opinion.

Joe Long could not even ever come close to what Justin contributed to community as Party leader though I disagreed with him very often. That's life in the big city.

There is a bank on the northeast corner of Butztown and Linden, and a gas station/mini mart next to that, and another gas station and then a restaurant. On the other side of Linden there is a bank and a strip mall in the block just to the northwest of that intersection, and there is a professional office and apartments on the NW corner. There are two other funeral homes on Linden Street south of that intersection. What's the problem?

Although she did not go into the specifics you mention, that was the point made by Darlene Heller last night. She believes the zoning map should reflect the existing land use.

The objection of surrounding residential neighbors is they do not feel it should be a right. They feel an owner who wants to develop a business shoukd be required to come in and seek avariances as a way of deterring continued commercial development of residential aareas.

Bethlehem is going to Hell in a handbasket. Everything is who has the biggest wallet. Nice town going down the tubes. In a few years you will have the mess you have in Allentown.

Great job in covering the public presentation of the new zoning ordinance in Bethlehem. This comments sections draws out some interesting points of view. Transparency cannot hurt the neighbors or neigborhoods. Special favors are a way of life. Sunshine usually kills mold and bacteria. Let the sun shine on Bethlehem!

The suggestion/intimation that Callahan was doing a special favor for his brother in law is ridiculous. As a previous comment pointed out, the area in question is full of commercial enterprises.

As I understand it, the redo of the zoning ordinance was done to better define the scope of expansion of commercial areas within the city, so that commercial businesses were not seeking variances in residential neighborhoods.

Al, Bethlehem is lucky to have so many citizens like you, who take an interest and are willing to ask the hard quiestions.

Ms. Heller explained that point last night, but ran into a buzzsaw of residents who want those comercial businesses to continue seeking variances because they do not want to make continued development along Easton Avenue or Linden Street to be more, rather than less, difficult.

As far as Callahan and his brother-in-law are concerned, I am reporting what several people were saying last night. The very point of last night's meeting was so that concerns like those could be expressed.

Do I think it's true? I doubt it. Cantelmi is tring to develop a condominium there now, which should be easier if the area is re-zoned. The same is true if he reverts back to the funeral home concept. But I think that is more likely a conicidence than anything.

Having said that, this is why the Mayor should discourage relatives from being part of his government. This very same Cantelmi is, I understand, a member of the parking authority. The argument could be made that these positions, combined with access to the mayor, give these relatives inside infiormation unavailabale to others.

Don't forget the Mayor's uncle who is head of the Sewer Agency.

Anon 12:52 - I've read your comment 5 times trying to figure out what you're talking about. Across from the house in question is a bank, 7-11, gas station and restaurant. On the other side is a dentist, restaurant, Walgreen's. I've been driving back and forth looking for that other gas station.Two funeral places? The closest is at least 3 miles, maybe 4, the other is down by Market St. What's the problem? Guess.

I thought Callahan married a Villani, not a Cantelmi?

Al Bernotas, When did you become a resident of Bethlehem, and where did you come from?