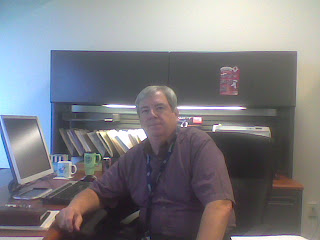 Who is Tom Harp? I wrote about Tom in 2009, and will repost an excerpt here.

He's a grandfather, a very proud one, too. When I walked into his office yesterday, the first thing he did was show me two pictures of his 8 year-old grandson, a heavy hitter in Catty, who is missing one of his front teeth. That makes him look even tougher. Tom throws little plastic golf balls at his grandson, which this slugger nails with a fierce-looking, orange-colored bat. He's playing Fall ball this year.

Tom grew up in Bethlehem, graduating from Liberty ('67) and Moravian ('71). After that, he started a long and distinguished career in human services. He began by working with the developmentally disabled in White Haven. During his 8 years there, he picked up a Master's degree in Counseling from the University of Scranton.

Tom returned to the Lehigh Valley as a counselor in Allentown's Office of Vocational Rehabilitation, helping people with disabilities find work. He was promoted to Supervisor and eventually became the District Administrator, overseeing a staff of 35 people in four different counties. He ended his 35 years in human services as the state's bureau director.

Over this time, Tom got to know Stoffa, who then headed Human Services in both Northampton and Lehigh County. Stoffa recruited him to join the Allentown Kiwanas, which does a lot of work for downtown Allebntown kids with youth soccer, the Boys and Girls Club, Salvation Army and some arts groups. Once retired, Tom intensified his work with the Kiwanis and even joined the board at the LV Center for Independent Living.

Stoffa, who had avoided filling the Deputy Director of Administration position in an effort to save the county some money, soon found that he and his staff were overwhelmed. So he ended up recruiting Tom again, but this time to work for Northampton County. Tom accepted a rather low-paying job to help a friend, and this is how he describes Stoffa. "He has the qualities an elected official should have. He's honest. He's a straight shooter. He cares about people. He's very level-headed. He thinks things out. You are attracted to people you can respect."

So just what does Tom do at his do-nothing job?

* He's the county's risk loss coordinator. That eats up half of his time, and the county gets a $8000 annual reduction in its liability policy as a result. He also helps prepare the Requests for Proposals (RFPs) for all fourteen insurance policies.

* He's the county's point man for safety, methodically attacking health and safety priorities. He is currently engineering a program to get county workers certified in CPR and the use of a defibrillator. He's also formulating an EMS emergency action plan.

* He writes the county newsletter, which is only distributed internally for now. He tells me a newsletter may soon be made available for the general public, published on the county's web page.

* He is the county's liaison with its thirty-eight municipalities and four Councils of Government (COG). He attends all the COG meetings, which are conducted after hours.

* He is the county's Act 32 coordinator, and is currently setting up the initial meeting for the appointment of a single tax collector.

* He is the county's conduit on the Bachmann Publick House, the county's oldest building. Currently, he is coordinating a transfer of this treasure to the Northampton County Historical Society and Lafayette College.

* Naturally, with his background, he's the county's disability specialist, and is working on a way to make it easier for the disabled to access the courthouse.

* He drafts and researches the issues for county proclamations.

* He initiated and administers the county's prescription drug program.

* He prepared and regularly updates a Directory of County Services.

* He fills in for Stoffa at meetings the Executive is unable to attend.

One thing Tom is not is political. "I don't want to be part of that," he tells me. Clearly, the County is getting its money worth from this guy, described by John Stoffa as a "joy" to be around. If this is an example of cronyism, we could use a few more just like him. He's somebody's grandfather. He's here to help. He works hard. The anonymous shots Tom gets here are totally out of line.
Posted by Bernie O'Hare at 10/31/2011 12:21:00 PM

He's a saint. An absolute saint.

not a knock on Tom, but this predated him. Heckman initiated one.

He is hard working and talented.

He will do a fine job!

he'll be OK as long as YOU don't corrupt him!

He follows in the proud tradition of Davey Galick, Bob Dady and this guy.

A great place to park your politcal cronies. Thats the same reume they all used.

He certainly has the John Stoffa ass kissing part of the job down pat.

Another Stoffa hack from his old days. Notice that Stoffa gave him a chair so he can collect yet another pension.

Nice job taking crdeit for things others have done. Very classy. Typical for this gang.

Guy even looks like Dady. That is a nice cake job to have. nice pay, great bene's, nice office to hang out in and a pension to boot.

Not bad. Good to friends in high places.

You are a very sad human being. Please get help!

Every Director of Administration is "Acting".

Given that this Administration has done nothing but almost destroy Gracedale and spend money, Harp or an untrained monkey could be in Stoffa's cabinet it would make no difference.

hey, easy on the monkey references. those are proprietarial