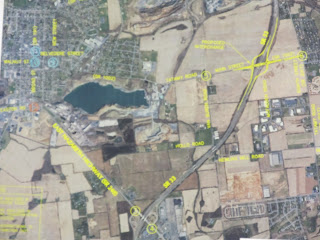 Northampton County Council Prez John Cusick, who lives in Williams Township where the Chrin Lanffill is located, voted No. Ann McHale, who has a business relationship with Chrn, abstained. Tom Dietrich apparently got lost on his way to the Courthouse. But the remaining six Council members last night voted to approve a TIF, which will allow for the construction of an Interchange in Tatamy, as well as a massive 689-acre industrial park in Palmer Township. And right after the meeting, Executive John Stoffa signed an agreement with Chrin, under which the County will reap $2 million for farmland preservation.

Once again, Palmer's Dale Colver spoke in support of the TIF. "We are controlling the zoning," he affirmed, noting there will be "no big boxes." He added that this is a regional project affecting 7 municipalities. Once again, former State Rep. Rich Grucela added his support. "I've never seen a better deal. than you're getting here." he argued.

A new face joined the litany of TIF supporters - Easton Mayor Sal Panto. Although he has worked for Chrin and admitted they contribute to his campaign, he told Council he was not standing before them for his sake.

"I'm here for the residents of my City. The City needs jobs. I need  jobs for my residents and you need jobs for the County as a whole. Every day I get requests for jobs.

"We need to save our lands. I applaud what the County has done. I applaud what has been done with the $2 million that is going to be contributed. I think that's all great. But the first thing we need are jobs. Everywhere I go, people are asking me for work, and I feel really badly about them. A lot of people we put out of our jails are coming back in because they can't find work."

Cusick was upset that the agreement was finished only moments before the meeting, but it had already been signed by Chrin. He was going to offer an amendment that would increase tipping fees at the landfill, but withdrew it.
Posted by Bernie O'Hare at 10/21/2011 02:22:00 AM

Many still see the $2 million as pay to play. It has that smell to it.

I guess with this County Executive the Express Times doesn't apply their legendary non-biased,"smell-test" anymore.

You are nutz. No question that Angle held Chrin up. If he wanted his TIF, Angle told him it would be a lot easier if he could cough up $2 million. But the beneficiary of this "bribe," as Dietrich called it in his little schoolgirl note, is the taxpayer. Angle did exactly what he was sent to do, and it was all open. You don't like it bc you don't like who negotiated the deal.

props to Karner for puttin this hog together and getting it done.

I will believe it when I see it. Its amazing how the TIF worked for the former Bethlehem Steel. Where are the jobs? The Sands, that would have come no matter what. NCC, that was needed for overflow. These TIFs seem to never work. Someone will be on the hook when the bills come due. And, to think its Chrin because of some piece of paper, yeah right, I have some land to sell you Florida too. Lots of luck County, Easton and Township taxpayers, this will not be as nice, clean and simple as you were sold. Take that to the bank, mark it down here. Lets see in 10 short years where this whole thing stands.

Bernie- does Lehigh Valley Ramblings include any coverage of Lehigh County? Seems not?

JC and JK will fit very nicely into Norco

I love this blog, thank you.
Only you posted a movie of ron angle acting like a jerk to the people at a recent debate.
Only you made public that the tif-vote-for-open-space-money might be a bribe.
Only you started people thinking of Bobble head as a Rat-snitch-Republican.
Only your writings can make people second-guess the county exec's good-guy image.
Only you go into detail about how angle is not warm and furry.

"Bernie- does Lehigh Valley Ramblings include any coverage of Lehigh County? Seems not?"

Not as much as last year. I'm very sorry, but it is so hard for me to get to all the places and there are so many good stories. i wish I could do better.

' Someone will be on the hook when the bills come due. And, to think its Chrin because of some piece of paper, yeah right, I have some land to sell you Florida too."

Chrin IS on the hook, as well as the people buying the bonds. NOT the taxpayer. There is no risk to us.

"props to Karner for puttin this hog together and getting it done."

Alicia pretty much deserves ALL the credit for this masterpiece. I'd like to sit down and ask her how she was able to get so many people on board. She even got me, something I told her would never happen.

Above say's it all BO you do no good to the rest of the trio.
If they were smart they would get rid of you in a flash, but then they are not too smart.

Keep up your cycling, jogging and other efforts to stay healthy, so when this thing goes bad in a few years, Chrin escapes unscathed (don't think someone of his ability hasn't planned for the possibility) and we are left holding the bag, you will be around to publish a robust retrospective on why this was such a good idea.

If it really was a "can't miss", Chrin or someone else would have made this happen already, no special consideration required.

9:04, Point taken. On the other hand, he's a businessman taking advantage of a program that is available Wouldn't he be foolish not to do so?

The devil is in the details.

Sure, Palmer Township "controls" the zoning, but there's always new zoning hearing boards and supervisors. And just like our friend Abe in Bethlehem, you can always go through the zoning process to get what you want.

This group of supervisors may be firmly against residential or warehouse development being built on the TIF site, but nothing stops Chrin from pursuing either type of development or a new board supporting it. And all those guys will eventually leave the board.

And you know the pleas to do something will come. You'll get the "well, the economy only supports warehousing at this site, and we have to do something on the site because everybody agreed to the TIF and we can't just have this sitting here vacant...we need these jobs..."

What do you see at the majority of Pennsylvania interchanges? Warehousing. What is Lehigh County going to get for their TIF at 863? Warehousing. Why would this obscure interchange in Northampton County be any different all of a sudden? All you have to do is take a trip down I-81 to Carlisle to see what'll happen at this interchange or take a trip next door to routes 863 and 100.

Yes, he would be foolish not to (or is it "to not"?) take advantage of it.

I do not criticize him, I criticize "us". Through our electeds, we are the ones approving it.

I hope it works out. Who would not be for the promised result? I just see this as more corporate welfare type stuff that doesn't need to happen. Chrin, and those of his accomplishment, have never lost access to capital, despite the media constantly harping "Credit markets are frozen, credit markets are tight".

They use that story as cover to get the public to assume the risk they would normally be required to take for the reward they seek.

I appreciate your perspective and under many circumstances would agree with you.

I know a PA company in gas field work that's invested $12 million in a new facility that will employ 125 to start; 200 at full capacity. Seven months elapsed from initial planning to the first POs for tooling and machinery. The plant will be operational in January, just 11 months from inception. No tax incentives or stimulus given.

"We need to save our lands.

What a crock of shit.

Panto said it best, we need JOBS! People in this county that are employed should refrain from commenting. What do they care? They have jobs --- and the county is on the hook for Nothing! This was a no brainer and Cusick needs to vote for what's best for us residents unemployed not her personal opposition to the landfill. BTW when id he move to Williams? That landfill today was a dump long before he was even born. I think they have done a wonderful job with converting the dump they bought into a state of the art double-lined landfill complete with methane recovery.

Panto's comments are a Freudian slip:

"I need jobs for my residents".

There are basically two types of Democrats: Those who need have their lives taken care of by others, and those who believe they are here to do just that.

Pay to play pure and simple. If this were anyone but Stoffa and Angle Bernie would be going all Long Dems on their asses.

If Grucela likes it, be very afraid. And he's a liar to boot. The best deal he's every seen is his multiple pension slop, having never earned a private dollar in his life. Gruel only like that which costs taxpayers money. His career was remarkably consistent in that regard.

WHAT JOBS will this actually bring, it will just add to all the other EMPTY office space!

Let's see. We lose open space at the same time politicians take taxes from us under the guise of preserving open space. We create more boxes looking for business while trying to figure out how to use brown fields like Beth Steel for "arts." We have more available office and warehouse space than one can say grace over. We give a rich guy and his politically connected company another boatload of cash to assist them in increasing his fortune. It works, however, because we supposedly create jobs under this magical formula that has delivered the current, nagging high unemployment rate. Chrin knows that politicians like Panto and Grucela are hybrid of whore and idiot. He' made a fortune with this basic assumption. And we put them in office.

We really are fucking retarded.