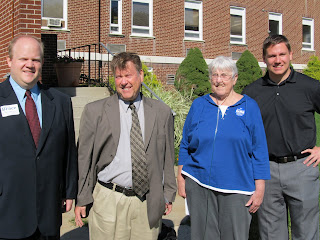 Lehigh County's four Democratic Comm'r candidates took advantage of a smiling sun yesterday to conduct a news conference right outside Cedarbrook nursing home, making clear that each of them is opposed to any effort to sell the facility. While Democrats Geoff Brace, Gloria Hamm, Dennis Pearson and Tim Waitkus squinted into the sun, three Republicans candidates running together as a team - Vic Nazziotti, Scott Ott and Lisa Scheller - were spinning out a news release accusing the Dems of trying "to frighten people with false information" and "using the elderly and ailing to advance their political agenda."

In Northampton County, I can assure you that Gracedale residents who have no idea what planet they are on, would be at a news conference concerning the facility. Unions carted them to several Council meetings ... at County expense, of course. The tactic did tug at a few heartstrings, especially as TV cameras whirred away. But I doubt very much that it was good for the residents.

So yesterday, I expected to see a few elderly residents dutifully lined up in wheelchairs next to the Commissioner candidates. I figured one or two of them would be in tears, crying "Where will I go?" a la Gracedale. But it was just the candidates and party boss. Gloria Hamm, who is actually an incumbent, made a point of stating that no residents were asked to participate. "We don't really like to use residents as a poster child," she explained.

Hamm, a R.N. who knows Lehigh County Human Services inside out, also objected to calling Cedarbrook the "poor house," noting that many of the residents are private pay. "Their fiscal responsibility is excellent," she added. "This is a four-star facility." She concluded she would oppose any attempt to privatize Cedarbrook.

Candidate Dennis Pearson mentioned that during the Spring primary, he was the "lone wolf" at a Wescoesville debate in which Republicans Mazziotti, Ott and Scheller "hinted" they would get rid of Cedarbrook. "This is a fine institution," Pearson argued. "This institution has its beds filled," Pearson added. Gracedale, in contrast, has been suffering from a declining census and the drop in revenue that inevitably follows. Pearson also panned the Glenn Eckhart idea of using work release inmates to perform janitorial services, especially since nursing home workers must undergo a criminal background check.

Another candidate, Tim Waitkus, explained that he understands the "power of the profit motive," especially since he works in the health industry himself. But Cedarbrook adds "$1.9 million on the County budget sheet. In reality, it's a cash cow." He questioned whether selling Cedarbrook would really be fiscally conservative.

Geoff Brace, a downtown revitalization specialist, explained that the refrain he hears as he knocks on doors is that voters want politicians to quit fighting and start working to make sure that government works. "One of the pieces of Lehigh County government that actually works, and that probably works best, is Cedarbrook," he stated. "Its services are exemplary. It nets $1.9 million for Lehigh County taxpayers, taking some pressure off the need for property taxes." Brace noted that, without Cedarbrook, Lehigh would have a $1.9 million hole that would have to be filled with property tax increases.

As I mentioned in yesterday's post, comparing Cedarbrook and Gracedale is an apples and oranges comparison. And as Gloria Hamm and party boss Rick Daugherty explained, one of the biggest differences is that in Lehigh, County officials from both parties were "very proactive" in fulfilling capital needs. In Northampton, however, leaking windows could wait. A new elevator could wait. And so on.

In a "Gang of Three" news release, Republican candidates Scott Ott, Lisa Scheller and Vic Mazziotti, Democrats are accused of manufacturing a controversy where none exists. Mazziotti is quoted as saying, "Since they jacked up your taxes by 16 percent last year, I suppose they're desperate enough to fabricate an issue in an effort to distract voters from their record. People are smart. Voters won't be fooled."

I know Vic. The quote attributed to him sounds very much unlike him, so I called him. What Vic told me was that he was quoted accurately on Patch when he stated, "I’m absolutely beyond a doubt convinced that the absolutely right thing to do is to sell the county nursing home. Keep in mind that two-thirds of the counties in Pennsylvania do not own a nursing home, and we do not have old people dying on the streets in those other counties.”

In fact, when I spoke to him yesterday, Vic honestly told me that he still thinks residents would receive better care if Cedarbrook were privatized, but that he was persuaded by Tom Muller's Apples and Oranges comparison. There are "no plans" and "no plans to plan" on selling Cedarbrook.

That's a change in position. In a tea party questionnaire, Mazziotti  is "strongly against" keeping Cedarbrook. Lisa Scheller  is "somewhat against" keeping the facility. "We need to insure that our elderly are cared for compassionately and effectively, and that would be my only hesitation to privatization," she explains.

Scott Ott failed to state whether he supported Cedarbrook, but stated this. "There’s no longer a solid reason for the county to be in this business. Many private-sector firms do the same thing for the same customer base at competitive prices. Anyone who suggests that only government can provide this service as well, or with as much caring, is simply ignorant, self-interested or intentionally misleading. Transitioning to private ownership will not only improve the facility, but will help to get taxpayers out from under long-term, unsustainable promises made to public-sector union bosses by short-term, ambitious politicians."

Don't know about you, but it sure sounds to me like they wanted to sell it until they realized it might be politically unpopular.
Posted by Bernie O'Hare at 10/18/2011 12:00:00 AM

Email ThisBlogThis!Share to TwitterShare to FacebookShare to Pinterest
Labels: cedarbrook

Gracedale was doing great until the team of Ron Angle and John Stoffa started to destroy it in order to pull off their midnight sale. People caught them in the act and democracy stopped them cold.
After Stoffa is gone the new County Executive will return Gracedale to the smooth running "cash cow" it was before Angle/Stoffa and will also restore truth and integrity in county government.

Keep telling yourself that.

Anon 12:08, you are right on the money. People sniffed them out at the polls.

Sounds like a vic flop to me. I am sure the tea party will be happy to hear this after being told something else.

It is a definite flop - just look at the timeline. Muller's presentation was in 2010 and Vic and Ott made their comments in May, 2011 just in time for the Tea Party primary. Classic bait and switch - say one thing to win a primary and then another to try and win in Nov. So much for the "integrity" and "spine" that they both talk about all the time.

I know you like Vic, but he appears to be more than a bit of an opportunist in this instance.

Vic told the morning call that he still favors selling it. He hasn't changed him mind, just the verocity in his language.

You're post actually makes some points in favor of privatization.

If Cedarbrook is not the "poor house" as Hamm calls it, why is the county in the nursing home business?

And why is it making a $1.9 million profit? It would seem they are making residents pay well more than their "fair share".

Finally, why is any of that $1.9 million profit being used to offset the general fund? It should be used (or set aside) to benefit Cedarbrook and its residents, not as a way to make the general fund look good.

I'm not a proponent of privatizing Cedarbrook, but nothing in your post makes a compelling case for the county running it. Most of all, while some might be willing to listen, it doesn't seem like ANY of the candidates actually want to sell it either.

This seems to be an "issue" only because some of the candidates are trying to make it one.

You can say that this is how politics and free speech and honest discourse around public policy are supposed to work.

The Democrats had an issue. All comments that the GOP candidates made previously made the point that they favor privatization.

The Dems held a news conference without using people in wheelchairs and aging residents as a weapon, to simply and respectfully draw attention to the difference in positions.

The GOP candidates basically said that they had heard the voters, and the numbers, and revised (not reversed, but revised) their position.

This is EXACTLY how public policy is supposed to be debated and happen in a free democratic society.

Of course, it sounds like the GOP candidates had an attack news release ready to go condemning the Dems. That's something that's not necessary. They are very negative in their language and comments. They should take a lesson from the Dems and keep it a little more respectful.

Thats what happenes in Northampton County. The policians had a plan to sell Gracedale. They ginned up numbers and studies to prove their point.

The people disagreed but the politicians didn't listen. So the people went to the polls and made their point there.

Now THAT is how democrcy workS.

Watched Business matters. Angle once again made an ass of himself bullshitting about Gracedale.