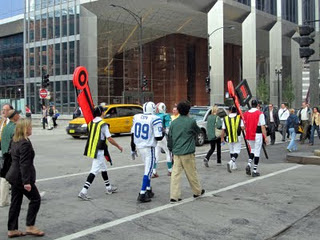 In youth football, the one job nobody wants is the chain gang. As players stand on the field, ready to kick off, the announcer plaintively calls out for three volunteers. It often takes a threat of a delay of game penalty before someone steps forward.

When I'm there, they only have to wait for two volunteers. As far as I'm concerned, it's the best seat in the house. And although I'm standing in "enemy" territory, most of the coaches and parents are no different than the ones on the other side of the field.

Completely nutz. Fortunately, most of them know they're crazy, and will sometimes even apologize after breaking my eardrums. But it is an exciting game, usually accompanied by a loud PA system and cheerleaders to wind people up even more.

The players work themselves up into a frenzy, too, slapping their pads in a ritualized demonstration that reminds me of ancient warriors clanging their shields with a spear or sword.

It is, as one of my readers noted, a little war.

That's what happened on Saturday, when Allentown's South Side Mounties visited the Bethlehem Steelers.

The 125-pound team consisted of only about 14 kids. But almost that many fathers stepped out onto the field with their sons, all of them thinking they were coaches. Every time the ref made a call against them, they would scream there is some kind of bias against South Side Allentown. Between nearly every play, almost every one of these fathers kept stepping out onto the field, shouting out last-minute instructions.

Now the ref kept warning these guys to stay behind the line, and they really tried, but they did it the entire game. They couldn't help it. The Mounties, though smaller in number, caught the Steelers flat and actually had the lead going into the second quarter. They were on their way to an upset.

When the Steelers finally realized that the Mounties had no idea that they were supposed to roll over and lose, they woke up and started moving the ball and scoring points. They took the lead in the second quarter and managed somehow to stay on top, even though these South Siders fought furiously.

Although the kids on the field were really valiant, some of the wannabe coaches were despicable. In the third quarter, one of them started shouting, "Hurt somebody!"

At that, I turned around and said to him, "You mean 'hit somebody,' don't you?"

"No, I mean 'hurt somebody!'" Then he began shouting it out again.

I pointed out that these are just 11 and 12 year-old boys, and he couldn't want one of them to get hurt, could he?

His answer was Yes, and he shouted it again.

I turned to someone who I thought was a real coach and asked him to do something, and he said, "It's just a figure of speech. This is football."

I'm sorry, but asking a bunch of boys to "hurt somebody" is no figure of speech. Then the dude on the box, who heard what was going on, started freaking out on the wannabes, and I was pretty sure a riot would ensue.

Yellow flags were thrown all over the place and kids sent off the field while the refs came back and gave South Side a "warning," which was promptly ignored.

After that, a board member breezed by to make sure everything was OK, and a ref got us off the field as soon as the game ended. The box dude wanted to talk to the South Side parents, but I talked him out of it.

Bernie... this has been going on for years with youth football. No way its going to change.

That's why teams like that lose all the time, the coaches don't have a clue!

Yet another example of how parents ruin things for kids.

I can't remember the last time I saw kids playing football in an empty lot by themselves.

At least they're not participating in soccer. What a horrible sport.

I like cross country and track. No favoritism. The best kids are easily determined. They cross the finish line in order. Parents can only sit and cheer and hope for the best.

Every Father sees a future scholarship for their young budding football great. That is one reason it is so intense. The other is the vicarious testosterone at work. It is a wonder the kids continue to participate with all the pressure that they are under. I would imagine they cannot wait to get off the field and have some fun playing games. But what do I know: my kid was in the marching band.

Most of the kids in it love it, or they would not be there this long. Dat's favorite is basketball, but he loves just about any sport when he is playing it.

Do they have marching bands at a kids' level? If so, where?

it is a sad world we live in my son played freshman football last year and before the game the parents of the kid playing behind him said maybe number 11 will get hurt so our son can play i had to get up and walk away i was so enraged. here they are wishing for a player on their own team to get hurt so their son could play rather than telling their son to work harder to earn his position

"At least they are not participating in soccer. What a horrible sport."

Can you please enlighten us all with respect to what makes soccer such a horrible sport?

You can remain anonymous, Anon 2:49 ... do you have the requisite courage to publically back up your most interesting statement with elaboration involving any substance, real or imagined?

I'm sad to think soccer is such a horrible sport but I have been in the dark for many, many years.

You should have a blog piece exposing this travesty of Justice, O'Hare.

My grandson plays 3 sports - baseball, football and basketball. I picked him up one day after school, and he told me he and his classmates had been playing soccer.

I expected to hear him disparage soccer players and the sport, but he instead told me how tough the game was, with all the running and getting kicked.

It's a great sport and is getting more popular here in the US every year.

Perhaps we have finally found something we can both agree on, O'Hare.

Personally, I certainly favor some sports over others. Golf, for example, ranks rather low on my list for enthusiasm. That being said, I do not believe there is such a thing as a 'horrible sport' for children to participate in.

Perhaps now more than ever, considering I hear alot about how fat our children are these days.

But there are many more benefits to participiation in youth sports than just physical fitness; hell, we could be here all day.

I always remember our high school varisty coach giving the same speech every year, though ... players too old for junior varsity who don't really have the skill to be promoted to varsity would NEVER be cut from the program, so long as they were willing to come to practice everyday and respect team rules.

'Because I know what other kinds of activities are out there for kids' was always the rationale behind this policy.