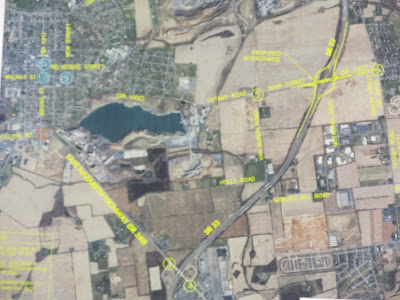 It was a small meeting. Two traffic engineers were there to make a presentation, while another two sat in the audience with their lawyer. Four people from the media were on hand. But only about 6 people came who are directly impacted by Charlie Chrin's proposed Route 33 Interchange at the Palmer Township and Tatamy border. Amazingly, they made some excellent suggestions at the meeting hosted by Northampton County Council member Ron Angle. Executive John Stoffa and Council member Barb Thierry were on hand as well.

Angle invited AnnMarie Vigilante, a traffic engineer at Langan Engineering, to present an overview of the project, especially its impact on traffic in the area.  The Interchange will be a classic, signalized diamond, with the roads near Route 33 widened and well-lit.  No third party rights of way are needed. There are no wetlands, endangered species or forests. But in an area prone to sinkholes that swallow up bridges, a detailed geotechnical must still be conducted, with at least 55 borings.

If all goes well, Vigilante states that traffic and design approvals will be done by Spring of next year, with total construction time estimated at a year.

There's no question it will alleviate truck traffic on Route 248 and along Rte 191. It's also clear that it will provide some relief to drivers at Route 33's Stockertown exit during rush hour. But the general consensus in the room is that a major Interchange will also increase traffic in tiny Tatamy, especially among drivers heading to or from Forks Township.

Denise Kobrin, an ACS employee who works at the Courthouse and who has lived in Tatamy since 1990, is concerned about the increased traffic. "It's like having a highway in our neighborhood," she lamented. And her husband Val was very concerned about the winding detours that will be in place during construction, not for his sake, but because it wll take forever for his children to get to and from school.

"The detour is going to be an inconvenience. I'm not going to lie," stated Vigilante, who explained that locals might find quicker ways to get where they need to go.

Despite the claims about traffic relief, Val Kobrin pointed out, and nobody disputed him, that the real reason for this Interchange is to make the Chrin Commerce Center more profitable. Then he pointed out that it's really unwise to start construction on a Tatamy Interchange when its Main Street bridge is still out of service. It essentially will turn Tatamy into a small island.

Work on the Main Street bridge in Tatamy, a PennDot project, is currently being held up by some gas line easements.

According to the Kobrins, no construction should start on the Interchange until the Main Street bridge is finished.

Pretty much everyone in the room agreed with them, and Angle stated he'd try to get an agreement to that effect.

It's funny. I was sitting in front of Denise and her husband, and every time he spoke, she'd whisper to him to "be quiet." I thought she was going to make him stand in the corner. Even though she was tempted to introduce her husband as "Raoul the pool boy," his point about holding off on the Interchange until the Main Street Bridge is completed, is exactly why people should come to meetings. Very often, they see things that everyone else misses.

Their points about school access are very valid, too.

Denise Kobrin is not a county employee. She is employed by ACS, which has a contractual relationship with the County of Northampton to provide information services.

Thank you for correcting my error.

More warehousing and strip development. Welcome to the Upper Macungie of the eastern part of the Valley!!

This project is a Ponzi scheme You're getting a short-term benefit that will eventually be overwhelmed by maintenance costs to the taxpayer. They aren't using lifecycle budgeting to estimate the true depreciation costs of all this new infrastructure.
It's irresponsible to put taxpayers on the hook for more long-term infrastructure maintenance obligations.

Since anyone with a pulse knows static budgeting is a waste of time as it ignores changes in human behavior and the rule that 'Stuff Happens,' they change the name to 'life cycle budgeting.'

But end up in the same place.

Until you start advocating dynamic budgeting your economic positions are useless in a serious discussion.