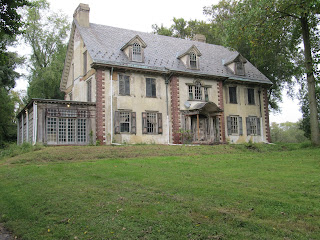 At their October 3 meeting, Bethlehem Township Commissioners had nothing but praise for a citizens' group informally known as the Housenick Committee. This group conducted six meetings to develop a master plan for a passive recreation park on a 55-acre estate located along Monocacy Creek, off Christian Spring Road. In addition, they recommended restoring a three-story colonial style mansion at the site. After thanking them profusely for their "great job," Commissioners disbanded them in a 3-2 vote.

The property in question was devised to the Township by the late Janet Housnick. Her grandfather, Archibald Johnston, was Bethlehem's first Mayor and a Bethlehem Steel Company president who built the mansion on grounds he called Camel's Hump. In addition to the property, Housenick also provided $2 million for the park and mansion.

Housenick Committee members and their supporters, who packed the standing-room only meeting, had made clear that they wanted to remain a part of the park's future, which includes a 420-unit apartment complex proposed right next to the park, on land that is zoned rural residential and is located in a conservation district as well. That was one of their formal recommendations.

"I see no reason to keep the Housenick Committee intact," stated Murphy, who said that "staff" and the Township's Recreation Committee would take it from here. "We've developed many parks in the Township, without the help of an outside Committee," added Hudak. The week before that, at the final meeting of the Housenick Committee, Hudak had unsuccessfully tried to stop them from discussing the 420-unit apartment complex, calling it a "Township issue."

Jerry Batcha, who will be stepping down from the Board at the end of this year, argued in favor of keeping the Housenick Committee active, especially in view of the "unique nature" of the park. He noted that Housenick Committee member Tim Brady is also a member of the Trust overseeing distribution of funds, and resides in a home at the park. People like Brady, stated Batcha, would "keep their eye on the ball."

As Commissioners discussed the dissolution of the Committee, members like Vicky Bastidas and Thaddeus Encelewski raised their hands, hoping for a chance to speak, but were ignored by Murphy, who serves as the Commissioners' president. When Encelewski pointed to Bastidas, Murphy cut him short. "I'm sorry. This is where we're talking," stated Murphy.

Earlier in the meeting, the public did have an opportunity to speak during "courtesy of the floor." Tim Brady told them it would be a "huge mistake" to rezone that area to permit an apartment complex, as well as a strip mall, noting that flooding during rainstorms often results in the closing of local roads. Katherine Wood, owner of a dry-cleaning business in nearby Bethlehem Village East Shopping Center, condemned plans to create another strip mall on the other side. "We have enough strip malls," she stated, noting that there are many business vacancies in the area.

Commissioner Paul Weiss, however, chided the audience, stating he "takes offense" at the notion that a high density housing project next to the park will be approved. "We're getting hung out to dry and there's nothing before us," he complained.

Weiss, along Michael Hudak and Arthur Murphy voted to dissolve the Housenick Committee. Just two weeks earlier, these same three Commissioners were favorably impressed when developer Michael Perrucci pitched a 420-unit apartment complex next to the park. At that time, Murphy had stated that the Moravian Church, which still owns the property, has a "God given right to do whatever they want with it."

Batcha and Thomas Nolan voted against dissolving the Housenick Committee, with Nolan stating "A very clear No."

After voting to put them out of business, Commissioners unanimously agreed to send letters of appreciation to Housenick Committee members. They also approved a plan that calls for $1.7 million in improvements to the park, with another $1 million for mansion restoration as a public use. The plan envisions 2.29 miles of walking trails, a pavilion, trail head and public restrooms.

Michael Adams, an Allentown resident who lived for ten years in the Township and states he "still cares," was visibly upset at Murphy's refusal to allow the public to speak on an agenda item. He noted that Allentown uses an "egg timer" and only allows three minutes, but lets everyone to speak on agenda items. "To deny the public the right to address an agenda item is Soviet-style democracy," he declared.

But President Arthur Murphy has an unlikely ally. His Republican opponent in this Fall's election, Martin Zawarski, agrees with the decision to disband the Housenick Committee. "The Township has a fine recreation committee that looks over a lot of parcels that the Township has under its control," he stated. "I don't think there is a need for further input from a third-party source."
Posted by Bernie O'Hare at 10/04/2011 01:31:00 AM

the committee is unelected, and created by and serves at the pleasure of the elected officials.

what's the big deal? if those folks are upset, let 'em run for office.

We've developed many parks in the Township, without the help of an outside Committee," added Hudak.

This is about as ignorant as it gets.
Whose government is it anyway?
Kick 'em all out of office!

The committee had become very political and an ego trip for at least three of the members.

Marty Z. hit the nail on the head.

So Hudak & Weiss stand to gain from the development as they are in the contracting business.

Sorry to say but Bethlehem Twp commissioners are assholes and the ones who are looking to get elected are just as bad if not worse!

Let's be happy that the Master Plan was approved and move on! Now is the time for the township to stand-up and take care of this property. The money was left by Mrs.Housenick for restoration of her grandfather's beloved home.

LET'S GET MOVING BETHLEHEM TOWNSHIP--YOU HAVE LET IT SIT IDLE FOR SIX YEARS!

Forestry and wetland stewardship plans must be developed and put into action and the park must be made safe for visitors to enjoy its beauty. Utilize the free skilled volunteers, apply for the grants and get the house put on the National Registry.

This is our history and our park- let's not let it go to waste. *Call the Township if you would like to volunteer your time or your talent.