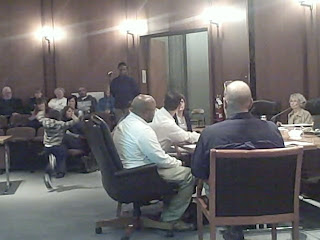 Bethlehem's St. Stanislaus Church, located at 419-429 Hayes Street, was first established by Polish Catholics in 1905. But it is one of four ethnic South Side churches closed by the Allentown Diocese in 2008. Now, thanks to a unanimous ruling by the Zoning Hearing Board on October 26, this historic church will not only survive, but become the hub for 36 affordable apartments, targeted at artists earning 60% of the Lehigh Valley's median income.

Called the St. Stanislaus Artist Housing Development, this project is the brainchild of MidAtlantic Housing Development Corporation (HDC), a Pennsylvania nonprofit that has existed since 1971. It owns and manages 51 properties in 11 different counties, and specializes in adaptive reuse of downtown properties. It provides affordable housing for 4,100 people, and provides 24/7 onsite professional management and maintenance.

Of the 36 units, 17 will be 1-bedroom lofts, 12 will be 3-bedroom townhouses, and there will be 7 ADA-accessible flats, varying from 2 to 3 bedrooms. Average monthly rental is projected at $650.

HDC's Senior Development Officer, Andre Perry, argued that permitting this reuse would be beneficial to Bethlehem. It would eliminate blight and vacant space, put the property back on the tax rolls, provide affordable quality housing and preserve St. Stanislaus Church, identified as one of Bethlehem's Historic resources.

Believe it or not, a bar is in the church's large basement. "The Poles used to like to drink," joked South Side activist Roger Hudak. But from this point, there will be no sauce at Stanislaus. The bar will be replaced with a laundry and an administrative office, and the church nave will be used as a community meeting room and art gallery.

The one major drawback, however, is parking. The lot at St. Stanislaus only provides 11 parking places. HDC is negotiating with nearby parking lots for another 25 parking spots, which would result in a total of 36 parking spots for 36 units. That is well below the 62 parking places required by the Zoning Ordinance.

This shortcoming brought Faith Moore Perry, who lives directly across the street, to the hearing. As her young son explored Town Hall, she testified that parking is already a "disaster" in her neighborhood. When she goes away, she sometimes finds two or three cars parked in her driveway, and has to call the police to have them removed. She added that "the population there is crazy," and will only get worse with an affordable housing project across the street.

HDC President Michael Carper, however, told Perry that if tenants display inappropriate behavior, they's be evicted. "We closely manage our properties," he stated, adding that someone is on site at all times. "That is who we are and that is how we take care of our situation."

Representing the Eastern Pa. Arts Alliance, Kim Plyler told zoners her organization "absolutely" supports the project. "We have at least 75 artists who are more than happy to move in tomorrow if this project was here," she stated.

In granting the request, which Bill Fitzpatrick called a "great looking project," zoners insisted that leases be filed with the City of each of the 36 units, as well as for each employee on site. He also urged HDC to be a good neighbor.

In other business, zoners approved a request from James Baggest for a subdivision that would separate a single-family unit from a multiple family dwelling at 530-534 High Street. Both properties are located on the same lot, even though they have different uses.

Finally, they granted Pamela Rodweller's request to replace her 12' x 16' deck with a kitchen at 2178 Allwood Drive. In September, Rodweller's case was delayed when she failed to post her property as a result of an inadvertent error in the zoning office. After waiting a month, she presented her case in about a minute. "We thought you'd want to take a little longer to get back at us," joked zoner Bill Fitzpatrick.

Bethlehem's Zoning Hearing Board will convene again of October 31, to continue testimony in Abe Atiyeh's application for a drug and alcohol rehab center on Dewberry Avenue, abutting Bethlehem Catholic High School.
Posted by Bernie O'Hare at 10/27/2011 02:45:00 AM

I bet Ken Kraft made this meeting. The easy ones are no problem. when it came to Abe Atiyah he bailed on the controversy. Is this what we can expect on county council.

This project sounds like a nice reuse of a beautiful church. Think it should please oldtimers too.

This is just low-income housing. Anyone who applies and meets income guidelines has to be allowed in.

I was wondering how it could be for artists only. Even though they are on the same side most of the time, in this instance, their buddies at the ACLU would sue and get some activist judge to declare non-artists a protected class.

Not a problem for me. I think they should be able to have their little commune and continue to produce junk that no one will buy (hence the need for this type of housing). Freedom of association is for everyone. Even those who would deny that right to say, the Boy Scouts or Christians, or . . .

anyone who disagrees with them on anything.

It will be for everyone, but is aimed at artists.

Anonymous 3:08 am said...
I bet Ken Kraft made this meeting.

At least Kraft does something other than stay up all night thinking up witty paragraphs...

Are taxpayers funding this group in any way? I hope not. Sheesh.

Now now Kenny relax. You Long Dem's are so sensitive. Maybe anon 3:08 has a union job like Kraft and doesn't have to worry about getting up to work.

the board just created another parking problem. they don't care - they don't live there

Are taxpayers funding this group in any way?

This type of housing if financed through federal tax credits. Hence the income restrictions.

HDC did say how it was funded, but my notes are not good enough to get that to you. I believe they said something about being able to sell tax credits to banks.

Zorn, Since parking dominated the discussion and was the basis of the restrictions, it is safe to say zoners cared.