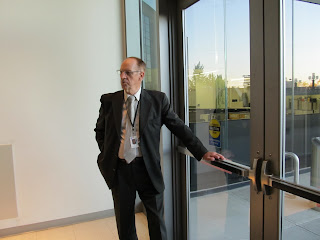 Yesterday, the combined legislatures of Northampton and Lehigh County convened in Easton for a presentation on the need for public health. I had to leave early for another meeting, but there was plenty of press coverage for a meeting at which absolutely nothing would be decided. When I left, several Lehigh County Commissioners were still MIA, probably unaware that Ron Angle had changed all the road signs so they'd end up at a witches' coven on Hexenkopf Road.

"Right around now, they're all being forced to dance nude around a pentagram," he laughed manically.

But one person was waiting for them. In fact, as people came to the Courthouse for last night's meeting, he stood there, opening the door for everyone. 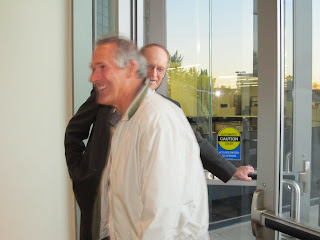 Ordinarily, everyone who comes to any Courthouse is searched by a squad or even a platoon of highly trained deputy sheriffs. They go through years of highly advanced training to learn the proper way to stick a finger up your ass.

It's why I've never needed a prostrate exam.

But last night, somebody screwed up and forgot to ask for deputies. So the County Executive, John Stoffa, served as doorman, opening up for every person who came inside the building.

He'd make a lousy Deputy Sheriff. Other than me, he just let everyone inside the building without even wanding them.

When people ask me why I admire John Stoffa so much, this is one reason why. I have never seen such a higly ranked public official act with as much humility.
Posted by Bernie O'Hare at 10/18/2011 12:01:00 AM

He does love his publicity stunts. A very savy pol he is alright.

I am sure he makes a better doorman than a county executive.

He's not running for office, why would this be a publicity stunt?

I watched that meeting last night and all I got to say is" WHAT THE HELL WAS THAT!?!

I never saw a more indecisive group than what I saw last night. Doesn't anyone know how to shit and get off the pot??

The only consensus they could come to was pushing the problem off to the next group coming in. So no matter which way the vote goes, it's the other guys' fault.

But I do want to thank them though- they have made my decisions a lot easier when it comes to election day.

"He's not running for office, why would this be a publicity stunt?"

Iam sure he could do that job better ( door mam ) then the job he is doing now.

Agreeded, as a county executive, Stoffa makes an excellent doorman.

Can we please stop the PERSONAL attacks on our County Executive? Whatever happened to dealing with any issues at hand?

The issue Larry, is that Stoffa is big on this gag gift form of management. Problem is we need a real manager.

He knew O'Hare would be there to write another fawning missive on this wonderful man of the people so he milked it. He should be in his office getting his notes together on how he can possibly fund this Public Health Department, when he is claiming he needs a 10% tax increase for basic needs.

O'Hare finds this charming, those of us who pay taxes find it more of Stoffa's goofiness and inability to deal with reality.

HaHa, I'm a humble doorman, haha. I am important but I will open the door for you, haha. Oh and I want to dump Gracedale and start a multi-million dollar new department and by the way a new 10%increase in your taxes.

That has allways been the issue with this phoony, Larry.

I don't always agree with Mr. Stoffa. I would not hesitate to hold a door for him, however. Political disagreement doesn't free us from our responsibility to behave as ladies and gentlemen.

Whatever the hell the means. sounds like something Stoffa would say when asked a tough budget question.