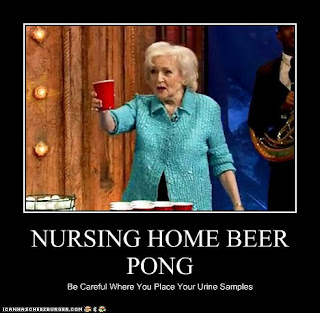 As most of you know, I was and remain an avid supporter of the sale of Northampton County's nursing home, Gracedale. County governments throughout the state are shedding their nursing homes because they are costly and inefficient. Because a County has other obligations, like fixing bridges or running a prison, they will often give those matters more priority than the capital needs of a nursing home. What happens is what you see at Gracedale, where $20 million in long-neglected improvements are needed. In the end, the person who suffers the most is the resident.

To make matters worse, Medicare and Medicaid reimbursements are actually higher at privately-owned nursing homes. So the County, which should not be forced to provide services that are being supplied by the private sector, must do so for less money.

I hope they prove me wrong, but I believe Gracedale will continue to lose money under the private management of Premier Healthcare Resources.

You might think that because I support Gracedale's sale, I think Lehigh County should sell its nursing home, too. Think again.

Cedarbrook, unlike Gracedale, has had private management for several years now. Lehigh County administrators will deny it's losing money, but it is, at least according to some financial experts who have looked at the records. But the loss is small.

Cedarbrook, unlike Gracedale, would be more difficult to sell. There are essentially two different locations, and only one license. That's a problem.

Cedarbrook, unlike Gracedale, is rated very high by Medicare and Medicaid. Four stars. They provide quality care to residents, which should be the primary concern.

Dennis Pearson is a candidate for Lehigh County Commissioner. Although I like to tease him, especially for his writing, I was very impressed by his argument for keeping Cedarbrook. I disagree with his assertion that nursing home services are a core function of County government, but wish to compliment him for coming out and taking a position, and actually making some excellent points.

Here's his essay, which I edited slightly.

We learn, not only will a private company run Gracedale nursing home, but a private company, PPL subsidiary McClure Co., will also manage $13 million in capital improvements to the aging county-owned facility.

While this is going on in Northampton County, my Republican opponents have hinted in their primary presentations and talk that they would approve the sale of Lehigh County's Cedar Brook Senior Citizen nursing home .... Which would provide only a one-time additional bulge to the County's Treasury only to be used up over time .

This is the wrong thing to do .. As it is, L W Consulting. Lehigh County's professional management team,  is already doing a bang up job running Cedar Brook ... In fact, Cedar Brook does not constitute a drain on the County Budget ... So I ask, why put Cedar Brook up for sale? ... As indicated before, such a sale would only provide a short-time benefit to the County Treasury. But the need to provide nursing home care for the aged, the sick, and disabled, will continue to exist and in the long term. Who knows what the County must do to provide for this need?


I do not favor the privatization of Cedar Brook ...The reason for Cedar Brook's success and Gracedale's financial woes is a matter of occupancy. Responsible officials at Cedar Brook work hard to keep beds full, while responsible officials at Gracedale have too many empty beds at present .. Perhaps, If they also have success in filling the beds, their financial outlook might be better... And I see no reason why they can't fill the beds.

On another issue, Commissioner [Glenn] Eckhart proposed that Lehigh County lay off employees at the Court House and at Cedar Brook who perform janitorial and lawn maintenance services and replace them with work-release prisoners from the Lehigh County Jail... Eckhart's idea is irresponsible... For one, it would cause the layoff of good people who had to pass a police security check before they could even be hired to their present jobs ... A security check that one would think the work-release prisoners could not pass ... Second --- it is ridiculous to think that we are taking jobs from law-abiding citizens in favor of those who broke the law and haven't as yet paid their debt to society...And this horrible thought comes to mind --- Would they be able to gain access to sensitive medical and Court records? And third --- Using work-release labor at Cedar Brook could become a cause of financial instability for our nursing homes in that family members might seek the transfer of their loved ones to other facilities in the event work-release prisoners are used at Cedar Brook ... And as I said, Cedar Brook currently is not a drain of the County Budget because of its success in maintaining high occupancy ... We don't want to do anything that would change this status quo.

And lastly, concerning this status quo, I am not one who whom will act like a bear or bull in a china shop carelessly rambling about and destroying the contents of the shop at will ... A role that some of my fellow campaigners may be willing to fulfill ...Yes, I have been a neighborhood activist, and have confronted politicians in the past about important neighborhood, municipal and regional issues .. But my intent is not to change the status quo unless the status quo is indeed the problem.

If Lehigh County indeed has a problem with its nursing homes, we should not tear down any bridges, or take unsupportive drastic actions, unless a better long-term solution both for the nursing home residents and long-term County interests is found... Until then, I strongly support the continued operations of the Lehigh County nursing services.

i couldn't agree with dennis more, and have been saying so for many years. unfortunately, don cunningham unionized cedarbrook with a card check that he initialized for political reasons, perhaps creating a labor cost legacy problem for the future. for now, however, the county should honor it's historic responsibility to provide care to those who need it most, at their neediest time. i have personally know people in such circumstance, and cedar brook was a g-d send. those who say that the nursing home is unnecessary, simply have new priorities. who says that buying deed restrictions for open space (mostly from people who had no intention of selling their land anyway) is any more of a valid county function? thank you dennis, michael molovinsky

Ott, Mazziotti and company want to change the mission of Cedarbrook. They wish to create a taxpayer funded care facility for those who need it most. Republicans who can't afford new boats every year. It will also be open to Wall street bankers who were forced to take bailouts. Each tenant will have their own floor, and a pool will be installed on the roof, replacing the bright Christmas star.

I completely disagree with Dennis on the nursing home issue, though I think he's right about cedarbrook. I really appreciate that he was able to make his argument so well, and without challenging the motives of those who are just as concerned as he is with what is best for the residents.

absolutely the most cogent Dennis has ever been

If Cunningham wants to keep it good. If Stoffa wants to sell it good. Notice a pattern with O'Hare. That is what happens when your positions are personality driven and not policy driven.

2:18, My position on Cedarbrook or Gracedale has nothing to do w/ Stoffa or Cunningham. It is an apple and orange comparison, and one that I made in this post. I explained the reasons why I agree that Cedarbrook should stay in LC hands, at least for now. I attended a meeting at which Tom Muller explained the difference between the two facilities.

Instead of addressing the issues, people like you are just lost in hatred. I can't help that.