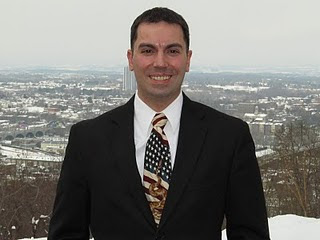 On Monday, I told you about Blogger Jonathan Geeting's attempt to smear Bethlehem City Council candidate Tony Simao with a 2007 bad check charge. No attempt was made to contact Simao and get his side of the story. Geeting never bothered to report that the birthdate is not Simao's birthate, or that Tony has a cousin with exactly the same name. Most important of all, he never even bothered to mention that there's been no conviction on what is, after all, a summary matter.

I guess the presumpton of innocence only applies to Democrats.

Investigation is not Geeting's strong suit. In fact, I'm not really sure he has a strong suit. He relies on information fed to him by Democratic operatives, and then just pukes it up on his blog, like he did to Steve Salvesen.

But I know the source of Getting's information, whether it's direct or indirect. It's none other than Joe Kelly, who just happens to be Bethlehem's DCED Director. He is effectively the second in command in Bethlehem, right after Mayor John Callahan.

Kelly made sure this information was passed on to John Blankstein, who fancies himself as the Lehigh Valley's James Carville. His LinkedIn profile tells you he's the CEO of Market Street Strategies. That's a front for a dirt-digging operation for Democrats.

Once Blankstein got the information, he made sure it was passed around the all the right people, except that one of them knew me.

Another person doing what he calls "opposition research" is none other than Democratic City Council candidate Michael Recchiuti. He was digging into the personal life of one of the candidates, and passing the information along to people like Bethlehem City Council candidate J Willie Reynolds, in hopes he could smear Simao, too. In fairness to Reynolds, there is no evidence he did anything with the information sent to him.

One of Recchiuti's emails found its way to me.

I have contacted Recchiuti, Kelly, Reynolds and Blankstein with this question: "Would any of you care to enlighten me on the smear campaign you have orchestrated thru Geeting?"

The only person who responded was Recchiuti, who attempted to justify going into the gutter.

Here's the Blankstein and Kelly email.

Why can't we see the emails?

Bernie
Think very little of Gettings.
Thanks for writing about this.

Notice what Bernie's trying to do here - he has not actually claimed that Tony's brother bounced the check. He just says Tony has a cousin by the same name. Is that his cousin's birthday? If it was, Bernie would've said it by now.

He would like to make this a story about me, to distract from the fact that NorCo Republicans put up a slate of deadbeats who don't pay their bills, and then have the gall to preach fiscal rectitude. It's hilarious.

As i said before --what an idiot Jon Geeting is--bottom line is Tony didn't bounce a check so who cares if Antonio is a cousin or brother -you tried to imply it was Tony himself and were wrong. Stay in NY and keep your nose out of the Lehigh Valley because you sure don't know what your talking about with some of your views.

I don't think the source of the bounced check has been determined either way. Stay in NY? What is this, Alabama?

So obviously Geeting is saying that it is Antonio's birthdate and Antonio did bounce a check. Big deal either way, if he did or didn't do it.

It's not like his brother-in-law slammed into a cop cruiser and tried to cover it up.

I rather trust the check bouncer.

"Notice what Bernie's trying to do here - he has not actually claimed that Tony's brother bounced the check. He just says Tony has a cousin by the same name. Is that his cousin's birthday? If it was, Bernie would've said it by now"

Geeting, No, I am not accusing Tony's cousin of being the person who bounced a check, assuming that a check ever actually bounced. And the reason i make no accusation is becasue I NEVER SPOKE TO HIM AND GOT HIS SIDE OF THE STORY. Unlike you, I do not make charges of criminal behavior without at least trying to get the other side of the story.

It is not a story about you, although your shoddy journalism should be noted. It is a story about a concerted effort to smear Simao coming from Callahan's right hand man, in which you play the role of useful idiot.

It is funny he can talk about other's and bad checks but last night he was appailed that Mr. Barron brought up that subject with Mr.Salvesen.
What is good for the goose is good for the gander. Bernie

I wasn't appalled. It was the moderator. I will bring up bad checks if it is part of a pattern. i will not bring up one instance in which someone is complaining about a bad check, but does not even have a judgment.

Also, Barron should not take credit for being a lawyer, as he did last night, when he failed the bar and has never been admitted.

The bodies of the emails have been left out of this post because I do not want to give the smears any traction. But I reproduced the headers to let the Callahan machine know that I have them and they better clean up their act.

Bernie, lack of research is a hallmark of Geeting's website. It is literally riddled with errors. When called on it, he acts like a petulant immature child and refuses to acknowledge mistakes, correct the information, or apologize.

His 'analysis' wouldn't pass muster in high school. He is incapable of asking the question "why?" when given a statement, he stops at the surface and draws conclusions. I learned back in the 1970s that this was called "elevator analysis" and that people who could only do that were often fired for incompetence.

It's a shame to see a kid who thinks he's contributing, actually being used as a puppet.

I do hope he grows, matures, and becomes a contributing member of society. But I wouldn't get my hopes up.

This is a rough and shady crowd. They are sadly the future of Lehigh Valley politics.

It would be a little difficult to get Joe K or John C to comment-according to the gossip chain in city hall,they are both in Saudi Arabia "studying the school system"....did I miss something?, when did they rule over BASD? It's really too bad too-Joe used to be a good guy til he started hanging out "Mr Kamikaze"( his drink of choice when he's trolling the bars of Bethlehem looking for his friend Alicia )

I will bring up bad checks if it is part of a pattern.

In other words, I will bring up bad checks if it hurts a Democrat.

Why are they going after Tony so strongly? Wonder what Callahan and his lackeys are afraid will be found out if these guys get elected.

Can you imagine a city council that isn't stacked in Callahan's favor?

I think it's time to clean house.

This is non-story unless you include the bodies of the emails. What is it that we aren't allowed to see?

all dems on council are scum ball rubber stamps but the citizens are too stupid to get it. a sad statement of our population. they are getting screwed without lube and don't even know they are being raped. they deserve what they get

Actually, before overdraft protection, it was easy and common for just about everyone to bounce a check now and then.

OM Bernie Guess who made Drudge!

"A welcome home party for a teen released from juvenile detention resulted in gunshots and stab wounds for five people at the party.

The congratulations-for-getting-out-of-juvenile-detention party occurred on the 500 block of Hess Street in Bethlehem Saturday night, police told the Morning Call.

Reports of gunshots in that area brought police to find two people with stab wounds from a huge brawl that erupted on the street during the party. Police brought the two wounded to St. Luke’s..."

Wow! is this the same Joe Kelly who has his eyes on the mayors office when John C moves over to Northampton community college?

Maybe thats why he is studying the saudi education system. Can you say burka?

Why are Kelly, Callahan, Recchiuti, and Geeting so afraid of these guys?

They must know where all of the bodies are buried if the Callahan regime is going after them like this. Didn't Recchiuti say he's "not beholden" to anyone? I'm going to throw the B.S. flag out there on that statement. Looks like these guys are all serving one master...

I always though Joe was a nice guy. He got pulled into the wine, women and easy money world of the Johnny C crowd. It's a shame to see how this crew gives political leaders everywhere a bad name.

"This is non-story unless you include the bodies of the emails."

25 comments on a nonstory, eh? If you'd like to see the body of the emails, ask Joe Kelly and Mike Recchiuti. Their email addresses are listed.

well, to be fair, many of the comments appear to be from the republican slate, or their immediate lackeys.

Bernie, Responsible coverage of this issue would be to include the body of the emails and you know this. What would be your reaction if someone else posted this without full disclosure of all info?

Most the comments here aren't even about the emails. Let the public judge the merit of the "smears". Otherwise either there is nothing to the story or you helping hide something.