Invasion of the Anti-Soccer Moms 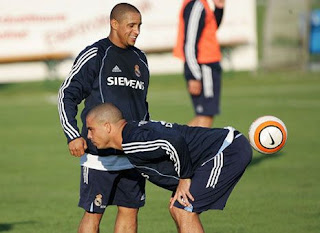 They complained to police to no avail. So on October 3, a group of Bethlehem Township residents marched into the Municipal Building and demanded Commissioners to do something. Kathy Vaught even presented a petition signed by 45 people who live in Bethlehem Estates, one of the Township's swankier neighborhoods. As she spoke, several of her supporters shouted out from the peanut gallery.

What has them all up in a lather?

These young ladies, and some of them are even younger, play soccer with Lehigh Valley Magic every Saturday at a 6.59-acre park nestled at the end of Anthony Court in Bethlehem Estates. There's a small parking lot at the park, and those unable to fit in there are forced to park up and down the street.

It's a situation you see every weekend in many Lehigh Valley neighborhoods, especially the landlocked older boroughs. And guess what? The people who live there love it! It's what makes a neighborhood a neighborhood.

Vaught told Commissioners that before spending over $700,000 to buy her home, she was concerned about the small park located next to it. She was assured it was for open space. "If I had known that 150 people are going to be there every weekend, I never would have bought," she complained, adding that "the noise is absolutely ridiculous on weekends."

Perhaps Vought would prefer the open space brought by a heavily-manured cornfield, especially when the wind is blowing her way. How about a skatepark frequented by kids with purple hair, piercings and tattoos? I doubt Vaught and her $700,000 neighbors would have to worry about all those bothersome parents. 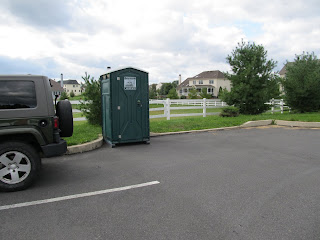 Vaught is particularly troubled by a portable toilet located in the the small parking lot. Apparently, little girls who play soccer occasionally use a toilet.

As a result of her own investigation, Vaught learned that the Township only charges $20 per week to rent the field. She told Commissioners that was a ridiculously low rental. "If the Bulldogs [a youth football program] get a hold of something like this, I don't know what will happen."

Township Manager Howard Kutzler explained that an arrangement was made with LV Magic for one team of 11-and-under girls to play at that pocket park for one season because they were too late for the main soccer fields on Farmersville Road.

"It does saturate that little area," remarked Commissioner Tom Nolan, referring to the parking situation and not the use of port-a-potties.

Maybe the rules are different for people who live in $700,000 homes and wealthy neighborhoods, but isn't a park intended for the public? Is the laughter and screams of 11-year old girls, and the cheers from their parents, all that annoying? One afternoon a week? Shouldn't we encourage our children to engage in this kind of healthy activity, even if it is next to a $700,000 home?

That's hysterical, Bernie. This "lady" should be sentenced to volunteer in East Allentown in one of "those" neighborhoods where the kids from meager means come to play on a shoddy field with uber used equipment and where there isn't ANY parking. Like you said, thats what a neighborhood and community is, but people who live in 700k houses will never understand that. And for Tom Nolan to actually encourage this idiot is laughable. So according to Mr, Nolan we don't need libraries for kids and kids shouldn't be allowed to play in parks....gotcha.

Nothing wrong with the aroma of a manured corn field. Beats the smell of gunfire and crack smoke in Easton or Allentown.

I do declare Mr Ohare
That story gave me the vapors.

For a woman who can afford a $700,000 house, Vaughn seems pretty stupid. Who wouldn't have visited the neighborhood several times at all hours of the day to get a "feel" for what takes place. Do Your Homework Lady.

Well, if the park is going to host soccer for one season only, then there's really no problem - this is temporary. But, if the soccer schedule returns teams to this field next season, the lack of parking is troubling. It really isn't acceptable to plan to have teams visiting a site without adequate parking or plumbing, and I would also be upset at a permanent port-o-potty on my street. I love the noise of soccer - I hear it all weekend every fall and summer - but accomodations must be made for parents and kids that are more appropriate than what this neighborhood has. The potential consequence of her complaint, however, is township spending on plumbing and parking - is she sure she's willing to take that risk?

An extra porta potty is a great neighborhood asset. Some folks even place candles and flowers in theirs.
Besides, now when Vaughn invites her friends to a dinner party, they know what to bring...tp.

Well, I guess the soccer league can use the $20 for the girls' bail/rehab in the future instead of using it to promote exercise, manners, sportsmanship, etc...

Is it really a park or leftover land from the developer that needed to be part of a payoff for something overlooked in zoning?

can you spell snouty bitch?

On point on this one, Bernie. I don't say that often.

How terrible. People are parked on her street!

Sports, sports , sports, sports! What the heck ever happened to school sports ? Now there has to be a league for every garden variety kid in every single town, weekends and all? I'm with Vaughn on this one. Maybe if parents would allow academics to be the main focus.......none of this ever existed when I was a kid..sports were school sponsored and took place on school property, paid for and maintained by taxpayers!

But many schools are stopping their support of these athletic programs as Bethlehem recently did with middle school soccer bc people in $700,000 homes are outraged by all the tax hikes.

So we should probably end all these programs.

In fact, maybe we should send all our kids to Mexico or Africa to be raised.

"Is it really a park or leftover land from the developer that needed to be part of a payoff for something overlooked in zoning?"

It is really a park, originally owned by the developer, and dedicated to the Tp.

Monkey Momma, Your concern about the impact of parking is valid. This is at the end of a cul de sac and does impose on the neighborhood. But that happens all the time in borough and City neighborhoods. That's what it means to live in a community. Your concern about plumbing, however, is overblown. There's no reason to extend plumbing and install permanent restrooms in a small park. The Township would never do it. As it is, it will probably take them 10 years to install rest rooms at 55-acre Housenick Park, where they were bequeathed $2 MM. They might not do it at all. These teams bring in the portable johns during their season and then take them away.

Classical suburban mindset. Complain about big government and too much taxes and then run to a public meeting and demand action when people park their cars on the street for a soccor game. Why not relax and get out of the house and go watch the kids play. The extra parked cars might make the traffic slow down and your street will be safer.

Completely untrue, "none of this ever existed ... sports were school-sponsored" etc.

The school soccer season is only in the fall. In middle schoool, the season was only six games long in Allentown. But soccer is a YEAR-ROUND sport, IF you expect to end up in Division I --- like me.

I am told the New England state university I went to has an outstanding reputation for academics. I would not know. I'm just a jock, you understand.

I WAS on the borderline for admission requirements ... but the rest is history.

If you state your name publically, Anon 9:28, I will then state my name publically ... I will also provide the name of my college coach (who actually had a stint as the head man at Lafayette College in Easton once upon a time) to allow for story verification.

"These teams bring in the portable johns during their season and then take them away."

Well, Bernie - I wouldn't take this whole soccer protest thing as far as Vaught. BUT...a port-o-potty and tons of cars on a cul-de-sac really does change the character of a neighborhood. I can totally understand her point of view.

It really sounds like whoever told her the park was "designated for open space" needs to be held accountable. But, if I know real estate agents trying to sell $700K properties, that was something never documented and therefore unable to be proven. Hearsay. Too bad for Vaught. Vaught shouldn't'a bought, I guess.

That said, I live next to one of the largest parks that hosts soccer games and practice in the valley, and I love it. It IS noisy, but only during daylight hours. I am just glad there are proper plumbing facilities and proper parking accomodations - it is NOT acceptable for parents to park on my street, and the cops here are very strict about enforcing that rule.

Yeah. Like when Walter Cronkite, James Taylor and the Kennedy drunks complained about the unsightliness of a proposed wind farm off their palatial compounds on Cape Snob. Limousine liberals have lots of little assholes carrying their water for them.

Monkey Momma, The games are held once a week on Saturday afternoons. The portable john is in the park's parking lot, well away from Ms. Vought's $700k home. But it is a small parking lot and there is no room to park except on the streets outside these homes. I could understand that this does create some temporary traffic issues. The Township made the park available to accommodate the team, many of whose children are Township residents. It's for this Fall only. Next year, they'll be on the main field.

$25 to your favorite charity if I'm wrong and this bitch is not from Jersey.

Really, was the Bitch from Jersey comment really necessary? I am a proud Jersey Girl and love it here in Pa. but some people here are not so welcoming...

I hate to generalize, but that's been my experience as well, Jersey Girl. And I'm only from NJ via moving from Florida!

M Momma, you have the right to stop citizens from parking on a public street in front of your house???? WTF????
S

You have a lot of nerve criticizing a property owner who god forbid doesn't want 150 screaming people near her home . I don't care if her house cost 700k or 7k . This field was never intended to be used as a soccer field. Why don't you use one of the many soccer fields at the township park which are real soccer fields. Also don't paint yourselves as poor victims from the inner city. You are an exclusive soccer club which charge a lot of money for the privilege of playing and training. Go rent proper facilities!!!! I live in this neighborhood and coach youth sports including soccer. I agree with my neighbor. We are not anti-soccer we are anti-noise and traffic. Most of us living here are dedicated to youth sports and volunteer often at the soccer fields, basketball courts and baseball fields, we just don't want to live near them.

Yes, I do have a lot of nerve.