What The Hell Does Geeting Know About Angle's Regionalization Views? 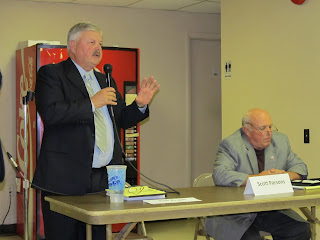 Blogger Jonathan Geeting attends no municipal meetings, but likes to act as though he was there. Now he's misleading readers into thinking he was at the County Council debate between Ron Angle and Scott Parsons on Tuesday night. That's par for the course from him, but what really gets me is that he is also misrepresenting the views expressed by the candidates at a debate he failed to attend.

Take the concept of regionalization. Scott Parsons did state he'd like to see a County-wide police department. So would I. So would most people. It creates efficiencies and leads to more professional departments. It is a good idea, and I say this as someone who supports Angle.

Angle does believe in regionalization. He helped create a program in which the County and Townships pool open space money and get a larger matching grant from the state to preserve farmland. Moore and Plainfield Townships were able to preserve farms they could never have funded any other way.

When first elected Council President, one of the first things he did was sit down with Dean Browning, Chairman of Lehigh County's Board of Commissioners, and began discussions on identifying areas where the counties could work together, from laundry service at the nursing homes to work release. Lehigh County Exec Don Cunningham, in his 2010 State of the County, praised them both for their willingness to sit down and work together.

But unlike Geeting, Angle does not support regionalization just for the sake of regionalization. Since he feels that a public health department is too costly, it makes little difference to him whether one or twenty counties want to participate.

And with respect to countywide police, Angle had a one sentence remark. "It's not going to happen," he said. And it's not. Not in his lifetime. Not in my lifetime. Not even in Jonathan Geeting's lifetime. There are too many parochial forces at play, and to many police officers feel threatened by the idea, often for good reason.

Angle is just being realistic and honest. As he said in the debate that Geeting never bothered to attend, "I won't tell you what you want to hear. I'll tell you the truth."

That's something Geeting should try. If he fails to attend a debate, he really is in no position to sound off about it. Yet not only did Geeting hold forth, but completely misrepresented Angle's views about regionalization.
Posted by Bernie O'Hare at 10/20/2011 01:39:00 AM

How do you know Geeting wasn't hiding behind Jumbotron's skirt?

Angle doesn't support a regional police department. Parsons does. It's that simple. You can't make any progress on this stuff if you don't elect people who want to try. Nothing is impossible. You just have to elect people who actually want to do it, and that's not Angle.

My traffic is surging with all this Geeting blogging you're doing, btw. Keep it coming!

Hey JobJonny. It will never happen. We can't get 2 towns to merge depts, let alone the whole county. You are in space my little friend!

Parson's doesn't seem to know what day it is. I'm not certain he can pronounce regionalization. After his fumphering performance the other night, I call bullshit on any claim that Parson has a coherent position on anything.

So let me get this straight. You can never comment on anything political unless you receive your information live and in person at a debate? You are really delusional.

But no one comments on Geeting's blog.

Hey Junior, ever think the traffic is surging there, kinda like the traffic always slows down to see the train wreck?

"You can never comment on anything political unless you receive your information live and in person at a debate? You are really delusional."

What I am saying is that Geeting is dishonest. He has no business stating Angle's position on an issue during a debate when he was not there and the only account he could have read at the time of his post is my own. Not only does Geeting mislead his readers into thinking he was there, but he misstates Angle's position on regionalization.

And as far as your traffic goes, Jonathan, you'd have more if you tried to be honest with your readers.

bernie, a side note, if you will permit. although i have no knowledge of the candidate positions, i disagree that a blogger should limit posts to only meetings that he/she attends. you function uniquely in this blogosphere as a journalist, with much more energy than even your paid competition in the MSM. most of us other bloggers, if you will, are columnists, at best. some of us may have more involvement and insight than others, but none of us attend countless meetings as you do. your viewership is richly deserved, but blogspot would close down if every blogger had to follow your strict guidelines.

In Geeting's case, he attends no meetings, but writes about them from Manhattan. And it is clear by now that his interest is not the truth, but propaganda. He took information from DCED Director Joe Kelly and political consultant John Blankstein, and use it to try to damage Tony Simao, making several incorrect assumptions about it and making no attempt at all to get his side of the story. He took other information supplied by Democratic operatives and used it to slime Steve Salvesen on Patch, making no effort at all to get Severson's side of the story or to determine if the information supplied to him is accurate.

This is shoddy journalism. It is actually worse than that. It troubles me bc Geeting has no interest in telling the truth - his primary mission is to hurt any Republican seeking office.

When I take him to task for his dishonesty, it seems that his sole concern is how many hits he is getting.

We all have agendas. I have mine. You have yours. I do not believe you would ever let your agenda get in the way of the truth. I believe that is where bloggers like you stand apart from Geeting.

There are other bloggers who let their agenda rule them, and the truth is ignored. Geeting is headed in that direction.

I should add that i don't give a shit what he does, but will defend against what I know are outright lies.

There are some shared services benefits to regionalization. Like the Regional Crime lab. I think that ended up as go it alone effort by LC though. I could be wrong.

Then there was the LC compost facility. It was my understanding the decision was made without consulting municipalities (Albeit there was talk thereafter). While composting is not a core function of the County, it was a service that had benefit to taxpayers.

When and if there is cost savings to the taxpayer, there is value in considering services that may not necessarily be considered a core funtion of a govt body.

Talks of water Regionalization were too political when it disregarded viable providers who were already regionalized.

I still like how LMT has regionalized their police protection. Every PA taxpayer pays for it.

Please do not make fun of the way Scott Parsons talks. After years of listening to Ron Angle mangle the English language and syntax, you really don't want to go there.