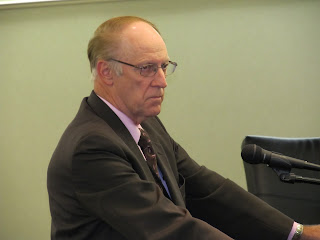 Northampton County Executive John Stoffa loves debates. In last year's Congressional race between John Callahan and Charlie Dent, he attended more debates than I. But you'll also often see him at candidates' nights for municipal offices, sitting quietly, but listening intently to every word said. But he was strangely absent from Tuesday night's "Debate at the Slate," featuring the Steve Barron, Steve Salvesen Controller's race, as well as the Ron Angle, Scott Parsons County Council Clash.

Steve Barron must have noted Stoffa's absence as well. When asked to explain why he went to the EPA about asbestos at County buildings, he blamed it all on Stoffa. He claimed that Stoffa told him, over lunch, to keep his mouth shut about asbestos because it might have an adverse impact on Gracedale's sales price.

I caught up with Stoffa yesterday. Instead of going to the debate, he was in Allen Township to argue for a referendum there on open space, which was adopted. "The open space will be there long after Barron and I are gone," he explained.

When I repeated Barron's accusation, he became visibly upset. "That's a bold-faced lie. I've never hid anything about asbestos. In fact, I've spent over $1 million on inspection and amelioration."

He did tell Steve Barron that. This time Stoffa is caught. He was unaware of a witness.

Brron is the biggest piece of debris to float into Easton in a long time . He is a liar from the get go and will end up being a bigger one at the end of his downfall.

Still time to make up lies?

That's one of three terms used. I used the term that Sotoffa stated bc my job here is to repeat the term he used accurately, not replace it with my own version.

"When we call a lie baldfaced or boldfaced ... either one is just fine, though baldfaced is a bit more common. But we could save ourselves trouble by following the rest of the Anglophone world, which avoids the issue simply by using barefaced for most kinds of openly shocking behavior.
Jan Freeman, writing in the Boston Globe in June 2002."

Anonymous 3:46AM
And despite the response by you as anonymous we should believe you were there. FUNNY

Bernie I have heard you spend alot of time in the law library. Are you worried about the asbestos problem?

No, but I glow in the dark now.

barron and Stoffa were eating lunch together and sharing confidences? Oh yeah,I saw them too...they were right next to Ron Angle and Ann McHale who were sharing a milkshake with two straws.

You want to hear the conversation

Oh, now you're claiming to have a tape. Produce it.

Stoffa wanted to cover up the asbestos problem. he claimed he was working on it. If that was the case what did he have to hide.

It must have been the secret Stoffa plan to fix the asbestos problem.

Thank god for smart county employees and autopilot. The Stoffa gang don't have a clue.