I gotta' tell you, when I watch any one of these videos being produced by Tony Simao, I feel like I'm at the Carmike. In this one, Bethlehem City Council candidate Tom Carroll is portrayed as a Deus ex Machina who suddenly swoops in and saves the Christmas City at its moment of greatest peril.

He's Garbage Man, grandson of a garbage man and son of an Air Force major. That gives him his super powers.

All he needs now is a cape and a garbage truck that launches sidewinders.

All this makes me wonder about the remaining five candidates, and which super heroes (or villians) they remind you of the most. 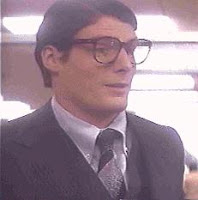 Mike Recchiuti: Tuesday night, with the glasses, he had a bit of that Clark Kent look.

Bob Donchez: If he let his hair grow another two feet, wore a rubber muscle suit, and lost the glasses, he could probably pass himself off as Thor, God of Thunder. 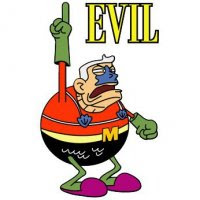 Al Bernotas: Mermaid Man, to be sure. When he sees a zoning hearing board, he shouts, "Evil!". 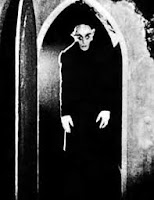 Willie Reynolds: With the shaved head and long hands, he's got a bit of that Nosferatu look. Come to think of it, I only see him at night. 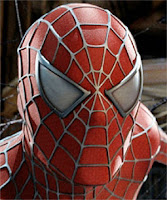 Bernie
Not sure how you could do this, but it sure would be interesting to find out how the Call's new pay up folks digital program is doing. According to Pew Research, Americans do not like to pay for digital news.

Bernie
Forget Tom, what's a bigger picture is the scandal taking place in
Center Valley and ports beyond. What happens if this huge taxpayer-funded investment closes?

Ah the "Job Creators". Carroll says the Job Creators lack the confidence to invest in Bethlehem? That's the real garbage. The number of new businesses that have opened in the last two years is actually pretty shocking given the non-recovery. Here's Lynn Olanoff on all Bethlehem's new young women business owners.

Also, the GOP Slate is definitely the Cinnamon Toast Crunch Bakers. Check it out. Tony Simao is the skinny one, Tom Carroll is the fat brunette, and Al Bernotas is Wendell. It's a fun reversal of real life, since the Carroll and Simao characters eventually got booted from the Baker Slate with no explanation, whereas in real life that's what happened to Al Bernotas.

Jon Geeting would be Clifford C. Clavin, Jr. from Cheers.

Know it all that is anoying and does nothing but talk out of his sphincter!

Jon Geeting, Sorry dude, but your humor is lousy. Being aimed at just one side, it is mean-spirited, too.

I am highly offended!

This is Jon Geeting!

Willy is a rubberstamp for Callahan. He is fed questions to ask during meetings. All the illegal transfers in the last 2 years came under his watch as Finance Committee Chairman. His no tax vote was meaningless and calculated and should offend Getting. So, the fact that he is ugly and bald isn't the issue. He isn't being honest with anyone abut anything and should tell every one of his plans to run for mayor in two years.

Mikey R. lost his job and is unemployed. He took $4,800 from Callahan after he lost 2 years ago and then was appointed to the Parking Authority. He now wants to hire lawyers to go after people having trouble paying their taxes a as a way to build revenues in the city. He will be nothing but a rubberstamp for Callahan. So, it doesn't matter that he is fat and c can't finish a sentence without the word um.

Bob Donchez is likeable but has sat there for 16 years watching the deficits grow, the borrowing skyrocket and the police force shrink. Only now that people are running against him does he call for zero. He isn't ugly or fat, just an old white guy who wants to be mayor.

What they look like isn't the issue. What is the issue is that Willy and Mikey are bought and paid for by the major and are arrogant and now running as more conservative then the Republicans and the only recent accomplishment of Donchez is a "lock box" and now is also running as a conservative saying we need a zero-based budget. Why now Bob? He swears he won’t vote to allow that money into the general fund. But what about the other account (Casino revenue protected by the so-called Lesson Amendment)? What are Bob and Willy going to do right after the election faced with an administration request to transfer money to cover payroll which it won’t be able to make at the end of the year, just like the first payroll of last year?

Like it or not one one of these guys will likely be the next mayor. You must never forget that the voters of Bedlam are "special" God Bless their hearts.

Tom and Tony must be worried. The personal attacks seem to be more vicious today. Willie, Mike and Bob will easily win. Too many D voters.

you got home pretty fast from the debate today.

The Administration is in court fighting several small business owners right now. Talk to people like Deli owners, Salon owners and some of the other businesses that have closed up on Main and Broad Streets over the last year or so.

Ah, yes, fairly clear that KK likes to tweak. Just like we all know when it's Kelly, your comments are easily made out. Funny how you call yourself the most conservative Democrat anyone will ever meet and funny how you stated publicly that you don't like public sector unions and you only support private sector unions. I wish you had the intestinal fortitude to say it to your supporters.

Kelly, Seamus, might as well be the same person.

Uh....no I'm not Kelly I'm sure Bernie can prove that. Every time I return to this blog to catch up on the current slant it gets funnier.

For the next movie how about some nude shots.

And it seems my original message Bernie was true. I hope you plan on writing about the article.

Seamus, Your original message consisted of a claim of a bad check and a claim concerning Simao's lifestyle. The bad check charge was, as I told you then, false. The other charge is irrelevant. I find it highly hypocritical that the very people who were so sanctimonious about the human rights ordinance would stoop to this level. And don't say it is about Tony's poor judgment, bc it is not. You would need to know all kinds of things to discover his participation in a gay community.

Stop deflecting. You wondder why everyone calls you a hypocrite. This is a good example.

By the way, your assumption that all gay men show their junk online is homophobic in and of itself.

The reason I didn't want to do a full coart press on this is because it is really irrelevant the 3 Rs have no shot anyway so why start a fire where there is none. This only brings attention. Problem is the emails about it got around too much. Hell I recieved it at least eight times from different people

I know exactly where it comes from.

So where exactly did it come from Bernie? Or are you just blowing hot air? People want to know.

you’re not the only one, doesn't negate the facts though. Unfortunately people got way over zealous with the information.

Hey Seamus, you have any nude pictures of your junk online?

Seamus recieved the email 8 times, isn't that the same # of times Wee Willy stated in his response to the story that he had recieved this email?

No Blankstein I don't need photos....is your wife sharing again?