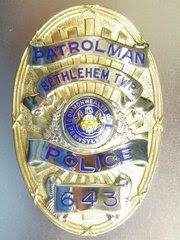 At their October 18 meeting, Bethlehem Township Commissioners unanimously approved a new, four-year contract with its 31-person police department. It's based on an arbitration award released in August.

Under the new contract, police officers will see no raises next year, but will begin contributing to the cost of their own health care insurance. In 2012, they will get a 2.75% raise, followed by 3% raises in 2013 and 2014.

Police officers will continue to contribute to their own pension plan, and in increasing amounts over the next four years. They are eligible to retire at age 50, with 25 years of service.

In addition to the annual $550 uniform allowance, the Township will provide a pair of pants and a shirt for each uniformed patrol officer each year.

"The Township thinks it's a fair arbitration," stated Assistant Township Manager Doug Bruce, who was involved in the negotiations.

This gets a little deeper than rehab vs. BECAHI. This is more about Baptists vs. Catholics and the "graven image" thing in the Bible. Baptists (very to the right protestants) have some serious issues with the Catholic religion. Burds comment smacked of total disregard to Bethlehem Catholic. Imagine if Atiyeh proposed this next to the spanking brand new budding Calvary Baptist in lilly white Bethlehem Township!!! Mr. Burd would be having a fit. His talk of loving and gospel would fly right out the window. They would be massed trying to stop this. This comes down to lack of respect by the Baptist church toward the Catholic High School.

whats this got to do with over paid cops with too many benefits? anon 6:35 will be ok as soon as he/she/it takes their meds

Looks like anon 6:35 posted in the wrong blog piece.

Do they get a Donut stipend?

Some departments contribute 100% of the cost of your basic glazed or Boston creme, and regular coffee, but have successfully negotiated a required employee contribution for bagels, muffins, coolattas . . .

Who says our elected officials can't play hardball with their unions?

not do casual observer said...

Police pay is far less in both salary and benefits than teachers pay. These days most police have bachelors degrees, act 120 training and constant ongoing training. Teachers work 180 days a year, 6 to 7 hours a day. Snow days,etc. Police work is a minimum of 8 to 10 hours per day a minimum of 250 days per year. Sonw days , disasters they don't stay home :they don't get to go home, they deal with violent criminals and domestics. Polce work in dangerous situations They work nights, weekends, holidays , kids birthdyas, soccer games missed.Missed family meals, days off spent training or in court testifying.

They must be trainer first responders too, They must go into dangerous aeas and filth we can not imagine

Police are held to scrutiny of moral ethical and personal standards that no one in the private sector must maintain. and here is the big difference, they can be fired if they don't do their job.

Before you call them overpaid, live their life for a year. and don't forget your kevlar.

not do casual observer said...
"Police pay is far less in both salary and benefits than teachers pay."

To wrongs don't make a right.

Trouble is, in the public sector, everyone is deserving of the highest pay. Just ask them. They all will tell you they must have the money to attract the best and brightest: Teachers, school administrators, football coaches, cops, firemen, county department heads, social workers, clerk typists, gracedale goons, dmv clerks, legislative aides, etc.

All tell you the world will end without them.

And, then, you interact with them, and learn the truth. For every hero cop or teacher of the year, there are many more donut eaters and trough feeders who do the absolute minimum, or less. Can't return phone calls, or spell, or even communicate among themselves. Speak to those who pay them as if our next breath is dependent upon their good will. Yet, still they see raise after raise and receive retirement and medical benefits far beyond any their average benefactor could hope for. They benefit from Federal, state, and local borrowing far beyond the ability of any future generation to repay.

Too many asking for too much. The bubble is bulging, and it will, at some point, burst.

Maybe, if we get what we pay for, we might be a little more sympathetic.

Where are the Tea Party asshats? Oh they're here.

nobody drafted them. most are arrogant ot grabbers. bnig gun, little dic.....