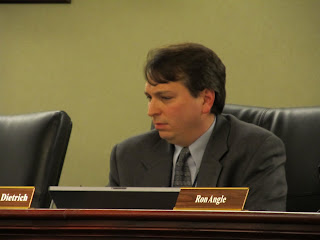 Two weeks ago, County Council unleashed their Bulldog, Ron Angle, to take on Charlie Chrin and squeeze some concessions for the Route 33 Interchange TIF at Tatamy. Tom Dietrich, who has been on Council for two years now, is one of the persons who agreed with this idea.

Last year, Angle was able to talk Bethlehem Mayor John Callahan into renegotiating an Artsquest TIF, resulting in $5 million in more money for taxpayers than originally planned. And with the help of Executive John Stoffa, he was able to persuade Charles Chrin to agree, in principle, to kick in $2 million for farmland preservation, effectively wiping out any loss in greenspace from both the Interchange and Chrin's planned industrial park.

You might think Angle is the Devil, but this is a "good deal," as Council member Mike Dowd aptly noted. I doubt that any member of that Council, other than Angle, could have pulled it off.

Most of Angle's colleagues on Council detest him, so as good a deal as this was, only two of them could bring themselves to acknowledge his work. That's OK. He does not work for them, but for you. All but one had the good sense to recognize that this is beneficial to the County.

As Angle was telling fellow Council members what had happened on a mission that they themselves had unanimously authorized, Dietrich smugly began scribbling a note to Council member Ann McHale.

What Dietrich should have written is this. "I am a petty and mean-spirited little weasel who can't stand the fact that Angle succeeded in doing something that I could never do in a million years, even if it benefits the taxpayer. So I'll stick a knife in his back just like I did last January."

Of course, Dietrich declined to produce the note when asked because he's a coward unable to stand behind his own words. But its content was seen by others.

Later in the meeting, Dietrich demonstrated that, in addition to being a coward, he's an idiot.

Council was considering new digs for District Judge Gay Elwell at 400 Northampton Street. Dietrich suggested that, to save money, the County should stick all of these judges together at some central building. Of course, this completely ignores the fact that a district judge's courtroom MUST by law be in the magisterial district he or she serves. In the world according to Dietrich, if you were stopped for speeding in Roseto, your trial might be in Hellertown in the Castle of Mini-Judges.

After two years as a Council member, this is something he should know, but he doesn't.

Now I can forgive idiocy, but detest cowards who allow petty jealousies to interfere with god government. If I sound irritated, it's because I am, but I sign my name.
Posted by Bernie O'Hare at 10/07/2011 12:42:00 AM

Oooweee, sure, he's a jerk. But, I don't recall you ever pissing on anyone this hard. What's up with that?

Dietrich had the nerve to think for himself instead of deferring to Angle like the other bobbleheads. That is what O'Hare detests.

Unless names are provided as to the content of the note, you version is heresay.

" I don't recall you ever pissing on anyone this hard. What's up with that?"

"Unless names are provided as to the content of the note, you version is heresay."

Ask Dietrich why the little wimp could not own up to what he wrote in the middle of a Council meeting, when they learned they had just preserved 650 acres. He's a little piece of shit who does not belong on Council or in any elected office, for that matter.

Why must Stoffa always have Angle in these deals. something stinks with these two guys.

Yeah damn that Stoffa and Angle, always looking for ways to improve the county without reaching into my pocket. Farmland preservation is critical to our area. Developers for years have been asked by municipalities to contribute. What is sad - is no one else thought to pursue it. As to Dietrich - does he think he's a 12 year old, passing notes and not wanting the teacher to read it. Grow up!

And O'Hare is a huge piece of shit.

Have you not learned your lesson about defamation? I guess the recent letter you got swayed you enough to remove posts, but it looks like you're at it again

Dietrich doesn't really have the ability to think for himself...He is a peacock without the nice tail...

" I guess the recent letter you got swayed you enough to remove posts, but it looks like you're at it again"

I've removed no posts, have received no letter, but am actively working on something of my own for a few deserving people. Stay tuned.

Tom Dietrich unlike Dowd and the other ass kissers on County Council are not afraid of Angle. Good for you Tom. Don't let the O'Hare freaks deter you. Dispite these last minute antics by Angle and Stoffa, Angle is gpoing down in November.

You should run for Preisdent of County Council. Most people have questions as to why Stoffa and Angle needed this "closed door" meeting. We all question what those two really were dealing.

Tom Dietrich is a coward who actually was unwilling to stand behind his own words. Seems to me that he is terrified of doing anything openly, and instead prefers to slink around behind people's backs or writing secret little notes like a grade schooler.

You'll support him bc he detests Angle. But as he slinks around Angle's back, he's also slinking around yours.

Bernie is that worst then writing secret wills?

Trying to follow the logic, this was a 'secret note' that others were allowed to see?

Or is bobble-head spying over McHale's shoulder?

Instead of giving a tax break to a gazillionaire, how about charging him the taxes he shoudl be paying like everyone else? Maybe the tax revenue could be used to fix dilapidated county buildings.

The $2 million deal is not legal. Its $2 million in exchange for a TIF tax break. If the TIF gets a "NO" vote, what happens to the 2 million? It goes away?

It is a bribe and I'm glad Deitrich realized it

Sorry Bo, youre a huge hypocrite. You're the first to shout down "pay to play" schemes and here is one right in front of your face.

But when it involves angle the angler, he can do no wrong. I Hope TIF fails

Dietrich is a girl. A very stupid little girl.

Great point. This is a case of blatant "pay to play". We give you a tif if you give us $2 million.

The DA should be contacted at the stae level. This isn't the first mudpie that Angle/Stoffa have baked. They are disgusting.

Yeah, real brave picking on little Tommy.A little girl. And empty tin can. A little shit. Real grown-up observations from the dredges of the blogosphere.

If thIs is a bribe, then all 9 members of Council need to turn themselves in. They all, including Dietrich, authorized Angle to do exactly what he did.

The TIF and this agreement will be done separately,

Angle and Stoffa negotiated a deal that benefits every person in the community.

Pay to play and bribery both connote some kind of personal benefit, but this was done to benefit the taxpayer, which will now have 650 acres of farmland that
They did not have before.

Since Dietrich seems to think this is some kind of illegal bribe, I expect him to report to the prison immediately, because he authorized it.

What Dietrich was really doing was taking his usual petty jab, which he refused to take responsibility for, like the little coward he is.

Bernie, Angle is good at getting other farms in farmland preservation but not his own.
I wonder why?
And lay off Tom .
And I have a guestion for you maybe you can find this out.
The word on the street has it that Angle is meeting with the fake Rev. trying to be saved. Wow that is a turn around.
Let me know if you hear anything.
Iam not signing my name but you know who sent this.

Yeah, I know who sent it. A Gracedale Goon. You spew lies incessantly and all I can tell you is that your day is coming, and you will not be very happy about it.

Tom Dietrich, like you, is a coward unwilling to take responsibility for his own hateful words. Like you, he is good at slinking around behind people's backs, with twists to the truth or outright lies.

Angle has met the Fake Rev and has told him that if he actually goes to a seminary and gets ordained properly, he'd help him. Like me, Angle wonders how someone who claims to be a man of God can be so hateful. Unlike me, Angle reaches out. I realize it is a waste of time and have told him this from the beginning.

Angle is representing the County, and part of his job on the farmland preservation board is recommending farms for preservation. If you don't like that, pull Parsons out of Detzi's Tavern and have him knock on a few doors.

Tom Dietrich is one of the few independent county councilmen around. We supoort you Tom.

omg bernie, lay off tom, he is a very nice guy!just because he is nice looking and a caring individual you are jealous!give him a break.. he isn't even up for election.... go parsons! we need him... go werner, we need him, the county will work much smoother! and yes i'm remaining anonymous!

oh BERNIE!!! you missed out, the gracedale gang was handing out leaflets today! where were you???? we missed you!!!

You have all been secretly videotaped and the tapes will be turned over to the Angle/Stoffa regime.

You go on Tom we are behind you. Anyone Angle, Stoffa and O'Hare are afraid of is a friend of the people.

We know about the leaflets.

No one escapes the eyes of the Bobble-Snitch!

In 2009 I was proud to vote for Barbra Thierry. Theirry has been a real disappointment. I didn't know we would get angle in a dress.

If the fake Rev. actually goes to a seminary and gets properly ordained Angle is willing to help him. Does that sound like a bribe?
Iam not sure. You say Angle is willing to help some people ? I don't understand first he was a fake Rev. with no church, and does not know what he is talking about, and now he wants to help him when he would not even help his only family. His challenged nephew,
His uncle Jimmey'
just to name a few.
It all seems a little strange.

To be honest, you and your unhealthy session with Angle is a little strange.

A littlt strange to say the least.
Bernie you made a mention about you can't shine shit. Well did you see farmer Angles new flyer out ?
He sure is in alot of shit I don't think that is so good for them cows, should have be shovled out weeks ago. But I do like the idea he does sling alot of shit. lol

And you are so courageous you can't even sign your name, though it's no secret that you're just a kooky Gracedale Goon.