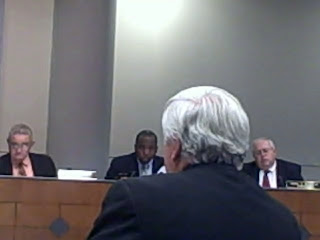 Blogger's Note: I originally published this story over a year ago. I'm running it again, in advance of a news conference by Democrats running for Lehigh County Commissioner. Lehigh County Director of Administration Tom Muller lays explains why, even if you believe that selling Gracedale is what's best for its residents, Lehigh's nursing home should remain County-owned.

Let's shove all the pious proclamations about "moral obligations" aside. Although LC Director of Administration Tom Muller, and Commissioners Dougherty and Hansell threw that term around last night as though they were at a revival meeting, the simple reality is that county government has no obligation to provide a nursing home. And if Cedarbrook were the $6 million money pit like Gracedale is in Northampton County, there is little doubt in my mind that they'd all be just as sanctimoniously talking about their "moral obligation" to the taxpayer.

But if Muller did anything at last night's Lehigh County budget hearing, he established pretty clearly that Gracedale and Cedarbrook are completely different animals. What makes fiscal sense in Northampton County might actually be foolhardy in Lehigh.

Below you'll see a copy of Muller's handout. He reluctantly handed it to me, complaining that I'm the "pseudo press." Then he grumbled that all I ever do is photograph the back of his head, even though even he agrees it's his better side.

Some Commissioners have suggested that perhaps Lehigh should consider selling or leasing Cedarbrook. Muller gave what Commissioner Bill Hansell repeatedly referred to as an "extraordinarily good presentation." Now Hansell thought everyone gave "extraordinarily good presentations" last night, but Muller was so damn good he even convinced the tea party members in the peanut gallery.

Second, Cedarbrook, unlike Gracedale has two facilities in Fountain Hill and South Whitehall. Only South Whitehall is actually licensed. According to Muller, "We cannot sell our beds at Fountain Hill. If we wanted to sell the facility, we'd have to work out some deal where we would sell it to somebody contingent upon them applying for a license, getting a license for those beds."

Third, Cedarbrook is actually projected to earn $3.5 million next year. But because of the debt service on multiple nursing home bonds and the $2.4 million cost of health insurance for retirees, the County will have to kick in $2.1 million. 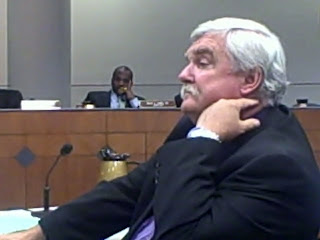 Fourth, if Lehigh were to lease Cedarbrook, it would still lose $932,000 per year. That's because the cost of retiree health insurance would actually increase.

Fifth, if Lehigh were to sell Cedarbrook, it would have to pay off all the bonds and other loans. The retiree health insurance cost would increase, just like with a lease. Assuming a sale for $26.6 million, the County would walk away with just $317,973. [Blogger's note - Northampton County expected to walk away with $35 million].

Muller indicated that "we intend to maintain our four star rating. We have no intention of going below that. The best Gracedale has ever hit was 3.68, briefly, ... . There's a lot of money in those little tenths of a point." Muller also stated that Cedarbrook is getting away from housing four residents in one room to make the home more attractive to aging baby boomers. [Blogger's note - Gracedale has consistently refused to do that under previous management].

Earlier that evening, Cedarbrook administrators indicated that labor accounts for 66% of Cedarbrook's total cost. $10 million of the $65 million budget goes to pay for the defined benefit pension. They are hopeful that baby boomers will fill the nursing homes in the years to come, although they acknowledge another trend is assisted living and care at home.

You show the extent of your bullshitting prowess with you "blogger note" parts. You twist the facts to suit your schizoid view of Gracedale and Cedarbrook. You are truly messed up!
The Doctor!

where are all the whackos defending their pod of puppets?

Easy solution. Both Cunningham and Stoffa are right. The mancrushes are still good and all is right in the universe.

It doesn't make sense of course but in the bizarro world of Bernie it makes perfect sense.

My friend at 1:49, I think the "Bucket" of proposals the GOP gang of 3 (plus 1) have presented is more like a "Colander". Full of holes and better for draining spaghetti then sustaining Lehigh County.

Are they now to suggest we cut back more children in youth services at a time when some families are struggling and those services are needed the most.

I love the way this guy strokes his neck fat during a meeting. Now that is sexy.

He could be like you and pick his nose.

Or like you and sit spread eagle with his fly open, Pervert. Better to stroke your neck fat.